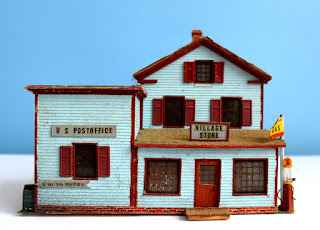 E. L. Moore's Village Store appeared in the January 1978 issue of Model Railroader. In the introduction he mentions that the prototype was based on a picture Ron Delli Colli mailed him. 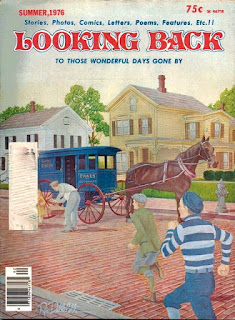 Mr. Moore also mentions that at the time Ron Delli Colli was the cover artist for Looking Back magazine, a favourite of his. That's a 1976 issue with a cover painting by Mr. Delli Colli. That painting is a classic early 1900s scene, and I could easily imagine one of those houses being the inspiration for an E. L. Moore project. It makes me wonder what other covers and pictures from Looking Back became E. L. Moore models. 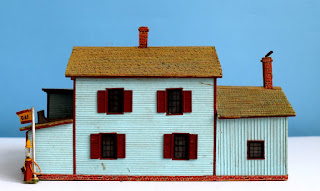 The Village Store is another of those projects that illustrate that E. L. Moore didn't shy away from colour. 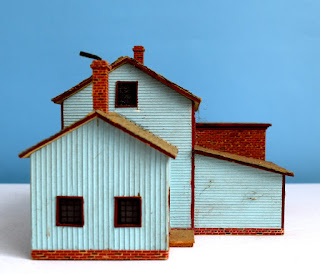 Mr. Moore mentions in his construction articles the colours he used - in this one he states that he mixed a little blue into some white paint - but none of his articles ever featured a colour photo, other than the tribute article that was published in Model Railroader after his death and showed colour photos of a number of his projects. 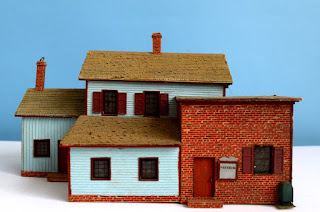 His use of colour - along with seeing his habit of building even minimal interiors in many projects - was one of the pleasant surprises from this showing of E. L. Moore's work. 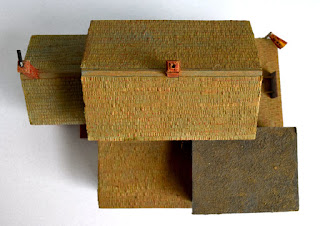 However, the roof isn't a surprise by now. On it, he continued to use his balsa engraving technique for roof shingling. 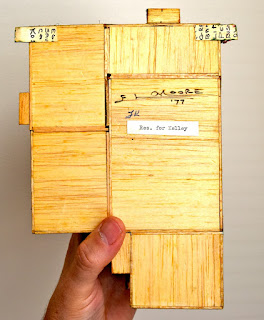