Many of the models I saw had a ‘Reserved for Kelley’ tag on the bottom, or the handwritten initials FK. Kelley and FK are Fred Kelley, a close friend of E. L. Moore. Mr. Kelley was given a number of models by E. L. Moore for use on his layout.

I think the most physically impressive model of the Fred Kelley group was likely this one of the Boston and Maine’s North Conway Station. If the date on the bottom is assumed to be indicative of when the model was completed – in this case, 1977 – then the station was built by Mr. Moore when he was in his late 70s or early 80s. He died in 1979, so this was likely one of his last projects. 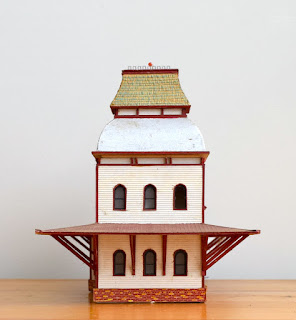 There wasn’t a construction article published, but there was a colour photo in Model Railroader’s E. L. Moore tribute article that appeared in the February 1980 issue.  As I noted in the post about Bart Crosby and Fred Kelley, the December '88 issue of Model Railroader had a railroad you can model feature on the Boston and Maine's Conway Branch, a detailed set of drawings of the Conway Station by Harold Russell, a construction article on how to build a styrene version of the station in HO by George Drury, and a photo of his station model on its cover. 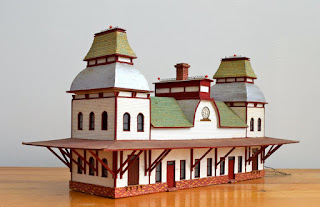 In the picture below you can see that the station dwarfs the rather large Home for Small Locos. 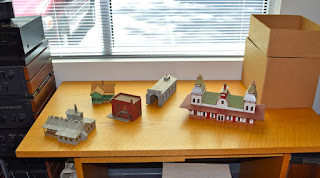