A book, a magazine and a Mt. Lowe trackplan 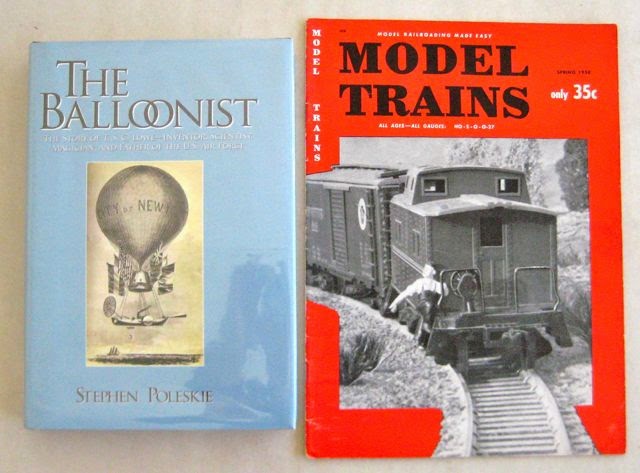 What time I’ve had for hobby pursuits I’ve been continuing on the Thaddeus Lowe trail. Last week I stumbled across Stephen Poleskie’s book, The Balloonist: The Story of T.S.C. Lowe - Inventor, Scientist, Magician, and Father of the U.S. Air Force, published in 2007. It looked interesting, and I ordered a copy from an online used bookseller.  Chapter 4 is entitled, “A New Balloon, an Ascension in Canada, and a Boast of Flying the Atlantic”, and it did indeed have a discussion explaining what brought Thaddeus Lowe to Ottawa in 1858. It turns out some Ottawa ballooning enthusiasts heard about an ascension Prof. Lowe made in Ogdensburg, New York, and they invited him to come to Ottawa to fly one of his balloons at the 1858 festival celebrating Queen Victoria’s decision to make Ottawa the capital of the Province of Canada – Canada didn’t become a country until 1867 – and the laying of the first trans-Atlantic telegraph cable. Apparently his Ottawa flights went very well, and the event was instrumental in establishing his place as a leading balloonist of the time.

As well, I’ve been reading lots of old issues of Model Trains magazine since I’m also still on the E. L. Moore trail. I came across an article called The great Pacific Electric, by William D. Middleton in the December ’58 issue. It’s a 5-page overview of the Pacific Electric Railway that contains an excellent drawing of a well thought-out, although greatly distilled, HO-scale trackplan of the system suitable for a 20.5 x 34.5 foot room. And much to my surprise, the Mt. Lowe Railway is represented in one corner of the plan. Here’s a snippet of the Mt. Lowe section above the incline railway, from Echo Mountain to the Alpine Tavern.

My measurements of that segment suggest it’s around 16 x 5.5 feet.  It’s a somewhat larger footprint than what I had in mind, but it would make for an interesting setup. Also, the whole 20.5 x 34.5 foot plan is one of the few streetcar layouts I’ve seen that embraces Linn Westcott’s omnivagant concept, which I guess shouldn’t be too surprising since the real Pacific Electric was very omnivagant from what I can tell. It’s good that Mr. Middleton seemed to have captured that in his plan.

And one last point. The Thaddeus Lowe trail has been full of random coincidences. Here’s another: his balloon ascension in Ottawa was in 1858, and the trackplan for the Mt. Lowe model railway was published in 1958, close to exactly 100 years later. Yes, my careful picking and choosing of the ‘coincidences’ make them seem more significant than they are :-)
Posted by J D Lowe at 6:15 PM No comments: 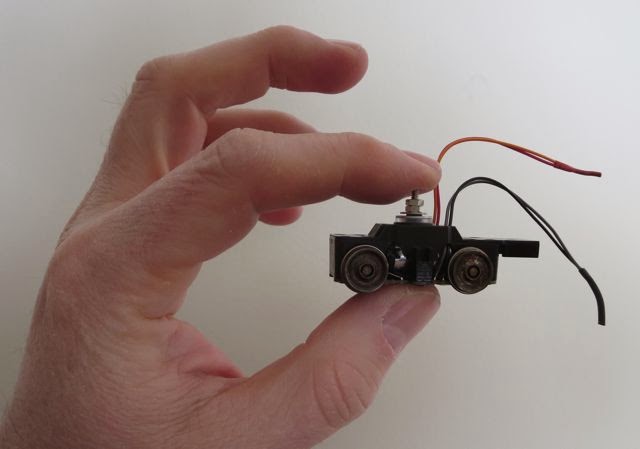 I’m out of the groove model building wise these days. I did manage to put in an order for a small (33 inch diameter wheels and 7 feet between wheel centres) Stanton drive from NWSL. I’m trying to figure out how I can build some sort of model of Thaddeus Lowe’s personal trolley. It’ll likely be more caricature than replica – first of all, his car was narrow-gauge, and the Stanton drive is standard gauge. I’ve never scratchbuilt a piece of rolling stock, let alone anything powered, so it’ll be an adventure. All I can say is that from all the reading of old model train magazines I’ve been doing for the E. L. Moore series, some model railroaders of earlier generations didn’t seem at all reticent to attempt to scratchbuild running locos or trolleys, so maybe there’s hope for this project :-) Right now it’s just dreaming and planning until I can get back to ‘serious’ model building. 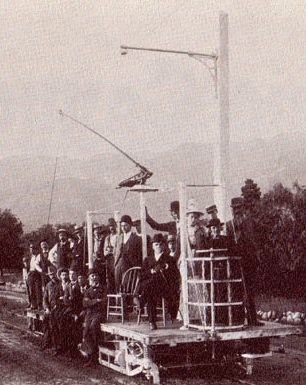 [Sourced from the excellent Thaddeus Lowe website. They state the photo is from the Los Angeles County Library]
Posted by J D Lowe at 6:12 PM 5 comments:

Glidin' on the Gold Line 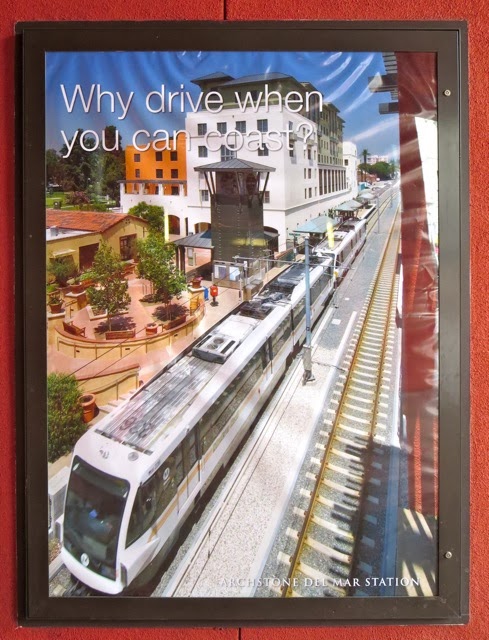 While Debra and I were in Pasadena we had the opportunity to ride the Gold Line light rail train from the Del Mar station to Union Station in Los Angeles. From there, we picked up the Red Line subway and went into the city. 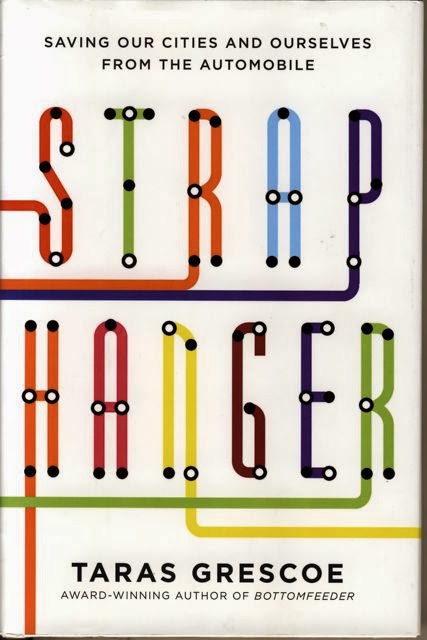 I didn't know there was a light rail system there - or even a subway - until I read Taras Grescoe's book Straphanger. Debra gave me a copy for Christmas in 2012. It's a fascinating account of Mr. Grescoe's travels on several rail-based rapid transit systems around the world, and his thoughts on the future of rail-based commuting. I read the parts about Toronto and Ottawa first as I was most familiar with those systems, and thought those sections would help me calibrate the book - or maybe just confirm by biases :-) They seemed on-the-money, so I had some confidence in the rest of the book. It's not light reading, but it's quite well written, so it goes down easy.

Until I read this I thought people transportation in Los Angeles was composed of just a vast network of streets and freeways - which it is - but, there is also a well developed, and fairly extensive, bus, light rail, and subway system. 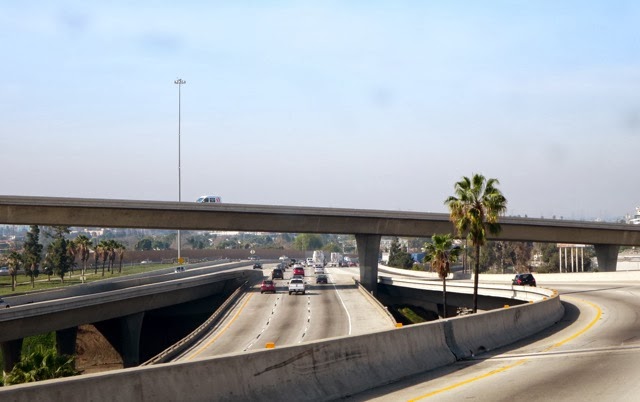 This stretch of highway is mid-day somewhere in Orange County. It looks pretty much free and clear - and it was for awhile - but on President's Day we experienced a traffic jam going into downtown Los Angeles that would try the patience of a saint. Debra and I are still married, so all went well :-)

Jam-zilla didn't stomp on my love of classic cars. Look at this gorgeous Thunderbird. While I was snapping a picture, the owner and his young daughter happened to wander back to their car. The gentleman told me he had inherited it from his mother, who was its original owner. It had sat unused for a long time and he restored it back to its original state. He also told us, like all old cars, driving it was an adventure. There was always some little thing going on with it, but in the end, it was worth any little quirks it exhibited. 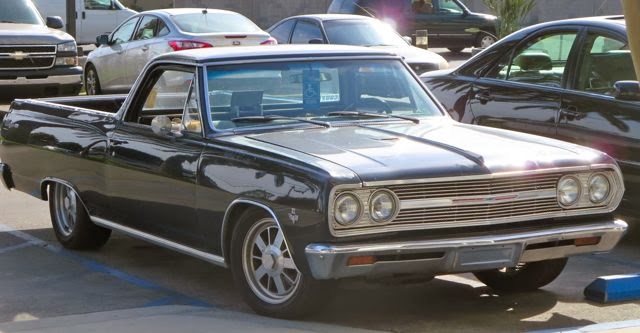 And then there was this El Camino. I didn't get to meet the owner, but it's beautiful even not knowing its story. 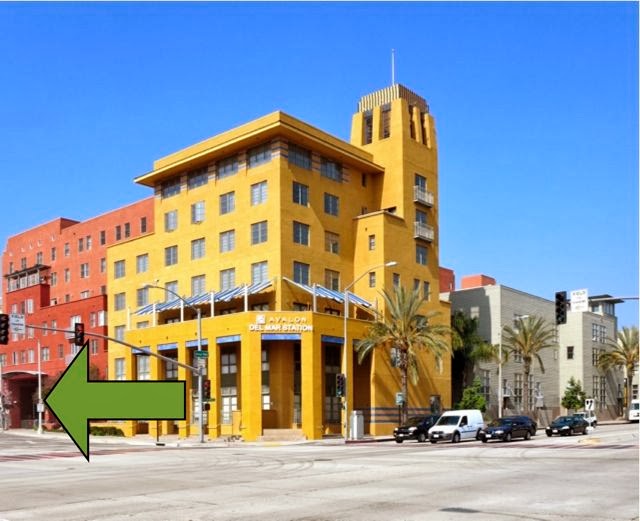 Well, I didn't have a car like any of those to cruise around in, and the massive traffic jam had sort of dulled our interest in a lot of driving, and given the uniqueness of a light rail system in the heart of the centre of the car culture universe, and given my interest in all things even close to streetcars, well, all those ands meant riding the Gold Line was a foregone conclusion.

We were staying a block away from the Del Mar station, which is sandwiched between Raymond and the Arroyo Parkway and has a condo complex built around it. The train enters the station at the opening in the complex at the green arrow. 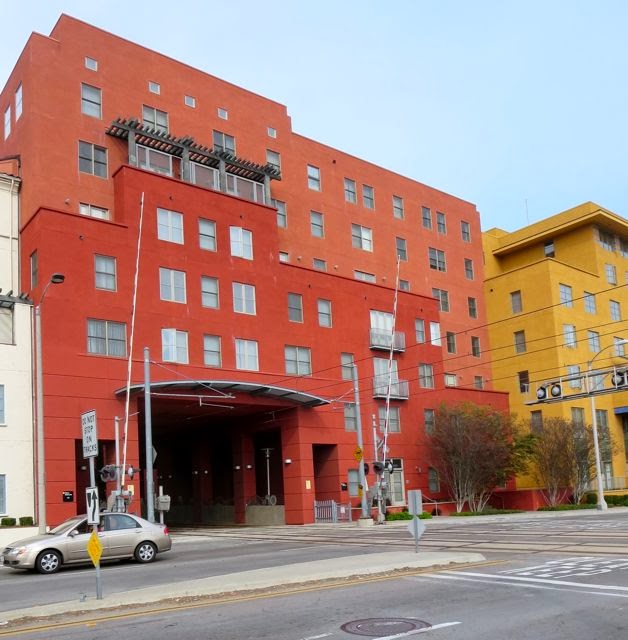 That's a closer view of the station entrance. To get in, the train crosses Del Mar Boulevard ... 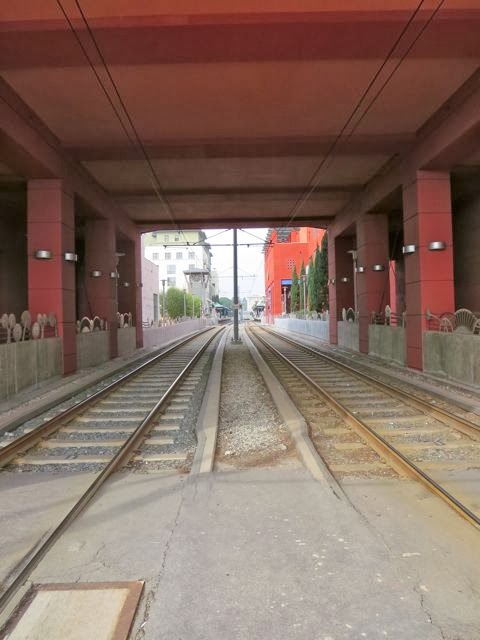 ... and then goes under part of the condo complex to access the platforms. 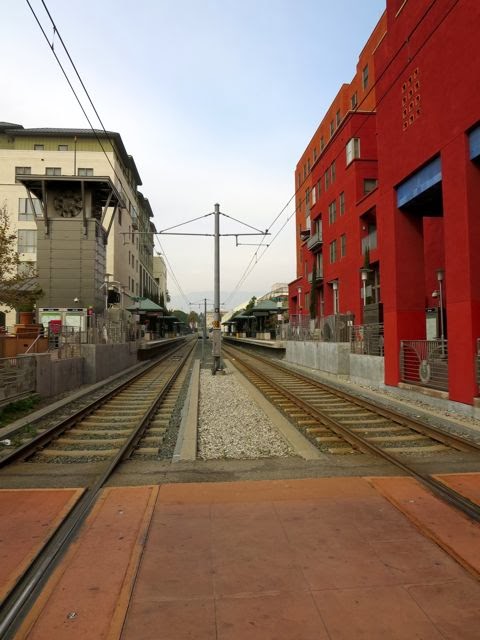 And here they are. The platform on the right goes to the next Pasadena stop, Memorial Park Station, and the one on the left goes to Union Station in Los Angeles. 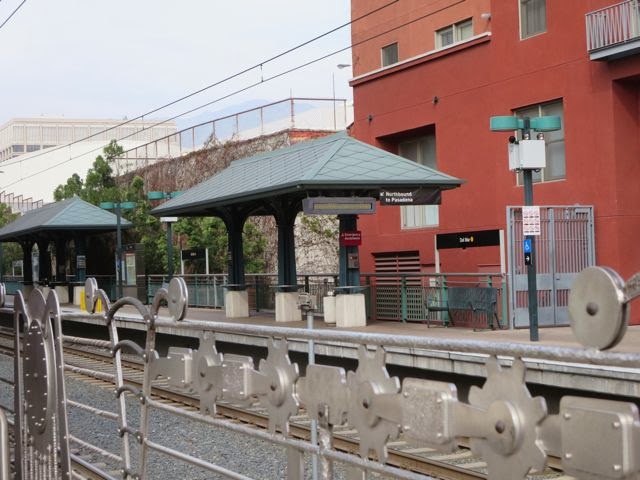 There are some stylish shelters on the platforms, and while I was gawking at them ... 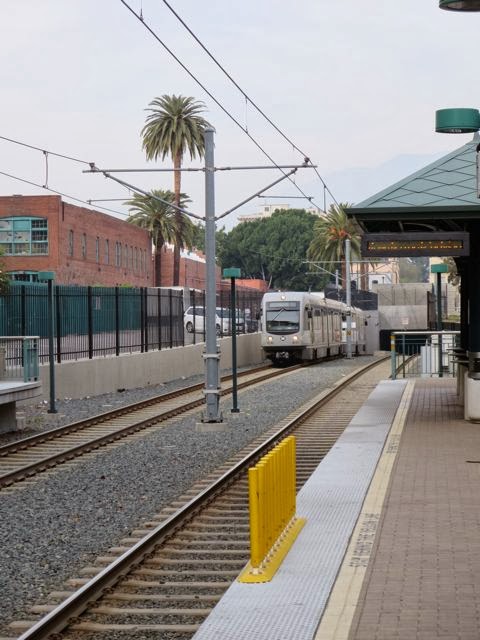 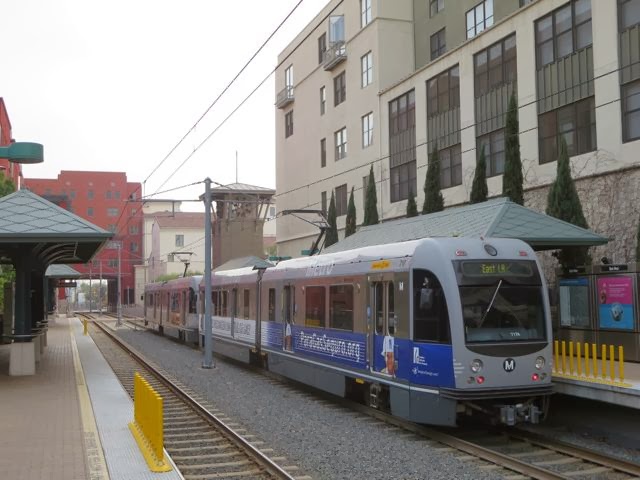 It's an Italian AnsaldoBreda P2550. When we rode it into LA we found it to be clean, comfortable, and fast. As well as fast, it seemed like we didn't have to wait very long for a train to show up at any station along the line, so service was quite frequent. I'm not sure how automobile drivers felt about this as it seemed to me when I was a walking around the city, trains were crossing roads, and barriers were dropping to stop traffic, with considerable frequency. And often when the barriers were down, they sometimes seemed to be down for quite awhile with no trains going by. I don't know what the algorithm was that was controlling them, but I started to wonder if they were frustrating drivers, or if the drivers were used to the algorithm's behaviour.

Anyway, the trains also appeared to be carrying lots passengers. Friendly and helpful ones too. As Debra and I were trying to figure out how to buy a ticket from the platform machine, a young woman gave us a quick tutorial, and within a minute or two we had some tickets and were on our way. 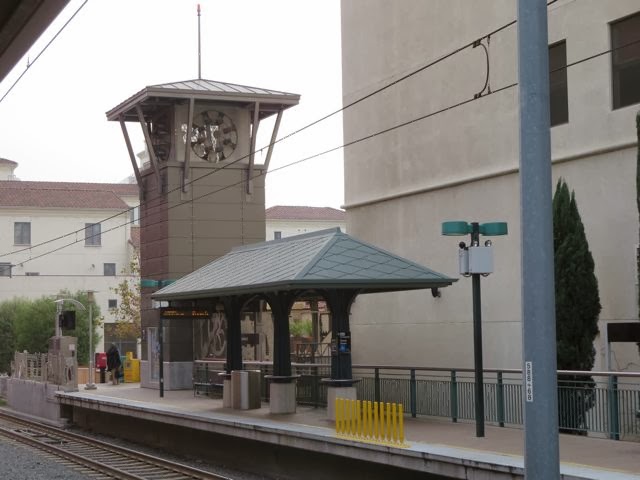 The profile of the tower on the LA platform is clearer once the train has left. 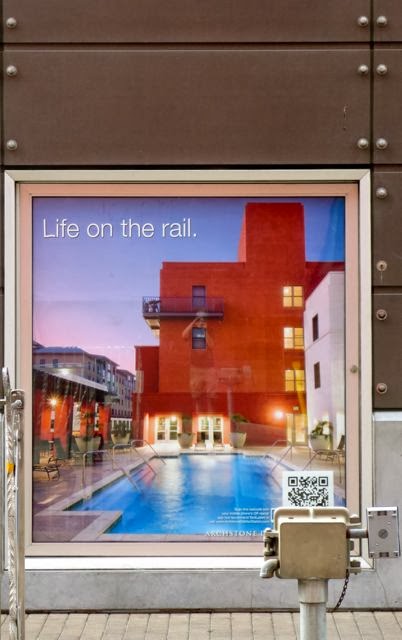 This is the promotional poster near the bottom of the tower. Love that pool. Life on the rail looks pretty good.

Speaking of water, life isn't all freeways and trains. The beach is pretty good too.