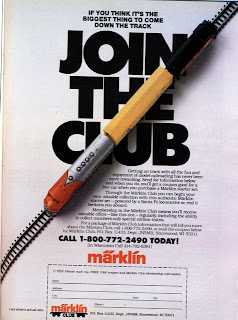 A very dynamic Marklin ad from the November 1985 issue of Model Railroader. It's built on the diagonal much like the Bachmann ad.
Posted by J D Lowe at 6:22 PM No comments: 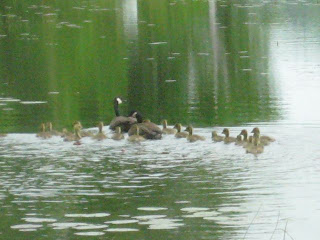 Saw four Canada geese and all these goslings today. I shot the pictures through the windshield of my car since I thought getting out for a shot would spook them. Debra tried to count them and she thinks there are 20 goslings - not all are seen in the photos. 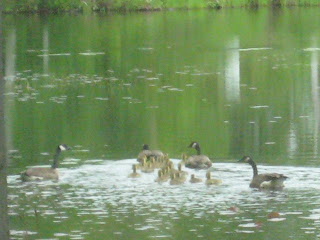 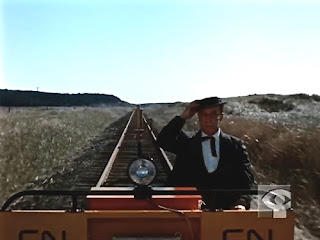 [Image from the National Film Board of Canada’s The Railrodder]

A work colleague of mine, who is a big Star Trek fan, forwarded me this National Film Board of Canada link to William Shatner singing O Canada. It turns out that also embedded in the page is a link to a documentary about the making of Buster Keaton’s movie The Railrodder (a 25 minute short film featuring Mr. Keaton travelling across Canada on a rail scooter). I hadn’t seen The Railrodder in a very long time and it’s as fun as I remember. 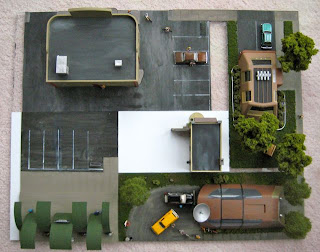 I plan to place Uncle Charley’s Bookery in Scarboro Square. In some ways it seems like an odd location – being so close to the renovated Chapters store as well as being located off the main roads and accessible only by sidewalk.
I look upon the Bookery as a building that has survived generations of redevelopment with some combination of stubbornness, savvy maneuvering, and good luck. The neighbouring buildings from its era have all been torn down and replaced with gentrified retro-modern homes - except for the Chapters which is located in a renovated building from the Art Deco era. One of the reason’s Uncle Charley’s Bookery has survived is that passengers waiting for their train at the Scarboro Square Station can drop in to browse for a few minutes, and later rest in the side garden. It’s become something of an icon to generations of travelers and commuters.
As well as the Bookery, Scarboro Square is also going to be outfitted with many more trees to give it a more settled look. I’ve got around a dozen or so on the shelf waiting to be planted. 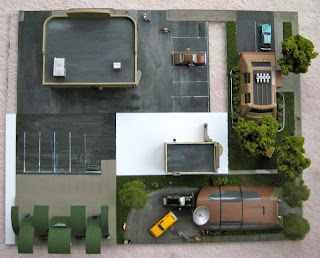 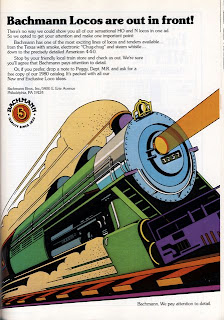 I’ve been thumbing through old issues of Model Railroader magazine just looking for interesting things. I came across this super-graphics style ad for Bachmann locomotives in the May 1980 issue. It reminded me of this AFX ad. Both are cool, but I suspect as far as persuasiveness goes, this style may be better suited to slot-cars than locomotives. 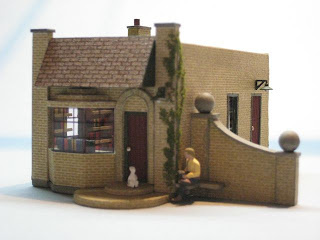 I don’t particularly like vines and ivy on buildings. When we bought our house, the first thing I did was strip-off and kill the ivy growing on the garage walls. I was amazed at how well it had anchored itself into the stucco and it took a lot of effort to remove it all. But, some strategically placed ivy has helped to hide a brick-paper seam on the most prominent corner of the Bookery. From the looks of Mr. Moore’s article, he also used some ivy, so it’s in keeping with the spirit of thing, and it’s ostensibly an old building, so some ivy doesn’t seem out of place. 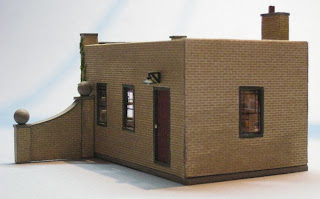 The reason I used this ruse is that I messed up applying the brick paper at this corner. I cut the paper on the side wall too short and it didn’t go all the way to the corner of the end wall, so you can clearly see where the piece ends. If you measure things more-or-less properly, as I did with the other three corners, the edges don’t look too bad. This is a good example where you shouldn’t give up when you encounter something that didn’t quite build-up as planned, but just change course a little to fix it up. 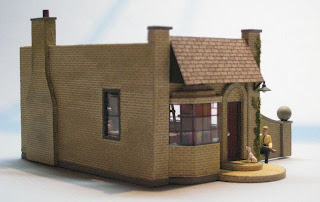 The roof is cut from a piece of 0.080 inch styrene. It has a piece of fine sandpaper glued to its outer surface to simulate some sort of gravel roofing. Mr. Moore states he simply let the roof rest on the top layer of books. I decided to add a rail above the top book shelf and around the inner wall perimeter for roof support – it’s made of styrene channel. 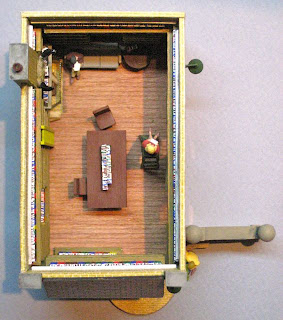 The half wall – which will eventually become part of the larger courtyard perimeter wall – was built-up from styrene and covered with brick-paper. The concrete caps are also cut from styrene. The decorative spheres are 1/4 inch diameter acetal bearings superglued to the wall caps. The corner seat is wood. 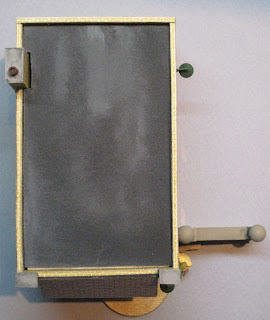 Well, that’s it for the basic structure. It was fun, and at times frustrating. The next step is to site it in Scarboro Square, and build the courtyard and outhouse (which is shown in the photos in the original article, and hinted at in the text, but not described in much detail – it’s more of an afterthought). 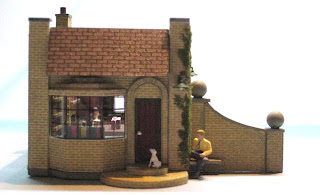 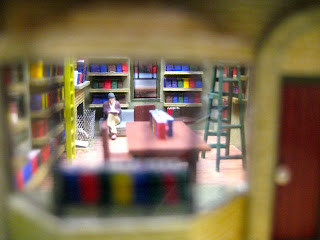 I’m starting to think that if you are going to build some of these old-school projects one thing that needs to be reconsidered is the story around it. On the surface that seems somewhat trivial – and maybe a even a non-starter because although E.L. Moore often had an elaborate fictional back-story for many of his projects, many other writers from that period did not, and their works were simply straight ahead miniaturizations of prototype structures – but it helps to bring these projects into the present, and also sort of help with thinking about how they might have changed and evolved in order to survive into our time.
This update-the-story idea developed when I started to work on the furniture and siting for the Bookery If the Bookery were mine, I’d change the furniture, and since it is, I did. I’d have a big library table to spread out reading and writing materials; so I built one. I’d have a couch so I could stretch out and read a book; so I built one. I’d need some ladders to reach the upper shelves; so I added them. Well, you get the picture. You certainly could rebuild the interior exactly as Mr. Moore pictured it in his article, but I didn’t want an exact period piece, but something that was old, but had been changed a little here and there to better fit with my view of the ‘retro-future’. 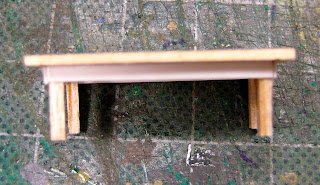 The library table is made from 1/32 inch sheet basswood for the top, balsa for the legs and some 0.010 in styrene for the table-top base frame. 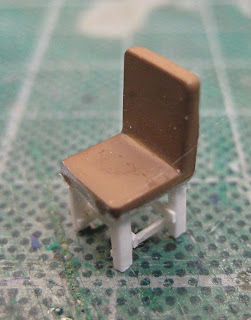 The chairs started out as items from an HO-scale Airfix control tower kit to which balsa legs and styrene cross-bracing were added. 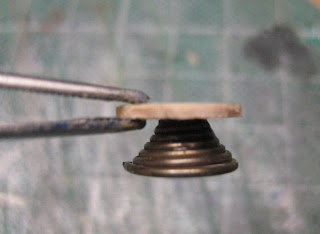 The end-table has a basswood top, and a base made from a bolo-tie component. 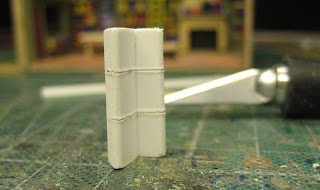 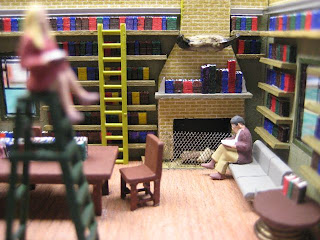 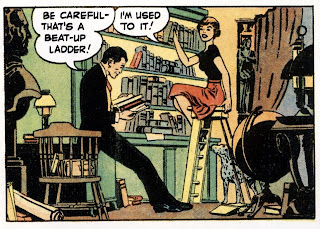 [Jet Scott and Tawney Potter chat in Professor Potter's library]
The lady-on-the-ladder-reading-a-book was inspired by this panel from Jet Scott, Vol.1 by Jerry Robinson & Sheldon Stark (published by Dark Horse Books)– which I highly recommend. 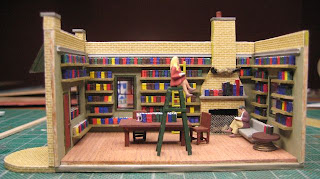 Well, a lot more detail could be added to the interior, but I decided to leave it at this. I’m in the process of closing up the Bookery by adding the remaining side-wall and the removable roof.
Posted by J D Lowe at 2:50 PM No comments: 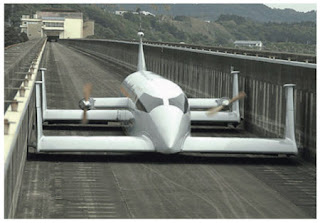 [An experimental ground-effect 'rail' vehicle; Picture sourced from the IEEE article linked to in the post.]

I stumbled across this story about a Japanese research team investigating the use of ground-effect flyers to build completely new concepts in ‘rail’ transportation. It’s still early days, but it’s amazing stuff. You know, with ground effect based vehicles a hybrid rail / water transport is a possibility – maybe something along the lines of some sort of Alexander Lippisch Aerofoil Boat ‘rail’ / water vehicle. The ‘rail’, or I guess land-based channel if you follow this Japanese line of thought, could lead the vehicle right to the water’s edge where it then flies out over the water towards another ‘rail’ on a distant shore. Wild stuff.