I'm taking a little blogging break for the summer. I've got a few things on the go, and my posts are getting a bit stale, so I thought I'd take a break, and the summer is the best time for it :-) I'll be back in the fall, hopefully recharged and refocused with more Moore, streetcars, buildings, and whatever stuff!
Posted by J D Lowe at 12:56 PM 1 comment: 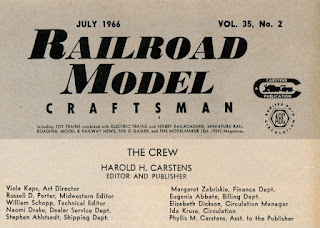 E. L. Moore and Hal Carstens, editor and publisher of Railroad Model Craftsman, had a lengthy and altogether friendly correspondence throughout the 1960s. Although E. L. Moore was 27 years older, the letters have a feeling of friendly, good-natured banter between old friends that usually went beyond pragmatic business correspondence. Many of Mr. Carsten’s letters to E. L. Moore contained suggestions for projects, several of which did become articles in Railroad Model Craftsman. With the other magazines, E. L. Moore mainly either submitted completed articles on speculation, or in later years when the magazines adopted more formal vetting processes, proposals for articles. He submitted plenty of unsolicited stuff to RMC, but the others didn't make suggestions anywhere near what Hal Carstens did. Hal Carstens though liked to push him a bit, and that was good because among other things it resulted in the Enskale and Hoentee Railroad, one of Mr. Moore’s major projects, and kicked off the models that would become plastic kits that are still available today. In the paragraphs below I’ve transcribed some extracts from a number of letters Hal Carstens wrote to E. L. Moore where Mr. Carstens floats some ideas for Mr. Moore to consider.

Fourth, whatever happened to the Spumoni family? You’re an accomplished photographer. How about some good - one or two - possible shots having a strong center of interest, shot vertically and allowing for insertion of the RMC logotype in the upper left hand corner. Either by itself or as a lead photo to an article. BUT it’ll have to be something of railroad interest as opposed to windmills and such pastoral jazz.

How about doing some kind of article for a fall issue in which some kinda structure - not too ramshackle - is used as a campaign headquarters. Maybe a double store in which one side is for the Johnsonians and t’other side for the Lodges or Rockymen or Au2H2O people or whatever. Should auta be kinda fun. Maybe even a band or two thrown in. Hmm? With a suitable cover photo, shot vertical like.

Would like to see some more complicateder opuses, like the factory. Like these ideas - which you may discard if they create grist for your thinking apparatus; two level depot with stairway to the second level tracks crossing the lower. An ancient brick (red of course) warehouse. Even another type of warehouse spelled somewhat differently would be fun altho too many readers would take offense so it must regretfully be bypassed. Operating bascule bridge of a smallish type. What would an abandoned trolley line look like? A sorghum factory would be sorta sweet to see. Etc.

Thinking about new projects, seems to me you should broaden your spectrum. Like the old brick packing houses down by the depot in many larger cities, or wharf and pier, complete with railroad tracks; along the waterfront. And a Tugboat named Annie [Wharf an’ Annie]. Or some kinda old mill or factory in which car rolls under or into the building.

Another idea would be for some kinda old time coaling tower of wood construction. Hard to beat Alexander though with their FM tower of wood. Its a dandy . . .  And I don’t think anybody has ever come up with a practical HO rotating type bridge or an HO lift bridge.

Some one of these days I must commission you to build an old weathered brick brewery or distillery, with slightly more northern construction, for use on my new pike. Construction proceedeth slowly. Wouldn’t do to have vats in the open where various types of nectar would be diluted by rain or damaged beyond repair by frost and snow and ice. In fact the Schaefer Brewing people have a model of their original plant and maybe plans for same could be obtained. Must check this out.

E. L. Moore's Schaefer Brewery project appeared in the March '67 issue of RMC and later was the first of the E. L. Moore projects to be turned into plastic kits.

Another project I have which I’d as leave pass on to somebody else involves the construction of a double track viaduct patterned after the Starucca Viaduct on the Erie, about 24” high and perhaps 3 or 4 ft. long, on a 36” radius curve. HO scale. A glimpse of same in RMC April 1966 issue page 27.

Starting to get the germ of another idea which needs be built all of wood, but which has to be researched out a bit first. Might be right up your alley. Might even relent and let you use balsa wood. Better not say anymore, lest your eyes get tired as you relax on your hammock, is it?

In the railroad line, some waterfront structures with pilings and such might be interesting, and provide a good edging for a layout. Or some kinda terminal station, perhaps stub ended, suitable for a smaller railroad which might still be blessed with half way decent passenger service. Remember a covered platform on the Bath and Something-or-other in Maine back about 1950 that was on a curve and real cute.

A tug boat and barge wouldn’t be a bad article either, if you could do it decently authentic about 1900 vintage . . .  How practical would a model of the old brick structures that was in the RMC Dec. 1965 center fold in the Wallworth painting? And in which our office is? The front would be the roughest part. One side (left) is plain brick with no windows and butts against another building. Railroad side has mostly simple windows not shown in photo or painting, but for which data is available. Rear has since been added to, but was plain brick with a coupla windows, data for which is available. Tower is gone. Be kinda big but cute . . .  A country ice house might be interesting, for trolley lovers so they can have an ice car. Or railroad  . . . But enough. It is summer and I must not wear you out.

Must dig you up some photos and data on early trolley terminals at ferry terminals. Fascinating old beasties in infinite variation, but all with certain common traits: such as sheds over the loading and unloading tracks, return loops, wooden construction, oft a store or two selling railroad workmen’s clothing, or a newsstand. In fact, I know just the photo for you to follow. Must copy same and send you. Right loverly.

New Year and I should find you a nice fancy project to latch into. You’ve already done a distillery, and a brewery, and a mortuary, etc. Take a look-see into Moody Maine Narrow Gauge Book and look at the Maine Central-2 foot Monson (?) terminal, where the one fed the other. Covered train shed, and the NG crossed over the Std gauge. Believe I have seen further pix. Maybe Crittenden has more. Was all wood. Quite simple really.

A working HO turntable article hasn’t been done in many a moon, especially if it could be rigged for remote control, as Lionel would say.

More great ideas: a wooden coal mine where cars roll underneath and mine is on hill...a small ferry terminal where trains and trolleys terminate . . . The arts of modeling a big city using 3rd dimensional backdrop techniques to save space. Elision was a great one with this . . .  How I built a model railroad suitable for HO or N: framework, track and roadbed, scenery, etc. Maybe you have better ideas.

That second last sentence, How I built a model railroad suitable for HO or N, would kick-off the Enskale and Hoentee Railroad project that appeared in RMC at the end of the year.

So - cheers. Hey, maybe some time I’ll send you some photos of Bumble Bee* and let you try your hand at modeling a whole bloody town: big cabin, 5 smaller cabins, abandoned schoolhouse, a coupla sheds and chic sales, a general store, a gold mine-hole-into-the-ground sorta thing, and a dirt road. Should set the great society back about 75 years.

[*Updated 19 July 2016: I didn't know what 'Bumble Bee' referred to until I read Hal Carstens' article The First Fifty Years in the March 1983 issue of Railroad Model Craftsman. In it he notes, In 1956, the Penn's [Charles and Helen Penn, the previous publishers of RMC] bought the town of Bumble Bee, Arizona, and built a number of full-size false front western buildings from HO construction articles which had appeared in RAILROAD MODEL CRAFTSMAN - modeling on a grand scale!]

Ever think about doing a real covered depot like they dang Yankees used to make because of the cold snowy winters? Or snow tunnels like they had in the mountains for the same reason.

In discussing a contemplated article with people here, it was thought that it might be interesting to see what Mr. Moore, of Charlotte, could turn up on the following subject:

A typical fantrip scene, with a big engine at the head end of a mottly looking bunch of passenger cars, definitely including a baggage car with the doors open and two wood slat stuck across so as the faithful won’t fall out. A dining car where the railfan establishment can watch the scenery whilst fortified with good Yankee applejack. A railfan making off with a bell offn a loco. Another railfan sound recording the engine. A coupla guys taking loco pictures with 1000 railfans in front. Another railfan measuring a spike. Three railfans in the cab. A railroad cop chasing three more railfans offn the track so No. 1 can go by at 80mph. Etc.

Just in those letters alone, Hal Carstens tries 5 different times to suggest projects of interest to trolley modellers, but E. L. Moore, being admittedly not interested in trolleys, never took the bait.
Posted by J D Lowe at 4:02 AM No comments: