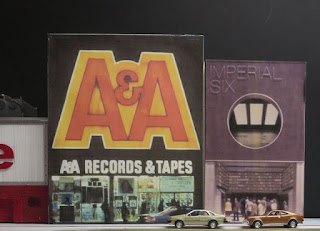 Another one on my list of possible buildings for the Alta Vista TC is the old Imperial Six movie theatre. As with the A& A mockup, I was lucky with this one too, and was able to find a fairly good photo of the facade that doesn't have a lot of perspective distortion. 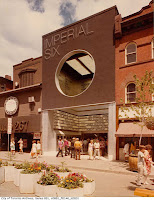 A City of Toronto Archives photo of the Imperial Six in its heyday.

It has a great look and is unlike most other movie houses. More importantly, it says 'Toronto' to me. 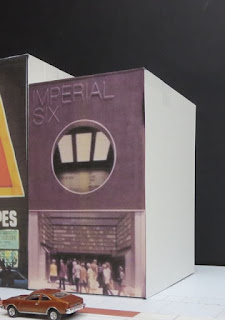 These mockups are just boxes folded up from bristol board with an HO scale image printed from my computer taped to the front. When I look at the Six the people still seem a bit too large - they might be OO in the image - but the building itself doesn't look too bad. I'll have to ponder this one a bit more because I'm still a bit uneasy with the dimensions. 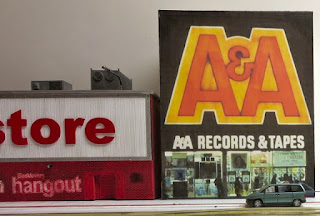 I'm fiddling around with ideas for scenes and buildings on the Alta Vista TC. One of my bucket-list builds is A&A's Yonge Street store, which was demolished many years ago. I found quite a number of pictures online, and even one that seems to be suitable for use as a template for the facade. 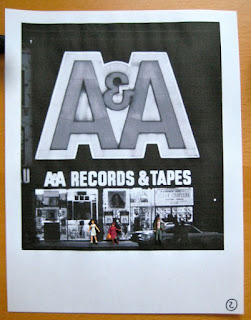 I sliced the facade from the larger image, and fiddled with the size until some HO figures were just about the same size of the silhouetted figures on the sidewalk. I'll use the b&w image for creating the parts - although a number of the shapes will need to be straightened up - and I printed a colour version for a mockup to see how it might look on the layout and get an idea of its size. It's a little bigger than the prototype, but it looks about right, and the little extra height will increase its presence. 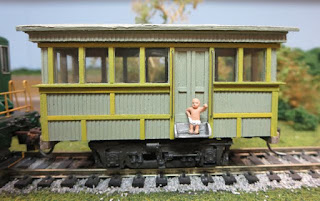 Cal and I got the Spumoni Club Coach out of storage to go on an inspection tour of John's legendary 8 Paws RR.

However, Engine 38 had other ideas: try as we might it wouldn't go. No lights, no budging, no creeping, no movement of any kind. It wouldn't go. 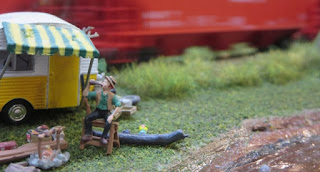 We walked over to the stream to see if we could find someone to help out, but the only person we found was pursuing his own hobby. 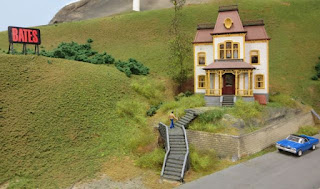 We then headed down the road a piece, but the hotel gave me the creeps for some reason so we kept walking. 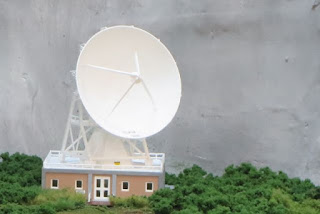 We were getting a little desperate and thought about contacting nearby interplanetary craft for a pickup. 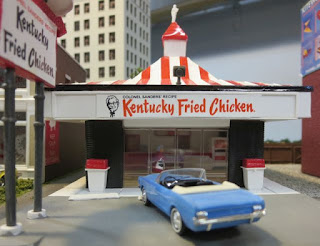 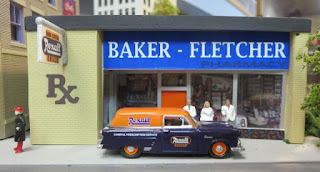 Followed up with some pepto, a diaper change, and a phone call home for a ride. Hopefully we'll get ol' 38 fixed up soon for a proper tour.
Posted by J D Lowe at 8:53 PM No comments:

The Dog Days of Summer 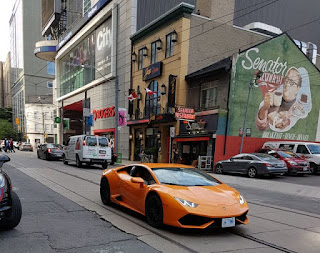 John sent me a photo of a new street-car he saw cruising the TTC's rails in Toronto this summer.

Galen tipped me off to these two great videos of the Lisbon trams.
Vince sent me a link to this inspirational model building video.
And a great vendor on Abe sent me this awesome book published in 1944  - after suitable payment of course :-) 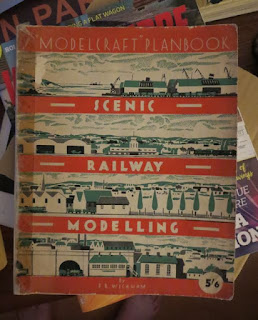