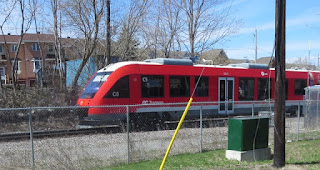 I took a couple of long walks over the weekend. It was the first stretch of consistently beautiful weather we've had after nearly 6 months of winter. Not wanting any good weather to pass me by, I'll be taking a blogging break until the fall. I can still be contacted by comment or email. Have a great summer!
Posted by J D Lowe at 5:58 PM 4 comments: 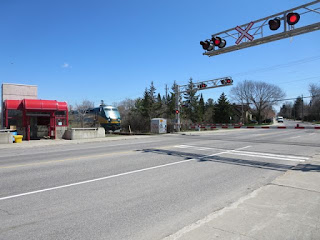 I was on my way home from the store and got to the crossing at just the right time. 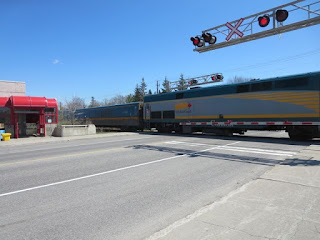 It's likely on its way to somewhere west of here, Toronto maybe. 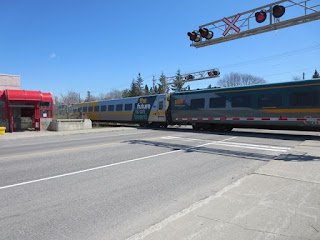 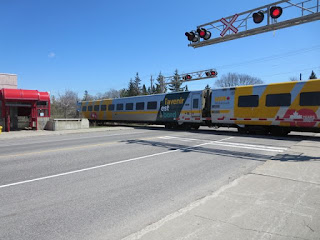 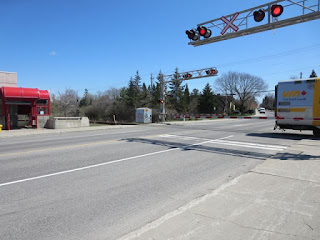 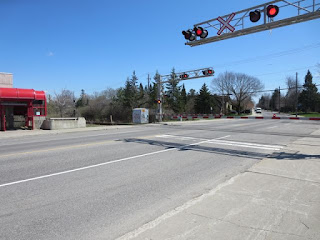 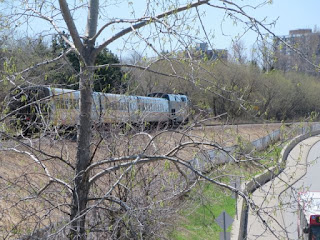 The trees haven't leafed out yet. The winter has held on for a bit longer than normal and things are only now beginning to look spring-like.
Posted by J D Lowe at 6:08 AM No comments:

Band of Outsiders: Paris, two men, one woman, and a convertible 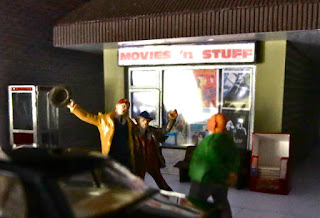 Band of Outsiders isn’t a movie to watch for the story. Jack Webb could have easily distilled the plot and poured it into a half-hour episode of Dragnet or Adam-12 without losing any flavour. 1-Adam-12, 1-Adam-12, robbery in progress; two men, one woman in their twenties; one suspect armed; be on the look-out for dirty French convertible. What it is, is a movie for looking at and being amazed at what you’ll see. The setting is Paris in 1964 [1], shot on location in the streets, houses, fields, cafes, shops, businesses and the everyday world of the non-glamorous, work-a-day milieu of the Paris we don’t often see in movies. But Paris being Paris, this world is still something to behold. Paris isn’t just a backdrop in this movie, it’s a dynamic character that Godard and his human characters make full use of [2].

The Internet tells me this great dance sequence is famous.....

Now, don’t get me wrong, the human characters are just as attractive and dynamic. This isn’t a stodgy time-traveling documentary of a long gone Paris. Just don’t look to the characters to be stock types whose only jobs are to be puppets for moving the plot forward.

... and inspired this equally famous one in Pulp Fiction.

Look at it this way, in passing I mentioned to Peter that this movie was a crime noir. He disagreed, and he was right, except for this one aspect: in Raymond Chandler's Philip Marlowe novels the plot is somewhat secondary, the action is in hanging out with Marlowe, driving L.A.'s freeways, visiting the seedy bars and clubs and houses and offices, questioning the perps, fighting the hard guys, getting slugged and escaping by the skin of your teeth just to wind up in the police chief's office with a bad head and hang-over and doing it all over on a couple hours sleep after some whiskey and scrambled eggs (and there's the dialogue, but we'll talk about that in a later post). The Band can be viewed in the same way: focus on what the people are doing and not so much on the plot, which is just a simple framework for hanging things together. This isn't high school, not caring about the plot isn't a problem, there isn't any test.


The only question left for me is: what is the convertible the leads are driving around in? Run it through a carwash, polish it up, slap on some mag wheels and it wouldn't be out-of-place on those L.A. freeways :-)

Yup, that’s just about the way I figured Mr. Zip. I got him down as Mr. Efficiency, which is not meant to be derogatory, but all editors get thataway and want to be as terse as possible and not waste any white space. But I am plumb tired of being dry and factual so I writ it just about as it went and you can tell Mr. Zip he oughta be thankful I didn’t stick a book review in the middle of it and maybe too a recipe for rhubarb pie ...

At its most general, it seems like a relatively untrod path in model railroading writing - branching out from purely instructional and progress report writing - and I'm trying my own experiments. This and a few others are in that vein. I don't know where this will go, but it seems like one way of exploring E. L. Moore's legacy and we'll see what happens.

[2] I've contended that E. L. Moore was a modeller who used model railroading as his story telling machine almost as if he were using it to create movies. Band is something of a lesson in this approach for streetcar layout builders. There aren't any streetcars in the movie, but it uses everything to tell the story. Buildings aren't just backdrops, but sources of action, much like in a E. L. Moore photo.
Posted by J D Lowe at 8:35 PM 1 comment:

Vince sent me the link to this short video. Although it's by a professional architect and model maker, its basic message is something I too have been thinking about for awhile, but haven't been able to express anywhere near as well as this video.
Posted by J D Lowe at 8:55 AM 4 comments: