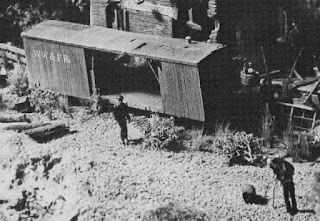 
The photographer, with his camera and tripod (wire, balsa and a jewel for lens) has a bit of Kleenex for a focusing cloth, and his head is stuck to the back of the camera with liquid solder.
E. L. Moore explaining how he built his photographer - his alter ego - from a Weston Flexible Freddie in Put Your Figures to Work that appeared in the July 1957 issue of Model Railroader.

I saw that scene in the photo, with the Moorian photographer in the lower right corner, in the lead photo to The Saga of the Elk River Line that appeared in the May 1970 issue of Railroad Model Craftsman. If you recall the post The Adventures of E. L. Moore, Train Photographer, you'll notice the similarities of the photographer to E. L. Moore's are, as Yogi Berra might say, very similar. My guess is it's all a coincidence, but illustrates that a man with an E. L. Moore fixation thinks everything relates in some way to E. L. Moore :-)

P.S., Dave Frary and Bob Hayden's Elk River Line series that appeared in RMC during 1970 is another classic series and is well worth looking up.
Posted by J D Lowe at 7:46 PM 2 comments: 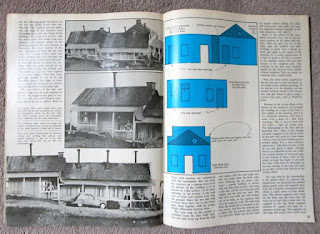 In early November '72 E. L. Moore received this letter from Al McDuffie of Associated Hobby Manufacturers in Philadelphia.  AHM was the company that produced plastic kit versions of a number of E. L. Moore's RMC projects. Ma's Place was one. 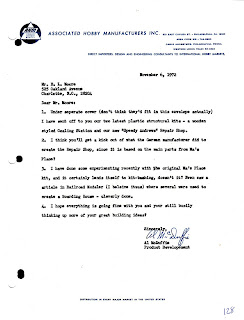 1. Under separate cover (don't think they'd fit in this envelope actually) I have sent off to you our two latest plastic structural kits - a wooden styled Coaling Station and our new "Speedy Andrews" Repair Shop.

2. I think you'll get a kick out of what the German manufacturer did to create the Repair Shop, since it is based on the main parts from Ma's Place?

3. I have done some experimenting recently with the original Ma's Place kit, and it certainly lands itself to kit-bashing, doesn't it? Even saw a article in Railroad Modeler (I believe it was) where several were used to create a Boarding House - cleverly done.

4. I hope everything is going fine with you and your still busily thinking up more of your great building ideas?

The boarding house was Emma's Boarding House by Jeff Scott that Railroad Modeler ran in its October 1972 issue under the title The Holiday Inn It's Not. It's a rambling structure that used 2 AHM Ma's Place kits and a bunch of odds and ends. Ma's Place has had a life somewhat similar to Dilly Mfg. Co. / 8-Ball Loco Works: it has persisted in many forms and in many places from the time it was first created right into our era.
Posted by J D Lowe at 7:56 PM No comments: 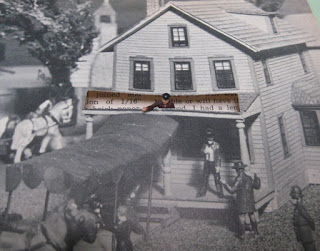 I'm reading through my boxes of RMCs and when I got to page 37 of the Nov. '67 issue of Railroad Model Craftsman, I noticed the previous owner had carefully sliced out the sign from E. L. Moore's W. E. Snatchem - Undertaker article. If you're out there and reading this post, send me a photo of your model if you did build it and you've still got it. It's good to see evidence of interest in an E. L. Moore project :-) 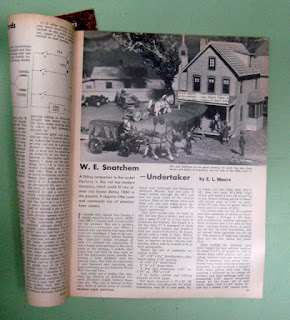 E. L. Moore did not inspire The Farmers Market 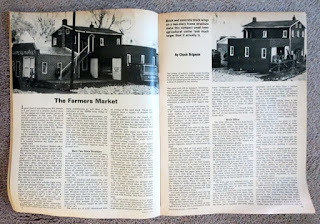 I grew tired of subsidizing my HO farmers, so I cast about for a suitable market place for the apples and other produce grown in such abundance in this area. The grain elevator, stock yard, etc., didn't begin to provide adequate outlets for the enterprising residents of my 1:87 domain. I got so desperate that I even went down to Charlotte last spring and visited E. L. Moore, hoping to filch an idea, but no luck.
The opening paragraph to Chuck Brigman's The Farmers Market that appeared in the March 1970 issue of Railroad Model Craftsman. E. L. Moore 'did not' inspire this model :-)
Posted by J D Lowe at 7:25 PM 2 comments: 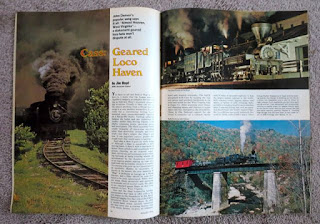 Turns out there was one more of E. L. Moore's likes buried away in his correspondence. The article Cass: Geared Loco Haven appeared in the August '72 issue of Railroad Model Craftsman and it's chock full of geared locomotive goodness. Eight pages stuffed with great photos and text. Is this the last note on Mr. Moore's likes, I think so, but that's what I said a few days ago :-)
Posted by J D Lowe at 6:53 PM 2 comments:

Was this the first occurrence of the 8-Ball Loco Works? 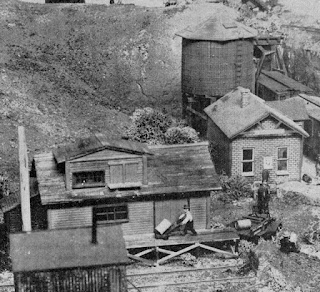 In the course of the ongoing 8-Ball Loco Works / Dilly Mfg Co. discussion I came across this photo - sliced from a larger one - in the June 1950 issue of Railroad Model Craftsman. The location is Bill Livingston's layout, the Venango Northern R. R. I think this is the earliest photo of the model - appearing around 8 months before the article describing it did in the Feb '51 issue. It also appeared in the Oct '50 and May '51 issues; maybe others too, but that's all I've been able to spot so far. With Mr. Livingston noting he first built it 1949, the publication dates for other occurrences likely won't get much earlier than these.
Posted by J D Lowe at 6:51 PM 2 comments:

It was right in front of my eyes! 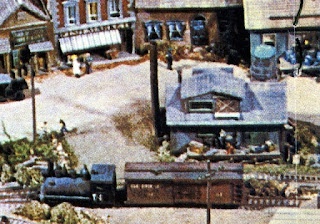 [Bob Hayden's 8-Ball Locomotive Works dead in the middle of the Thatcher's Inlet layout. Image sliced from the layout overview picture in the Feb. '72 issue of RMC.]

While reading through the Thatcher's Inlet series a bit more closely I realized another bit of E. L. Moore lore was positioned dead centre in the layout: Bob Hayden's 8-Ball Locomotive Works, aka, E. L. Moore's Dilly Manufacturing. Longtime readers may remember I wrote a lengthy analysis of the 8-Ball Loco Work's lineage. That building has a long and storied history that dates back to the Feb '51 issue of RMC to an article called Eight Ball Locomotive Works by Eric Brunger with plans by Bill Livingston. This building is never specifically called out in the Thatcher series, and highlights how the search for Moorian stuff doesn't always rely on just the written word. 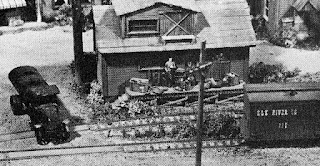 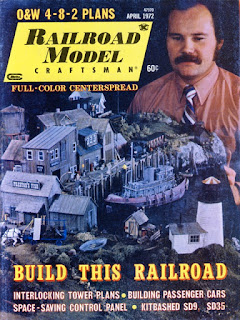 Dave Frary and Bob Hayden's series on how they built their Thatcher's Inlet layout appeared in the February, March, April and May 1972 issues of Railroad Model Craftsman. It's one of the greatest series published in the model railroading press and is well worth anyone's time to read. And yes, E. L. Moore makes a very oblique appearance :-) In part 4 it's mentioned that AHM's Ramsey Journal Building was used as the basis of the kitbashed Ship's Chandlery. The Ramsey Journal Building was AHM's kit version of E. L. Moore's project of the same name that appeared in the December 1967 issue of Railroad Model Craftsman. 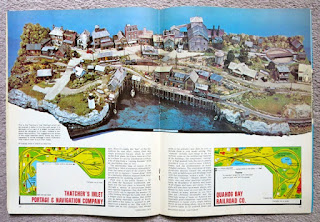 This is the third post in what is turning out to be a short series on articles E. L. Moore liked: the first was Train Wreck & Golden Quill Mining and the second was E. L. Moore's January 1970. I don't think there are any more mentions of likes or dislikes in his writings, but if there are, you'll be sure to see them here :-)
Posted by J D Lowe at 8:24 AM No comments:

Question: Was this the inspiration for E. L. Moore's Rocky Ridge Depot? 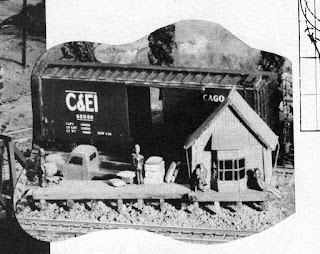 [A small station on the HO Kansas City South Park Railroad as shown in the February 1958 issue of Railroad Model Craftsman.]

I had some fun building an N-scale version of E. L. Moore's Rocky Ridge depot a few years back. Mr. Moore published it in the April '64 issue of Railroad Model Craftsman, and in the introduction mentions having built my first one some ten years ago. I'll assume his recollection of dates is correct, so that places it in 1954, well before the 1958 publication date of that photo. This is something I often wrestle with on the E. L. Moore trail: trying to make sure dates make some sense in linking potential inspirations to E. L. Moore, and trying to make sure I don't jump the gun on attributing things that may have been fairly commonplace in an earlier era with some insight unique to E. L. Moore.

In this situation, so far it's just an interesting coincidence. Maybe the two projects have a common ancestor, but only time and continued reading might tell.
Posted by J D Lowe at 12:15 PM 6 comments: 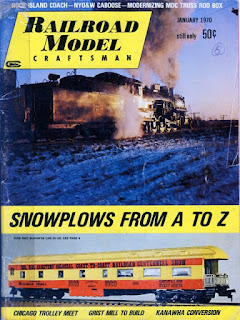 Nice snowplow article by Delaney, and although I'm not a traction fan I enjoyed TRACTION WEEKEND thoroughly. Keep up the good work.
E. L. Moore in a letter to Hal Carstens dated 28 December 1969. Mr. Moore seemed to have a thing for snowplows and built ones for both the Eagleroost & Koontree and Elizabeth Valley RRs.

The January 1970 issue of Railroad Model Craftsman must have been a bit special to E. L. Moore, because as well as those two articles he found interesting, the issue also contained his Chittenden County Mill project and this photo of the Yank Mfg. Co., built by Mr. Ronald Kuykendall of Tucson, Arizona, that appeared in the Boomer Trail section. It was based on E. L. Moore's HOJ POJ Mfg. Co. that appeared in the April '69 issue of Railroad Model Craftsman. 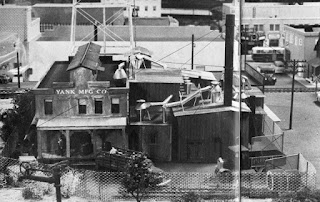 [Longtime readers of this blog might recall the restoration I did on Mr. Moore's HOJ POJ Mfg. Co. Seeing this rendition of the project was fascinating. As well as being an all round fine model, Mr. Kuykendall did an excellent job on that piping and dust collectors - those items stumped me and I resorted to plastic!]
Posted by J D Lowe at 3:55 PM No comments:

I did some soldering. Ok, not much soldering. Just enough to do a test loop around the track. And enough to realize I need to get rid of my battery powered Weller iron and replace it with a plug-in fine point if I ever want to do some quality soldering on the EVRR. 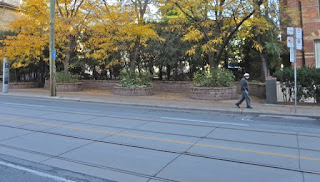 [Some streetcar track near the Art Gallery of Ontario. I took this photo late last October.]

Nothing on the layout is reminding me of Toronto, but it's early days. I think I need to do a little work on the road and fiddle with some building placement. 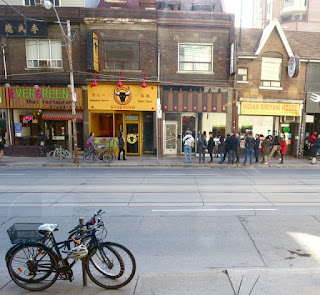 Getting the road colour right is going to be a bit of a challenge. On the LOL some roads came out ok, others weren't so good. 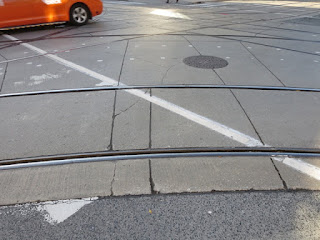