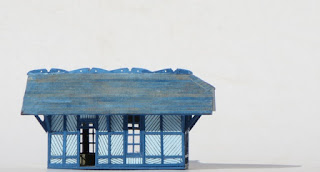 [The digital camera is a harsh mistress :-) This is the back wall on the N-scale Grizzly Flats depot model.]

If you're a longtime reader here you may recall the N-scale Grizzly Flats depot build based on E. L. Moore's HO scale version that appeared in the March '62 issue of Model Trains. I noted there were no photos or plans showing the back wall and speculated that maybe he didn't note it in order to speed up the project. I stumbled across a short article on the Grizzly Flats depot in the July '73 issue of Railroad Modeler and it had this to say about that wall,

The fact of the depot being a prop led to the condition of the rear wall being without any windows or doors. We have, therefore, taken a little artistic license and proposed a slightly different rear wall from the plain on the actual structure.

They presented a full-page, HO-scale plan of the depot and inset this speculation on the back wall. 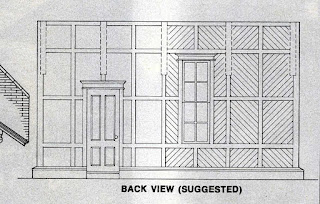 [The Grizzly Flats depot plan was drawn by Ralph Dockham.]
Posted by J D Lowe at 7:52 AM No comments: 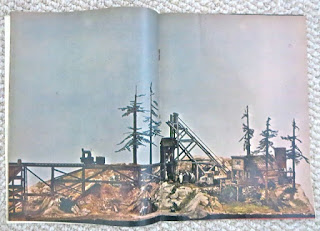 [Golden Quill Mining Co. by Herb Ballinger, Railroad Modeler, January 1972. I'm partial to large, text-free images that speak for themselves and was impressed by how RM chose to present this diorama. What a great scene. Excellent modelling, not over done and a fascinating asymmetrical organization.]

That Golden Quill Mining Company in the January issue was a dilly . . . Train Wreck was good, too. Keep up the good work.
E. L. Moore in a letter dated 18 January 1972 to Denis Dunning, editor of Railroad Modeler magazine.

Golden Quill Mining Co. by Herb Ballinger is an article in the January '72 issue of Railroad Modeler. One thing I've admired about that magazine was it broke from the visual style and layout form long established in MR and RMC. RM often used creative 2-page spreads with high visual impact. Golden Quill Mining Co. and Train Wreck! are excellent examples. 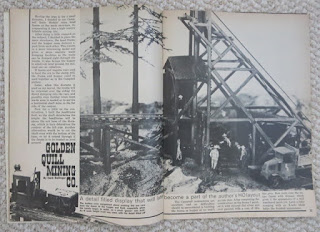 It's interesting that Mr. Moore singled out the two articles in the issue that dealt with dioramas - ones that focused on visual storytelling. 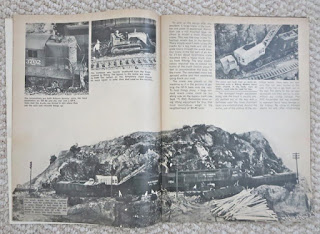 [An overall view of the Train Wreck! diorama. I couldn't find a name associated with the article or the diorama, but if I come across who built this, I'll update the post.]

The Train Wreck! diorama is an 18" x 36" selectively compressed diorama of this scene on the left. I like how the article's bold title spans across two pages to dramatically tie the prototype image to the text. 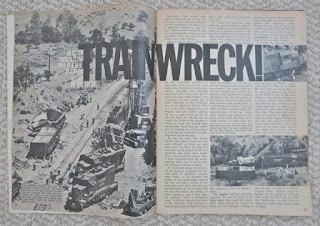 I have to admit I'm not a big country music fan, but when I posted that Glen Campbell, Willie Nelson video in the last post, I dove into YouTube's Glen Campbell videos and played all I could find. Wow! Great music. Memories came flooding back. I highly recommend a long detour into Glen Campbell's songbook.
Posted by J D Lowe at 6:51 PM 2 comments:

Did you bring the boxes? 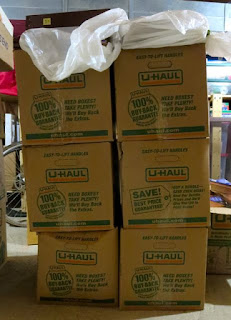 Over the weekend Vince and I acquired a collection of Railroad Model Craftsman issues that date from the 1940s to 2010. That's them in the 6 cartons, and - as a special bonus - on top, in the bags, is a large collection of Railroad Modeler. All Debra and I had to do was go on a 1,300 km round-trip across the province to pick them up :-) Well, road trips are what we do, and there were thrills, spills, and chills, but in the end: Mission Accomplished! I have my suspicions that E. L. Moore sourced the track plan for his Elizabeth Valley Railroad from a '40s or '50s issue of RMC. No doubt there are lots of interesting discoveries ahead, but while I'm getting a car wash, I'll leave you with Glen and Willie.
Posted by J D Lowe at 6:28 PM 2 comments:

A spin on the Neville Park Loop

It's just a little 7" radius loop, but boy it was tough to install. 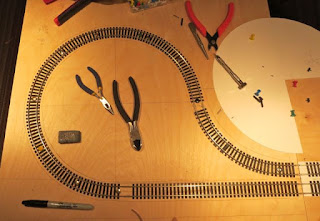 It's made of 3 pieces of Atlas flex-track. The 3/4 loop - and it is a perfect circular arc not the semi-ellipse of that slightly distorted photo - is cut from one piece, the long exit straight is the second, and that entry transition is the third. 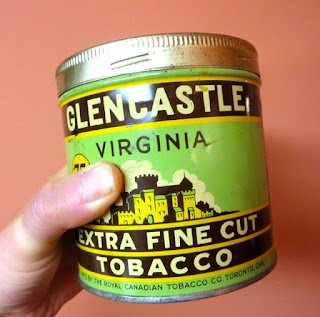 The transition piece had a little special preparation before installation. First, Atlas flex has more-or-less all the ties interconnected on one side, and every other tie connected on the other. To make the piece more flexible I removed every other interconnection from the first side, so that it was as flexible as the other. Then the track was carefully wrapped edge-wise around the perimeter of that old tobacco can (I use it for stashing old screws and nuts, so it's heavy). This gives the track a slight built-in curvature. After curving, the track was trimmed a bit so that the rail ends that join the loop have been curved by the can - this helps get a little better joint between the transition and the loop. 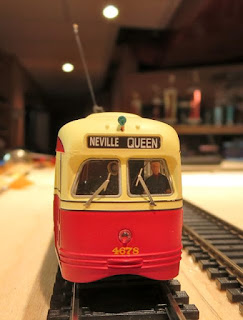 That's all the track installed on the new streetcar layout. I hear a soldering iron - and summer vacation - calling my name :-)
Posted by J D Lowe at 8:06 AM 2 comments: 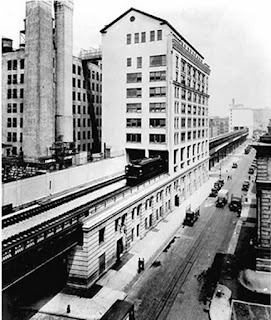 Now a railroad terminal building with tracks underneath and offices above, if I can latch onto a starting idea, I might develop something along that line.
E. L. Moore in a letter to Hal Carstens, dated April 2, 1969.

E. L. Moore didn't publish a project about such a railroad terminal and so I'm left to wonder what he might have done if he had pursued this line of thinking. There are certainly many large terminals with such an arrangement, but that one in the picture is my candidate. Ok, it isn't a terminal, but it was built between 1896 and 1898 - well within E. L. Moore's favourite era - and does have tracks underneath and offices above. And, given its straightforward shape, it would selectively compress without wrecking its character. A smaller version could use a variety of possible surfaces - brick, stone, concrete - so there's room to inject your own style. Not to mention, that when lit up, there would be some great night scenes with all those windows. This would be an interesting Neo-Moorian project. Two 1969 dollars and two weeks of work? :-)
Posted by J D Lowe at 7:10 PM 2 comments:

The streetcar loops around quite well in what will be the west end suburbs. But, this is the second attempt at track installation - my first attempt had to be torn-up because streetcars derailed like crazy on every bend. 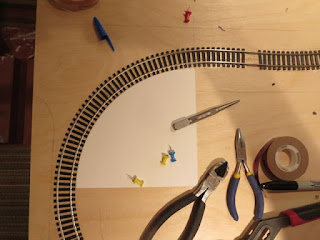 I didn't pay close enough attention to making sure the track made perfect circular arcs and that caused derailments. On the second try I used cardboard templates to help lay the track (that one up there has a 6 7/16 " radius to give pretty much a 7" radius arc on centre). I should mention that the track is held in place with transfer tape and pins inserted in the factory drilled tie holes. 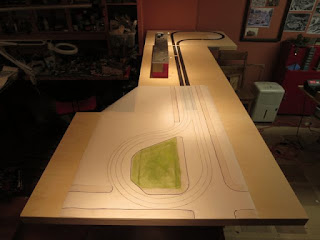 I rotated the layout 180 degrees so the Neville Loop is on the free end for easy track installation. It shouldn't take too long to get its track installed, and then it will be on to soldering :-)
Posted by J D Lowe at 7:28 PM No comments:

Flashback at the magazine rack 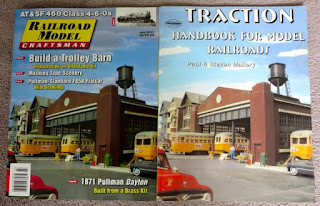 I dropped by the hobby store yesterday to buy some track to finish the new street car layout. Over at the magazine rack I experienced some deja vu. That's the July issue of RMC on the left, and Carsten's old Traction Handbook on the right. It's rare to see anything, anywhere about street car modelling, so I bought it. The trolley barn article covered how to build it of course and also had some discussion on trolley track. Hopefully we'll see more street car oriented articles in the future.
Posted by J D Lowe at 7:45 AM No comments:

By boxcar to the Painted Land

Painted Land: In Search of the Group of Seven (trailer) from WhitePinePictures on Vimeo.

Later last night I watched Painted Land: In Search of the Group of Seven on TVO. As well as the beauty of northern Ontario, and the fascinating story of tracking down the painting sites of the Group of Seven, two other things caught my attention: the railway, the Algoma Central, was key to providing them access to the Ontario north country, and the landscapes and adventure reminded me of E. L. Moore's EVRR (look closely at the lakes, cabins, life in a boxcar with a group of friends - shades of Spumoni Club Coach - and access only by train). The movie is available at TVO's website. 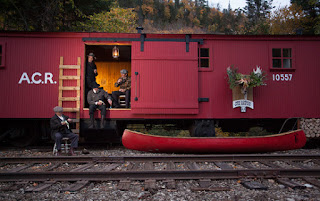 A recreation of the boxcar - used in the Painted Land - the Group of Seven lived in during an extended painting expedition in Northern Ontario. Image sourced from the Painted Land website.
Posted by J D Lowe at 6:39 AM No comments: 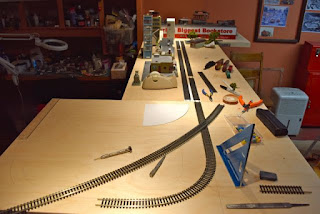 I'm starting to think avoidance of soldering is a recognized medical condition. Instead of soldering some leads on the EVRR blocks, I decided to install some track on the new street car layout. I started with the easiest part, the two strips along the main drag, and then went on to the loop around the housing block on the west end. I think once all the track is installed on this thing - and there isn't much - I'll pick up the soldering iron and hold a solder-palooza on both layouts. Hopefully Debra won't have to call an ambulance :-) 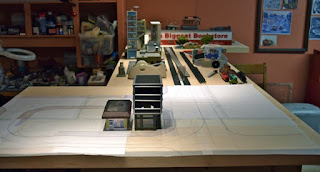 Was The Novelty Factory based on St. Luke's Church?

Paul Zimmerman contacted me to tell me about a wedding at St. Luke's Church, in Smithfield, Virginia, where he was the organist. He noted that the church bears a striking resemblance to E. L. Moore's Novelty Factory that appeared in the July 1970 issue of Railroad Model Craftsman. That model on the left is a plaster replica of St. Luke's sold in the church's gift store. It measures a little under N-scale. 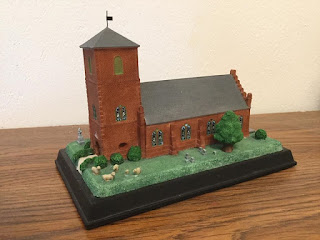 The similarities are striking. Mr. Moore did have some family connections in Virginia, and he was well read, so maybe the basic shape of the church influenced his model. I can't say for sure, but it's interesting to ponder.

I read through E. L. Moore manuscript for the project and found this introductory passage that was deleted from the published story (if you're following along at home, it was meant to appear after the second paragraph in the article).

Have you ever been eaten with envy at the sight of some far out gimmick some other fellow flashes at a party, and which gets the center of attention? It's probably a drip from the fertile brain of Uncle Wilbur. Like, maybe: See-thru Keyholes with adjustable eye rests and a broad field of vision. Flea collars for cats are commonplace enough, but not until you've seen Uncle Wilbur's cat collar for fleas have you see the latest. Just slip one on your favorite flea and a cat will shun it as it would Saturday night's sin.

Then there's a finely detailed Crematory with a smoke stack, a perfect mantel ornament. Say you decide to stop smoking so you insert your last lighted cigaret, then present the thing to your loved one. In a space on one side is inscribed some of Uncle Wilbur's posey:

FINE ASHES SINCE 1899
Here lies my final ashes, darling,
But I pray thee not to weep,
Tomorrow there'll be, I'm sure
Your ashes for you to sweep.

It's a bit of a repetition of the theme in the second paragraph, and a bit on the weird side for a mainstream publication, so I can see why it was edited out. But, there it is for completeness :-)
Posted by J D Lowe at 7:53 AM 2 comments: 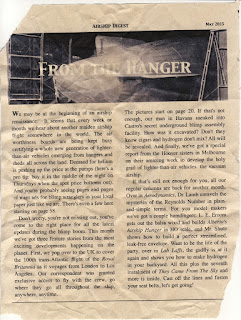 Vince and I took his time machine out for a spin. He just got an alternative universe module installed and was keen to show it off. It worked great! When we got back I found this page stuffed between the seat cushions.
Posted by J D Lowe at 6:25 AM 4 comments: