This blog is set up to post some pictures and notes about an HO scale model railroad I started to build in November 2008. Over the years I've collected a number of items in anticipcation of starting a new layout, and back in November things seemed to come together to make me think I should get started now. It's also a pleasant diversion from stewing about the economy. As for this blog, I'm going to try and do a post a month on the state of construction and related projects.

I built the table during the summer of 2002. In essence it's a 6 foot long by 5 foot wide plywood surfaced, pine-framed, platform mounted on a cart that allows the platform to be rotated up so the entire train table can be stored up against a wall to free-up floor space when not in use. 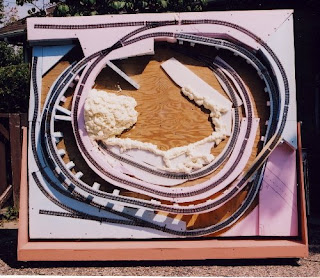 The table top is made from 1x4 pine and surfaced with 1/8" plywood pieces. The plywood and some of the pine had been left behind in the house by the previous owners. All I had to do was buy a few more pine pieces to complete the platform. But, if I did this again I'd probably use a single piece of MDF for the top and a pine frame. Over the years the platform has warped a bit due to seasonal humidity changes in the basement. 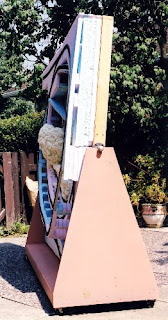 The cart is made from left-over pine and particle board for the base, and MDF for the sides. The whole thing mounted on heavy-duty casters so it can be wheeled around. The casters have locks so that once it's in position, the wheels can be locked to prevent it from rolling. One problem is that the basement floor is uneven, so when the table is in place, the wheels need to be shimmed so that the table top is more-or-less level. Since hind-sight is 20/20, on a future version I'd make sure the casters have a built in leveling capability. 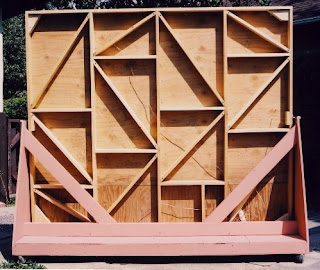 The mounting hardware for the table-top is pretty simple. Unfortunately I can't remember what this hardware is called. All I recall is when I was wandering through the hardware store when I was building this thing that once I saw it, I new it would work. Again, with 20/20 hindsight, on a new table I'd make sure the rotation hardware didn't stick-out as much as it makes storage a little difficult, and its easy to punch a hole in drywall if you aren't careful.

The table-top is held in the horizontal position by a removable diagonal brace. 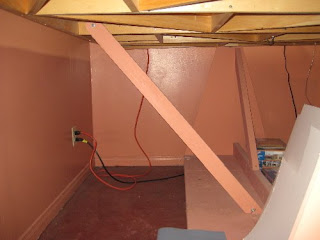 It's pretty sturdy when it's in use - as long as you don't lean on it too hard. If I was to build another I'd add thin stabilizing legs to the corners so that if you wanted to display it at a train show, the legs would assure that all those passersby didn't accidentally tip the thing over. 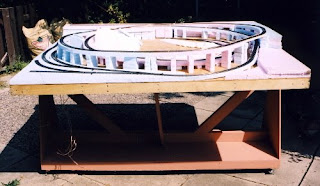 Once the table was finished, I started to work on laying the track and building up the terrain. At the time, I was interested in building a multi-level layout with a long, continuous loop of track. The track plan shown below (from 101Track Plans for Model Railroaders, by Linn H. Westcott, published by Kalmbach Books, 1956, page 11) fit the bill and I set about building a version. 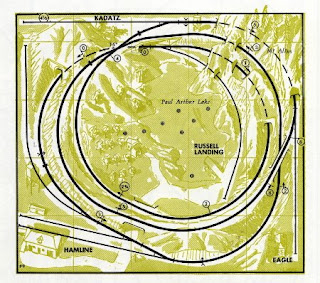 The roadbed, supports and terrain bases were made from insulating foam with liberal amounts of glue and screws applied to hold it all together.

It ran pretty well, but after the fun of initially building it wore off, its lack of operating possibilities became clear and I used it less and less. Also, I realized that one of the things I enjoyed about model railroading were the opportunites it afforded for trying different types of model building projects, but this layout - with its orientation towards mountain-like scenery - didn't provide them for me.

Last year, on a weekend in November, I tore down the old trackplan and leveled the terrain back to the original plywood base. I thought it would be a little traumatic destroying all the work of years previous, but it turned out to be rather pleasing - probably something to do with the anticipation of starting anew. 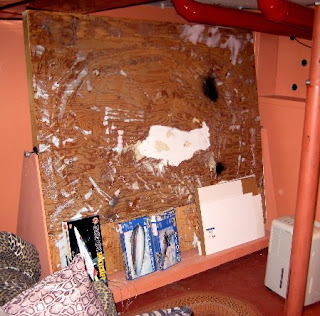 I had decided early-on that I wanted a version of John Allen's classic TimeSaver to be the core trackplan. This meant that the railroad could be used as a train-oriented game - and a good one that has many interesting variations. I also wanted it to be 'Ontario-oriented'. That is, maybe not an exact replica of some specific place in Ontario, but something that reflected Ontario to me. And, it had to provide lots of opportunites for trying out different kinds of model building projects - especially buildings, structures and humourous scenes - which to me meant a layout that was basically flat. Strictly speaking this isn't a model railroad at all since it doesn't model a railroad, it just uses its attributes for use in building a game and a model display space. 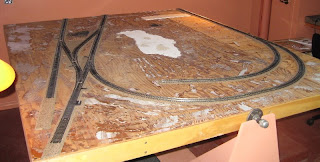 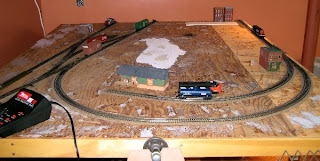 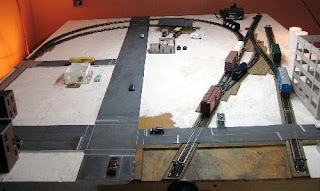 It looks a little barren right now in comparison to the earlier railroad, but that should change as things develop. I don't have a construction schedule that I'm following and development will no doubt appear haphazard.