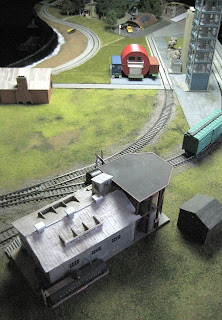 I was talking with a friend about his new trackplan for a large basement-sized layout he’s planning on building. So far it’s shaping up to be quite impressive. It got me thinking about the trackplan for the Lost Ocean Line, and after going back through the blog a bit, I realized it has been a little over a year since I started laying out trackplan ideas on the back deck. I had planned to start work on construction around the end of July, but nothing got going until September. However, by Christmas ’11 trains were running and some basic scenery and buildings were in place. 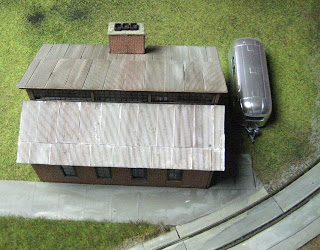 My current plan – if one can call it that – is to finish off the ground work in the urban area, and the remaining wiring for a couple of switch machines and DC power, by Labour Day. At that point, the basic infrastructure will be in place, and then the plan is to concentrate on detailing the scenes and getting the rolling stock to run smoothly for a Silver Spike ceremony during the Christmas holidays. No doubt there’s lots of waffling and mind changing ahead  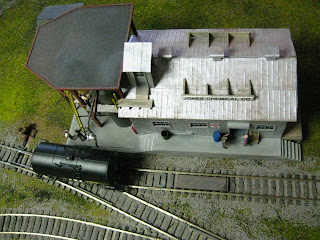 I got a bit of a jump on the scene detailing work once I finished adding turf to the rural area: I added my building collection back in. After several re-arrangements and long staring sessions I finally realized the obvious: there were too many buildings! It was just as dense as the urban area. To get a proper contrast between the urban and rural venues I needed to drastically limit the number of rural buildings and activities. So, I installed a display shelf in the study, moved several buildings there, and things started to look a bit saner. The good news is that the rural area still meets my requirement of allowing me to move things around to create different scenes, just that a ‘back stage’ storage area is also needed!

Now that the summer is in full swing model railroading and model building are slowing down. However, I recently came across these charming videos of TTC subway construction. The first is a modern montage, and the second is some vintage footage via the CBC. The second one even has a brief appearance of some publicity models of a couple of subway stations, but I should also note that the audio quality on it isn't that good. 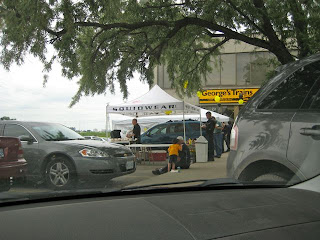 Saturday was George's Trains 50th anniversary celebration. It was a great event and I'm sure it was probably quite profitable too given that it was wall-to-wall people in the store when I was there. Ok, look, I'm not a shill for the place, I think I come by my admiration honestly. Back in the '60s and '70s my father worked at the Gulf Oil data centre on Mount Pleasant Road in Toronto. For a number of weeks back in the late '60s he was noticing that a number of his staff were taking their breaks across the street, at some place called "George's Trains". He wasn't a train person, but he certainly took notice, and that started my long acquaintance with George's. 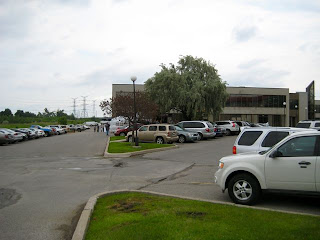 [The parking lot was completely full]

In the '70s I'd go down there, but it was long ride on the bus and subway from the suburbs so I didn't go often - it was an event when I did. Back then my means were meagre, so there was more worshiping and coveting than actual buying. As life went on, there were very long stretches - decades at times ! - were I didn't visit them at all, but when I was back I'd try and make a nostalgic visit.

That all changed a few years ago when I got back into model building and model railroading. Things had changed for them as well. Property values and rents had shot up in the Mount Pleasant area, and they moved out to a unit in the northeastern suburbs. And coincidentally, just a few blocks from my father's house. As William Shatner would say, is that weird or what? This all added up to make me a regular. When their 50th anniversary event was announced, I knew I couldn't miss it.

After checking out the store to see what bargains were to be had, I walked a few units down to the Railview Model Railroad Associates open house. I'd never seen their layout before, but had heard a lot about it. 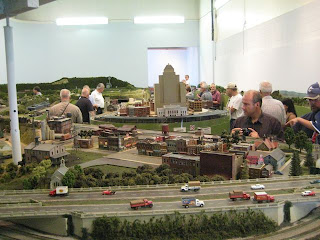 In a nutshell: it's a great layout, and if you're in Toronto when they're having an open house, don't miss it. I'd say it's impossible to do justice to a layout such as theirs with just a few photos and some text, so I'll just present a few images of some things I saw and let it go at that. 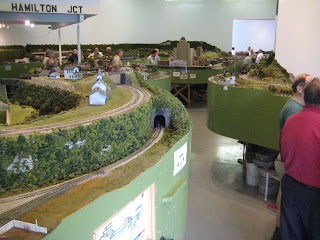 Prototype-wise, the layout simulates railroading in some areas in Toronto and southern Ontario during the 1950's transition era, which allows for the operation of both steam and diesel locomotives. It doesn't replicate areas down to the last detail, but is meant to give an impression of what railroading was like during that era, in that locale. I think it does it rather well. 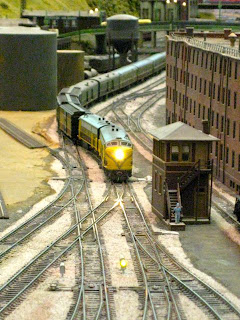 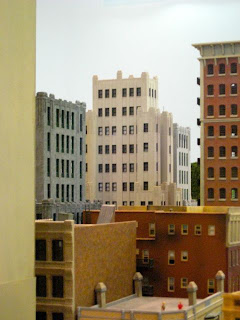 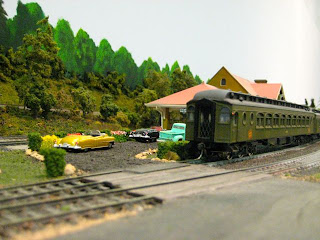 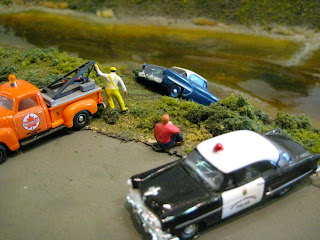 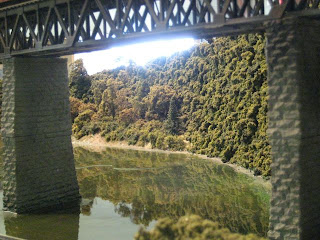 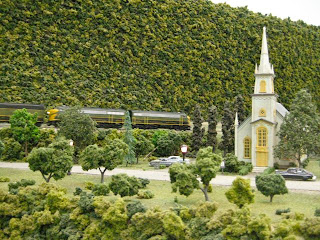 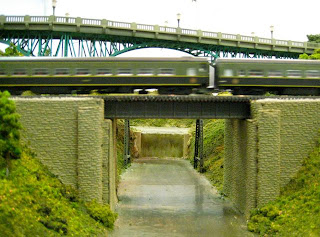 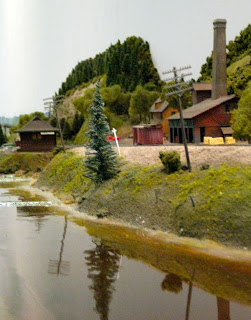 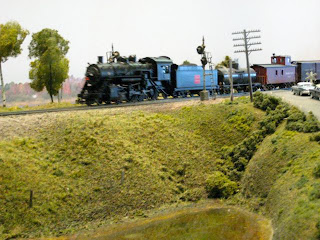 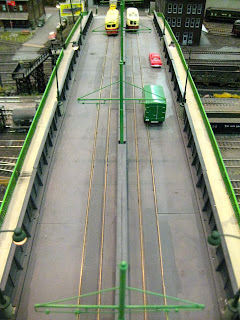 I'm always on the look-out for streetcars, so I was glad to see some here, although they weren't running when I toured the place. Also, this layout has many interesting sight-lines and opportunities for letting long trains run and just sitting back and watching. It's quite relaxing to watch them meander through the Ontario landscape. 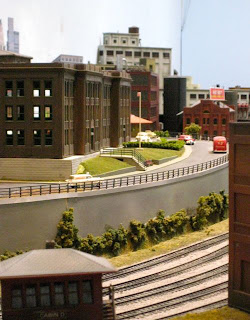 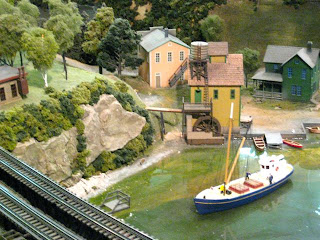 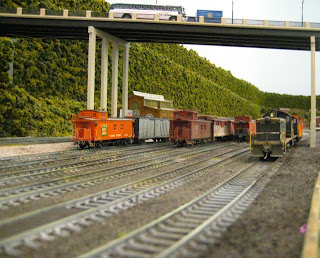 I haven't seen a lot of large layouts, but I thought one of the good things about this one were the high ceilings which enhanced the spacious feeling of the place and that seems like a good thing for a layout that simulates a large area of southern Ontario. Also, I liked the fact that its base is about 4 feet above the floor. That makes it much easier to see things at eye-level and enhances the sense of realism. 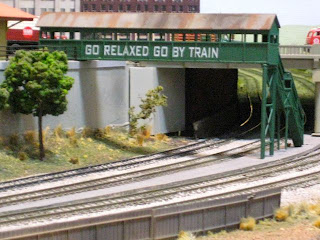 Both fascinating and disturbing. A spiritual cousin to Kim Adams' Bruegel-Bosch Bus?
Posted by J D Lowe at 5:19 AM No comments: