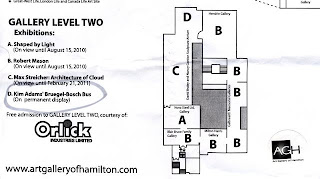 Debra and I dropped by the Art Gallery of Hamilton a week ago to see Kim Adams’ Bruegel-Bosch Bus on our way to Niagara Falls - ok, well, at my insistence I got Debra to agree that we could drop by and she was a good sport and did, and, once there, she thought the diversion was as interesting as I did.

The AGH doesn’t allow photos, so I don’t have any to post, but you can get a sense of the work here at their website. Photos don’t do the work justice - you have to see it to begin to understand it. Turns out they sell three photo postcards of it in the gift-shop, I picked some up. They make nice souvenirs.

The Bruegel-Bosch Bus is a very curious thing to say the least, and I’m not certain the many short and cursory art essays I’ve read online about it really know what to make of it. No doubt they mean something to art insiders who know the language, but I found them a little difficult. No doubt it’s me that needs educating.

But, before I go on, I should say that it’s a great thing to see, and if you’re a model builder interested in even the slightest way of pushing what can be expressed in this media, you need to see this work. And if you do go to see it, don’t be in a rush because there is lots to see and a drive-by viewing won’t be long enough.

The AGH has done a great job displaying the work. It’s placed in its own, huge, second-floor white room with a high ceiling, and a huge, street-facing window that lets in lots of natural light. There’s plenty of space to walk around and view the work from every angle you can think of. The AGH also should be commended for not encircling it with a velvet rope to separate it from viewers. Yes, there is a guard to watch your every move, but that’s a small annoyance and he was very friendly when we had questions.

When it comes to art I never really know what to think. Sometimes I wonder if the artist is pulling my leg to see what he can get paid for. All I know is whether I find what I’m looking to be interesting to me. That’s where I start. I just try to look at things, see if they’re interesting and go from there. Yeah, I do try to read about the things I want to look at, but I don’t think that these write-ups have much sway over me if the thing itself isn’t interesting. It’s the thing, not the back-story that’s important. So, yeah, I see the irony here, I’m writing a back-story, so ignore as necessary, but, as I’ve mentioned, Bruegel-Bosch Bus is worth seeing for yourself.

I don’t know what Mr. Adams was thinking while building this thing. Maybe he started working on it in his back-yard because it seemed like an interesting thing to build and eventually his wife told him to move it somewhere else. And maybe he started to think, man, this thing is gonna be big and expensive; I need to find somebody with some deep pockets to pay for the parts and give it a place to live. Maybe. Maybe one day I’ll find out.

When we first entered the display space Debra immediately told me to abandon all thoughts of building one for myself in our basement. Unfortunately, mind-reading is one of her strong suits. The first thing I did was walk around and identify all the kits and things in the Bruegel-Bosch Bus that I’ve ever built with, or seen in stores or magazines, and marveled at the way Mr. Adams used them. Once that was out of my system I could then look more closely at all the scenes and the overall organization. I suspect I didn’t get a good look at them all, because there is a lot to see.

An old VW bus / flatbed is the core of the piece - it looks a lot like the E.L. Moore bus, but far more decrepit. On the flatbed is a vast heavy industrial area modeled (all in HO scale kits and components) to be in the same state of decrepitude as the bus (interesting, given that this piece is located in Hamilton: Ontario’s steel town). As you move out towards the sides and back of the bus, the scenes and structures become more urban, but the overall broken down, post-apocalyptic feel to things remains - there’s volcanoes spewing psychedelic magma, piles of vehicles strewn here and there, giant apes and monsters scaling skyscrapers, trains that go nowhere, and all kinds of other wild craziness going on. However, as you move forward towards the cab, the HO-scale scenes die out and things shift to vignettes built around pop culture figures in various scales - nothing cute here, almost a black-humoured glimpse into the bowels of some sort of late 20th century media hell. The centerpiece is a full-size replica of a skeleton in the driver’s seat piloting the whole damned bus to God knows where, but it probably isn’t good. What’s the message; beats me, maybe it’s simply a bleak, space-time-warped mash-up of The Outer Limits meets Mr. Rogers’ Neighborhood and Laugh-In in the Twilight Zone.

But, it’s all in good fun. Although, Debra was right, I wouldn’t want to live with it in our house, just visit it when the mood strikes.

The sign on the display space wall says that Mr. Adams does indeed visit his creation from time-to-time, and while there continues adding to it. It’s a work in progress. The gallery needs some photos, or maybe an ancillary video installation to show how it has evolved over time. And maybe explain how they got it into the gallery in the first place. No one there could explain that. Putting some information up about some of the more prosaic and less arty aspects on how this piece came about and was built would be interesting too. 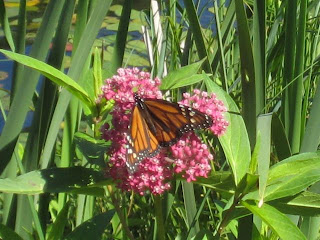 There seems to be lots more Monarch butterflies around this summer than I've seen in a long time.
Posted by J D Lowe at 7:01 PM No comments: