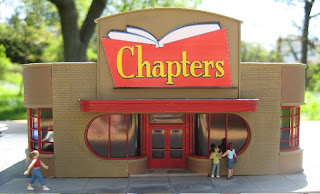 Once I got the new printer in operation I finished the sign. As I mentioned in a previous post, it’s simply a photo of an actual store sign, reduced and enhanced a bit to fit to the sign-board. It’s printed on glossy photo paper. When the ink was dry I cut the sign out with a sharp knife and glued it to a 0.020 inch styrene backing sheet with white glue. When that assembly was dry, the excess plastic was trimmed away with a knife and scissors to arrive at the final shape. Some thin plastic strips were glued to the back so the sign would standoff from the signboard. The edges of the sign were carefully painted with flat black, and the back was painted with flat aluminum. A black plastic strip was attached to the bottom of the sign to finish it off. It looks pretty good when glued to the signboard if I do say so myself. 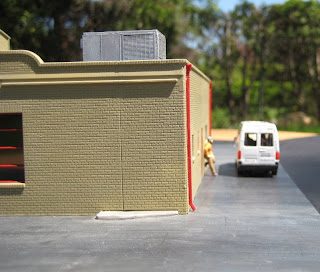 Well, after I sat back and looked at the model for awhile I added a roof vent from the Walther’s roof details accessory pack the air conditioner came from. I also over-painted the roof again with a loosely mixed thin wash of PolyScale dust and flat black and thinner. If I were to do this again, I’d surface the main roof with a sheet of fine sandpaper as I did the roof overhanging the sidewalk. It would give it a more interesting texture, and better distinguish it from the parking lot when viewed from above.

I spent a bit of time arranging figures and cars to help bring the scene to life. All of the figures are from Woodland Scenics except for the cyclists which are from Preiser. 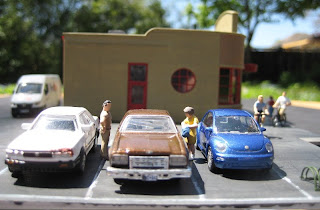 That husband and wife standing by the ’79 Impala while the wife rummages though a giant purse looking for her car keys started life as two figures from the Woodland Scenics ‘Window Shoppers’ HO-scale figures set. After studying the figures for awhile I flashed on what would be the ‘searching-for-keys-in-a-giant-purse-by-an-old-car-in-a-parking-lot’ scene. I flashed on the overheard ‘Oscar and Emma’ style dialogue too.

Husband: Hurry up! I’ll miss Green Acres.
Wife: They’re in here somewhere.
Husband: Hmmmmm.
Wife: You’ve seen every episode a hundred times.
Husband: Maybe there’ll be something new.
Wife: Don’t worry. If I can’t find them I’ll use OnStar
Husband: This is a ’79 Impala. OnStar hasn’t been invented yet.
, and so on......
Debra was a little cool to the dialogue, but agreed to its essential truthiness. But, at a later unveiling with Sylvie and Poon, Poon reminded me that in the apparent timeframe of this HO world, strictly speaking, Chapters isn’t invented yet either, so it’s all kinda moot. 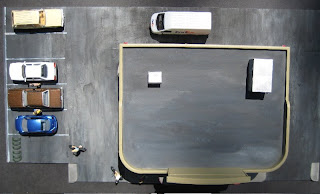 I need to do some weathering and detailing work on the cars. Most don’t have license plates, some are too clean, others don’t have side-view mirrors, and so on. 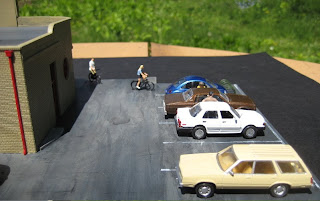 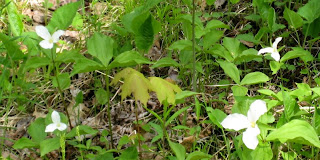 Both the bugs and the trilliums are out in force this weekend. 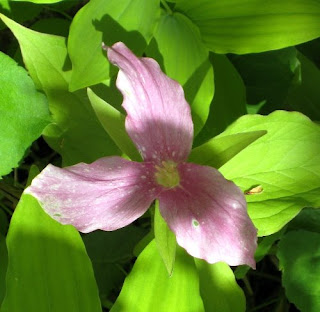 With the shortened side walls, the base and the roof also need to be shortened in order to pull this building together. 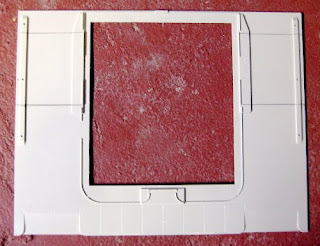 Here's the base with the cuts marked. Shortening is a straightforward task. I used a razor saw to cut out the excess sections. Sand the cut edges to clean them up a bit and glue the remaining pieces back together. 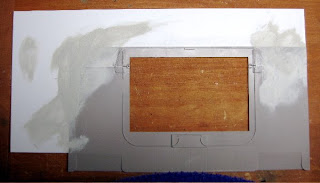 I used some 0.060 and 0.020 inch styrene sheets to extend the base to create a parking lot on the left, and a lane way for deliveries at the back. Once the glue had completely dried from the shortening and parking lot extensions work, I filled in the joints and gaps on the surface with Squadron white putty. You'll notice that there is also some curbing around the edge of the kit's base that needs to ground off. When the putty was completely dry, I used a Dremel with a sanding drum, along with some sanding sticks, to smooth things out. I deliberately didn't make it completely smooth because parking lots and driveways rarely are perfectly flat in Ontario. 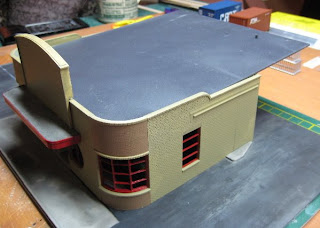 Shortening the roof was much simpler: just measure and cut off the excess from the back. A little sanding to clean up the cut, and viola: a perfectly fitting roof. 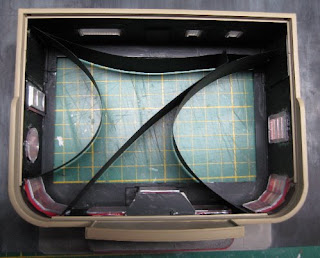 Both the parking lot and the roof were painted with a loosely brush painted with a mixture of Tamyia Light Grey, Model Master Acryl Aircraft Interior Black and Acryl thinner. It took about three coats to cover the parking lot. The lines marking the parking spots were drawn in with a white Tamyia paint pen. Some cracks in the driveway were added with a fine Sharpie pen. A fixing wash of thin flat black was flowed over the driveway once these markings were added to tone things down a bit. 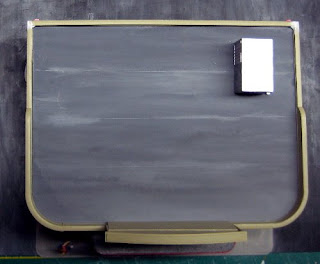 The rooftop air conditioning unit is from the Walther's roof accessories package and isn't part of the kit. It's painted with Tamyia Flat Aluminum and toned down with a wash of thinned flat black.
Posted by J D Lowe at 7:38 AM No comments: 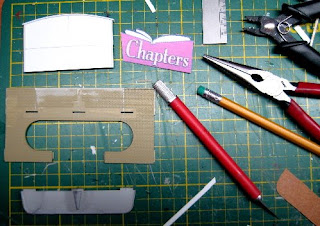 Probably the most distinctive feature of this building is its sign and the corresponding signboard.

I took a photo of a Chapters sign from the parking lot of a local outlet. Surprisingly, this produces a fairly distortion free image even though I was standing many metres away and below the sign – no doubt this is recorded on some security camera somewhere. I printed a draft sign with my inkjet printer; scaled to a size that I thought would look right on the front of the building.

I used the paper sign as a guide for building a styrene signboard. This is a freelance component, and doesn’t replicate any particular big-box store signboard, but is very similar to those seen everyday at every big-box mall. It’s built primarily from 0.020 inch sheet styrene with some square stock used for reinforcement. 0.012 inch sheet is used for some of the finer trim pieces. The thickness of the signboard was sized so the completed structure would fit snug on the wall above the front doors with just minimal overhang. 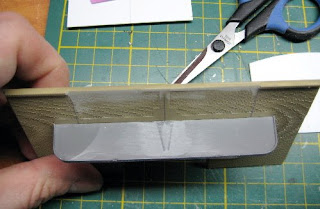 The molded brickwork on the upper edge of the façade where the sign will attach needs to be ground off in order for the signboard to seat properly against the wall. This is easily done with a sharp x-acto knife and a sanding stick. As well, the roof that overhangs the sidewalk has a molding for attaching the bus depot sign from the kit that needs to be ground off. The upper surface of the overhang roof was papered with a fine sandpaper to give it a ‘roof-like’ texture. 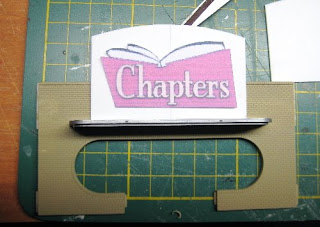 P.S. I solved my printer problem over the weekend – unfortunately it was by purchasing a new printer. My 10-year old Epson refused to print yellow, and the red and blue weren’t very clear either. No amount of fiddling, or cleaning, or even replacing the printer cartridges, would do the trick. I printed up a sign with the new Lexmark and then went on to more-or-less complete this project. Hopefully, I can take some pictures of the finished model once the sun shines and post the conclusion.
Posted by J D Lowe at 7:47 AM No comments: 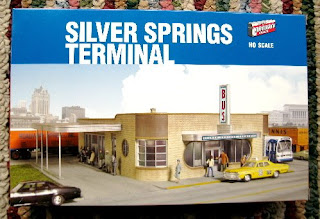 When I saw Walthers’ Silver Springs Bus Terminal kit on the shelf at my local hobby store I new I had to have it. Didn’t know what I was going to do with it. Didn’t need a bus terminal, but I liked the art deco styling. This happens a lot with me. I see a kit in a store, I realize it has my name on it, I buy it, it sits on my shelves for awhile, and eventually, after looking at it long enough, I understand what it could become. This one is becoming a Chapters bookstore.

Chapters is the dominate bookstore chain in Ontario. All their outlets appear to be big box stores in big box malls. I’m a serious reader and book lover, so I spend a great deal of time – and money – in these stores. It seems only natural that one resides in a place of honour on my layout.

Although there is variation from one Chapters outlet to another, they have common styling cues – which I figured if I captured them in the model it would signal to the viewer that this is a Chapters store even though I’ve never seen a Chapters as small - or in an art deco style - as the full-scale equivalent of this HO scale model. 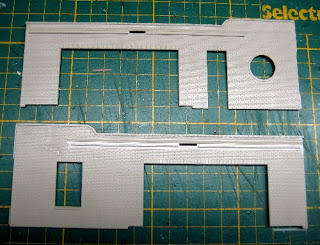 The changes I’ve made to this kit are relatively minor. The biggest one was to reduce the depth of the structure so that it would take up less space on the layout. There are large openings on each side wall for installation of doors and windows that lead to passenger loading areas. I decided to eliminate these since an actual Chapters store is unlikely to have such a feature. 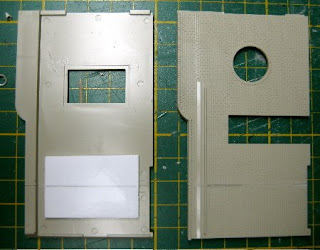 It’s a simple matter of using a razor saw to cut out the wall molding above the opening from the side walls and glue the remaining pieces back together. A little sanding and filing of the remaining pieces helps to achieve a clean, solid joint. A thick styrene plate was glued to the inside of each joint to reinforce the – now shorter – sidewalls.

P.S. Originally I was going to do one long post about the construction of this building, but I realized I was falling into the same pattern as for the Bunn’s Feed & Seed Plant. I want to get in the groove of posting notes about ongoing projects, instead of lengthy ‘article-like’ postings. Old habits die hard - I’m a bit stalled on this project, but the Art Deco Chapters is actually almost done – I’m just in the process of fixing up my printer so I can print the art for the main sign and get on with the final phases of construction.