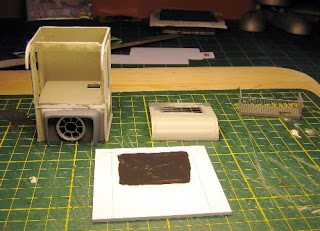 I'm off on a bit of a tangent these days. I've got a few ideas for somewhat odd buildings made from leftover model kit parts and I thought I'd work on them for a while. This one is a tower to provide an overlook for curious train viewers. The top photo shows where I'm at in the construction, and the bottom photo shows the initial collection of parts. Once I'm finished building I'll list all the parts sources and highlights of the project. 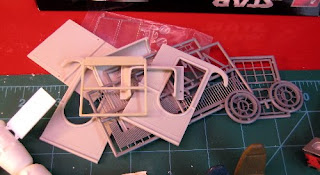 I liked the idea for this retro-futuristic-1970s bungalow as soon as the thought crossed my mind and I was anxious to get started building it. At first I figured I’d try and construct it as a single day building project – probably one very long day at that. But I soon gave up on the idea because finding a day in which I could work on it uninterrupted was proving impossible. So, I started it one Sunday afternoon while waiting for a subassembly on the Jones Chemical Co. to dry, and continued on it whenever I could find a few minutes. It’s relatively simple, and was a welcome counterpoint to the longer and more involved Jones project. And it made good use of my Gremlin!

The basic building block is the camper-top from AMT / Ertl’s 1/24 scale Deora kit, which was a leftover from the Martian Deora project I did a few years back. I also used a set of doors and overhang trim from the Walthers Silver Springs Bus Terminal that was leftover from the Art Deco Chapters project. 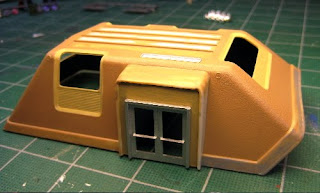 There were only two modifications performed to convert the camper-top into an HO-scale bungalow.

1) After cleaning up the flash and sprue-ends on the camper-top, I glued a sheet of 0.020 inch styrene to the front to form the wall abutting the parking spots. Once the glue was thoroughly dry, I sanded its edges to mate cleanly with those of the camper-top.

2) Then, the camper-top’s door faring was cut down and glued into the main body of the camper-top. The 1/24 scale door molding was ground-out with a Dremel tool in preparation for installing the HO-scale doors. A sheet plastic insert was shaped for the opening in order to provide a place to mount the doors. 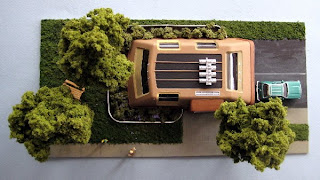 After these rather basic modifications, all that was left was painting and installation of the windows. Ok, well, I did add a mechanical looking thingie to the roof just to add to the futuristic look. This was the air-compressor from the low-rider kit used to build the El Camino Estrella project. It was chromed and I let it soak in SuperClean to strip the fake chrome plating before painting. 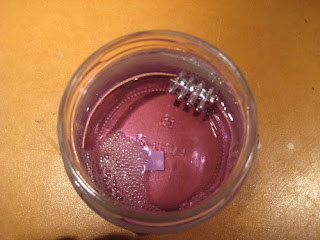 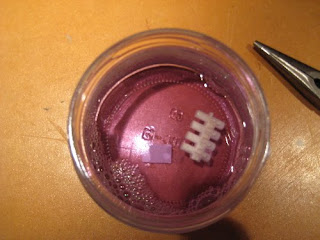 [After about 10 minutes the chrome is dissolved away]

Striping chrome from plastic pieces was on of those ‘advanced’ processes that I marveled at as a kid, so when I took up model building again I had to give it a try. Lots of articles in the model building press recommended using a product called SuperClean. The idea was simple: drop the piece to be striped into some SuperClean, let it soak a bit, and then, volia !, a chrome-free piece of plastic ready for painting. Ok, but how long for soaking, and could the piece be damaged if left for too long? What I’ve found from striping chrome from pieces in many different kits is that it doesn’t appear possible to damage styrene parts if they are left for days in the solution. Also, the time it takes for the solution to work seems to vary: from a few minutes using clean solution straight from the bottle, to 10s of minutes for some parts or if soaking in solution that has been used a few times. It’s labeled as corrosive on your hands – but it doesn’t appear to instantly create holes in your skin if you accidently splash some on yourself so no need to panic, but rinse off splashes as soon as they happen and follow the safety instructions. Once the piece has been striped, wash it with soap and water to remove residue. 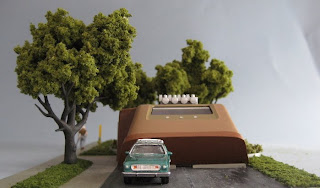 One of the more interesting aspects of this project for me was creating the mini-diorama. It gave me the chance to practice using some scenery techniques before I applied them to the train board. Basically, I used the method for bonding flocking to a base described in How to Build Realistic Model Railroad Scenery, 2nd Edition, by Dave Fray, starting on page 43. One thing I should note is that you should not use one of those ‘natural’ dish soaps to create ‘wet’ water discussed on page 39, that is, as the agent that is added to breakdown the surface tension of the water. I think the chemical ingredient that is added to dish soap for this purpose is missing since wetting agents I made using natural dish soaps still allowed water to ‘clump-up’ instead of dispersing. Use a thin, old-school, non-natural dish soap – I don’t think natural dish soaps were around when Mr. Fray’s book was written.

The trees are from Woodland Scenics. I’d rate them as ok trees, but not good or great ones. The trunks have numerous and glaring seams and circular indentations left-over from the molding process that had to be sanded and filed. Once that was done the trunks were painted with a mixture of medium gray, dirt and flat black coloured paint. Holes were drilled into the diorama base so the trees could be securely mounted. 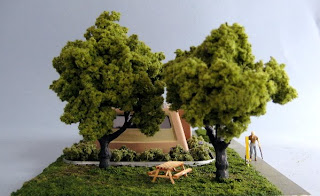 The fire hydrant is from a Walthers city detail set. I added a scratchbuilt side-mounted snow depth flag and painted it to resemble local hydrants.

The trees and outside details make the thing pop for me. But, I could easily see the Deloralow in a south-west, desert setting just as well. Maybe paint it in a terracotta scheme with some nearby cacti.

This project was inspired in some way by the S/R/Sv2 project from last year. Not in an explicit way, but more from the aspect of thinking about my pile of left-over plastic kit-parts in a different way. I got the idea simply by rummaging through my box of kit remainders, handling the various parts, and looking at them from different angles. I was also thinking about if it was possible to make something interesting from this stuff with a minimum of construction – just concentrating on the shapes as they were without recourse to major kitbashing. I have to admit this was a fun project, and I’ve got some ideas for more. Long live the retro-future! 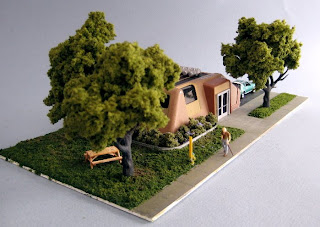 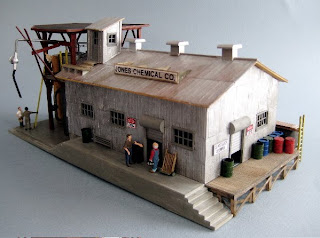 Ok. I lied a bit in yesterday's post: I did take a few photos during the final construction phase. As I was in the homestretch with this one, there seemed to be stumbling-blocks with every little addition, so finishing up seemed like a trial at times - I was glad when it was done. 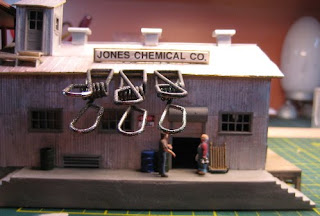 Some the roof top simulated metal panels came unbonded and had to be reglued. I poked a little white glue under the raised parts along the eves and held them in place with some clamps. 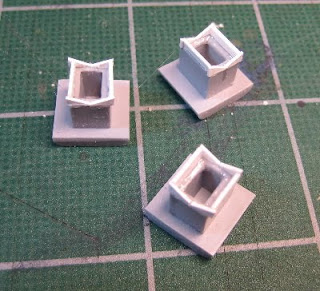 These are the roof vents. Instead of carving ones from balsa as Mr. Moore specifies in his article, I used some Walthers plastic vents that I extended with styrene to fit the roof. This picture shows them prior to final shaping and painting. 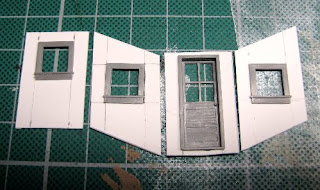 Here's the roof-top shanty. A few months ago I bought one of Tichy Trains Group window and door assortment boxes. That's where I got a set of windows and doors to fit this small structure. I put windows on three sides assuming that whoever was in there would want a view in all directions.

This is the inter-tank walkway structure. Bascially, I added styrene angles to represent steel supports.

I finished the Jones Chemical Company last week after working on it on-and-off throughout December. Unfortunately I didn't take photos during construction, but just concentrated on finishing. I'll let the photos of the completed building do the explaining. 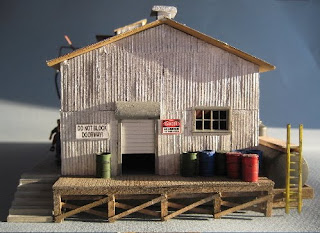 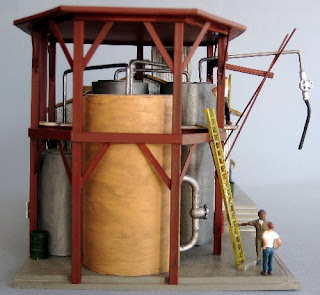 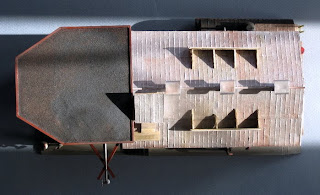 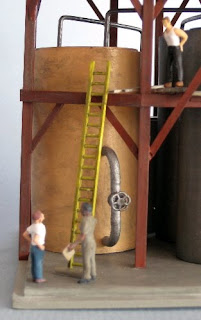