Some interesting TTC streetcar and trolley bus footage, and the video below, an ad by Eastern Airlines, touting the wonders of Toronto - opening with some aerial footage featuring the TD Bank Tower.
Posted by J D Lowe at 3:15 PM No comments: 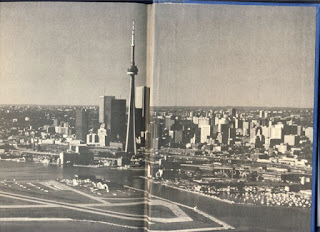 I was going through my father's books and came across one called Toronto by Bruce West. It is the 1979 second edition to the original published in 1967. It had this to say about the TD Bank Tower.

But, bewildering as it became to many of its residents, Toronto was to continue sprouting outward, upward and even downward in many spectacular and rapid ways during the next ten years. Especially upward. For one thing, the dizzying height of 740 feet achieved by the main tower of the Toronto-Dominion Centre on King Street, which had made it the loftiest building in all of Canada, would soon be surpassed by that of the white and gleaming spire of the Commerce Court building, whose height of 784 feet would in turn soon be eclipsed by the 935 feet of nearby First Canadian Place.

In HO scale, First Canadian Place would stand about 10.75 feet tall, and although much taller than the TD Bank tower, it and Commerce Court never seemed to me to have the raw visual power that the black slab does. 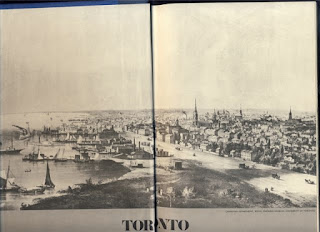 [Photo inside the front cover of Toronto. Scrunched in the fold the caption says, 'Toronto 1854']
Posted by J D Lowe at 6:33 AM No comments: 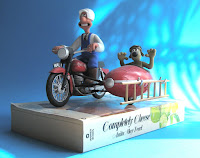 I was looking through the blog's stats this week. It turns out that since 1 January 2017, the #1 post is: Index to the E. L. Moore models posts. Well, all the ELM posts generally are all in the top 100 and beyond and mostly beat out everything else that's been posted here. The first non-ELM post in the popular category is the one in 21st position hits-wise: The omni-circulatory streetcar layout. I found that rather surprising. The next non-ELM post is at the 24th position hits-wise: The Anti-Pesto van is ready for action!. Ok, I'm happy about that one. What is there not to like about Wallace and Gromit. And finally, the 3rd most hit non-ELM post since New Years Day 2017, the relatively boring: A review of some Boswer, Con-Cor, and Bachmann HO-scale streetcars. What does this all mean beyond ELM's popularity? Not sure really.
Posted by J D Lowe at 7:15 PM 10 comments:

Taking a peek into LabLitArch

While wandering around the internet looking for anything on mockups I stumbled across the Laboratory of Literary Architecture today. Here’s what their website says they’re all about,

The Laboratory of Literary Architecture is a cross-disciplinary exploration of narrative and space. It is for anyone interested in literature — from high school through graduate school and beyond — and, in particular, for writing, literature, and architecture students and professionals, as it explores how pure, spatial, wordless thought is an essential aspect of both literary and architectural structures.

A Cross-Disciplinary Exploration Of Literature As Architecture


The Joy Of Cardboard, Glue And Storytelling

To me it looks like one of the things they do is explore using mockups to express stories and stories to express mockups. Stories and buildings / Buildings and stories: I hear an E. L. Moore resonance with a Mister X overtone in there somewhere.
Posted by J D Lowe at 9:45 AM No comments: 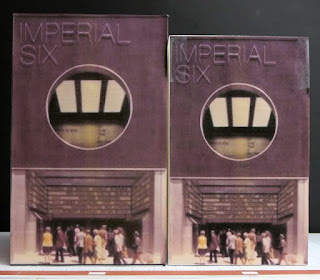 I made a second, and slightly smaller, Imperial Six mockup. On the first one, the people appearing in the plane of the facade looked a little too large, so on the second I tried to get those figures reduced closer to HO size. 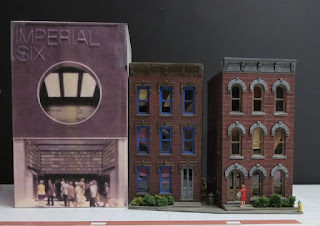 The second mockup isn't a lot smaller, but I think it'll fit in a bit better with its surroundings.
Posted by J D Lowe at 8:17 AM No comments: 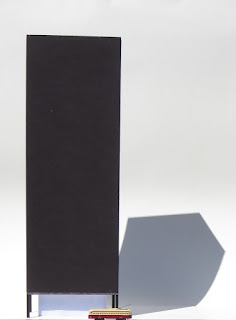 No, I didn't build a second TD Bank Tower mockup in N-scale, just re-photographed it with a Bachmann N-scale PCC nearby (a reader mentioned that this PCC is closer to 1/150 than 1/160, so calibrate your eyes accordingly).

I haven't tried mockups before, but playing with them is rather fun, and it's good to see the possibilities without having to commit to a complete model.
Posted by J D Lowe at 3:00 PM No comments:

Catching the Vibe in Voie Libre 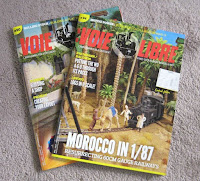 Stories about outhouse construction (shades of ELM's outhouses), building miniature affordable carriages (shades of ELM's Slim Gauge Carriage), scratch-built flatcars (shades of Easy-To-Build Model Railroad Freight Cars), kitbashing a gasoline driven railcar (shades of ELM's Rolliam aka Spumoni Club Coach), and on and on. What was going on over there in France? Was an ELM cult alive-and-well across the Atlantic? Here was a magazine with a vibe I feel only in those '60s and '70s MRs and RMCs, but with up-to-date methods and technology and photography (not to mention a plan sheet of excellent drawings for the covered projects stapled in the middle - a nice and practical touch) all presented in an attractive package. Who knows? All I can say is that Voie Libre seems like an excellent quarterly magazine, and after reading two issues I bought a subscription. Well, I bought a subscription to Voie Libre International, the English language edition.

I stumbled across it during my summer internet travels. Voie Libre means Free Way. Excellent title. And it's sub-title is 'Campaigning for a Different Kind of Railway Modelling'. Excellent sub-title. Based on the title and sub-title alone I couldn't resist buying a couple of issues to see what was up. It seems to be focused on narrow gauge in France, but appears to cover aspects of narrow gauge throughout Europe. Yes, I'm a North American streetcar guy, but I like to think I'll follow the vibe wherever and in whatever form it takes. Vibe Libre? Hopefully time - and my subscription - will tell.
Posted by J D Lowe at 11:49 AM 2 comments:

I have a love-hate relationship with skyscrapers. On the one hand, they're pure expressions of power, but on the other, for some I have a grudging admiration for that expression. The Toronto-Dominion Centre is in that latter category.

That tower shook things up and the city would never be the same again. Look at that photo of Toronto's skyline sometime after the TD Bank Tower was built. There're no other towers there. It's presence dates and stodgifies every other building. It's as if that 2001 monolith plopped straight down into Toronto to move civilization forward from its neolithic beginnings. Transit-wise, the TTC was still running its streetcar fleet with those PCCs that were first designed and built in the 1930s. If the TD Bank Tower was where you worked, one could drop you off at your office. Talk about future shock.

There was nothing stopping that shock-wave from spreading to the sleepy Scarborough suburb where I grew-up. I was in primary school then, and we went on a class trip to ride the tower's elevator to the observation deck to cast our prepubescent, philistinic eyes over the city. We were going to see the future and the TD Bank Tower was the time-machine. Prior to the trip the elevator was a topic of much discussion and how strategic gum chewing would prevent ear-popping as the elevator sped to the top. I don't recall the elevator ride, or if gum chewing was effective, or what the view was like - and never will because the observation deck is closed, and a forest of johnny-come-lately towers now surround the monolith and its brethren. But the trip did leave a lasting impression on my tender psyche.

One problem with the Alta Vista TC layout is that its skyline is too even - it's too uniformly low-rise for my liking - and it's too easy to see from one end to another. I'm thinking a skyscraper or high-rise or two might solve this problem. I'm not going to use just any generic tower because the Alta Vista TC isn't just some 'traction' layout where the buildings are afterthoughts - no, that monolithic icon that's stuck in my mind has to make an appearance.

Easier said than done. In HO, the real McCoy would be well over 8 feet tall - taller than my layout is long ! This is where I had to rummage around in my E. L. Moore inspired bag-of-tricks and pull out the one labelled Selective Compression. Warning to readers, open this one with care :-) 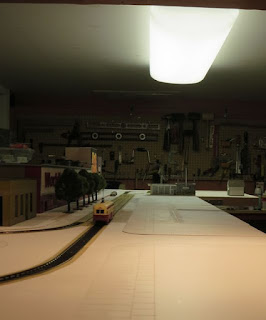 [No tower, looking toward the Neville Park Loop]


Yes, yes, go ahead and laugh, the absurdity of it isn't lost on me, but there is some method to my madness. I want to get the proportions right and later, when a model comes along, the important details. And, this is the really funny part, even though it needs to be small enough to fit on the layout, it still needs to be 'tall'. What I mean is, in relation to the other buildings on the layout it needs to stand-out tallness-wise, but not overly so, so that it doesn't seem wildly out-of-place. In other words, it needs to read as 'tall' in comparison to its neighbours, but doesn't actually need to be 'tall'.

After some fiddling with dimensions and proportions, I settled on a  mockup that measures 24" tall by 8" across by 4" wide. It's made from 3/16" foamboard: black sheets for the tower and white for the lower level. I haven't forgotten my E. L. Moore roots as the support columns at the four corners are balsa strips. 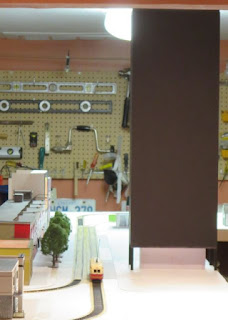 [With tower, looking toward the Neville Park Loop]

Yes, it blocks the view. And it's 'tall' and towers above everything else like it's supposed to. Mission accomplished.

More importantly though, when I placed it on the layout the scene seemed to pop. I had a satisfying feeling that things were heading in the right direction. There's a lot more pleasant playing ahead, but it's starting to feel right.
Posted by J D Lowe at 6:49 PM 6 comments: