E. L. Moore in the 21st Century: One photo summary? 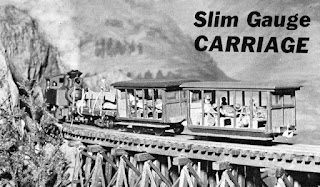 Although I was educated as a linguistic theorist, I like being an art critic better, because anyone who disagrees with me can go look at the thing itself and decide for him or herself about the justice of my argument.
Dave Hickey in Orphans in the Storm, an essay included in Pirates and Farmers.

Throughout this series on E. L. Moore I’ve been quite biased: I’ve focused on works that have exerted some sort of gravitational pull on me. This has been a Jupiter of a photograph. It appeared in the September ’61 issue of Railroad Model Craftsman as the lead photo for Mr. Moore’s article, Slim Gauge Carriage. I first saw the photo last year when I finally got a copy of the magazine, and since then I’ve gone back to it a number times, orbiting with regularity over the months. Objectively, it’s not spectacular, there’s no giant red spot, weird vortices, or psychedelic coloured bands. In fact, it’s rather plain, even a little blurry on the old pulpy paper, and certainly doesn’t equal modern model railroad photos in technical excellence, but it has a few things to say.

First, there’s the obvious message: it shows the finished carriage described in the article.  Well, Mr. Moore could have simply shot some side and end elevations to do that. He didn’t. He staged a scene, and once down this path he jettisoned the purely pragmatic approach and opened things up to his imagination.

The scene strikes me as pure Moore, which is weird because there are no buildings  - the things he is most famous for – in the scene. It’s pure Moore because it’s easygoing, carefree, relaxed, and has a dose of humour. 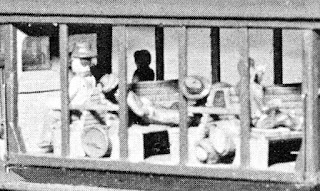 [Detail of the lead carriage.]

Look at those passengers. Lying on the benches. Feet up. Sleeping maybe. Relaxed. 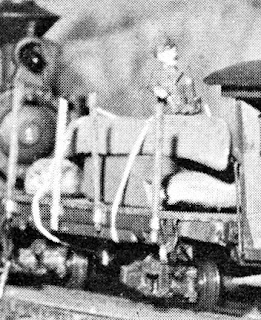 [A load of canoes strapped rather loosely to a flat car.]

Behind the carriages is a flatcar loaded with canoes with an intrepid passenger sitting atop the stack to get a better view of what’s up ahead. Canoes. Cask. Bedrolls. Maybe they’re heading to a fishing hole. It seems like a vacation, not a business trip.

The picture’s a small story. It’s all composition. There’s no fancy lighting, colours or contrasts going on. What there is, is in the content, but it isn’t a, “hey, isn’t this a high fidelity model”,  it’s more of a, “hey, look’it what these guys are doing”. It’s a model of a story. No doubt fictional. Maybe utopian. The model is there doing its job to show what’s being built in the article, but it’s doing that job while doing E. L. Moore’s other job: storytelling. 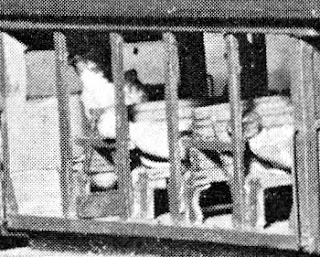 [Looks like everyone is asleep in that middle carriage.]

On the technical side, Mr. Moore has integrated the backdrop into the scene almost seamlessly and has added smoke from the locomotive’s stack. It takes place on a bridge, possibly to add a bit of drama. Lolling around on a small, open-sided carriage, or on top of a shaky stack of canoes, seems a little more dicey when the train is rumbling across a wooden trestle than on nice, flat ground.
Posted by J D Lowe at 8:42 PM