Ok. I figured out how to do embedded YouTube video. This is the full promo for last night's episode of Top Gear on BBC Canada. Even more train goodness.
Posted by J D Lowe at 7:52 PM No comments:


Well, if it's possible to put an El Camino on rails, this Jaguar XJS makes perfect sense - a great segment of Top Gear I saw on BBC Canada last night.

Update 30 Sept: Since I figured out how to do embedded video yesterday I went ahead and added one here.
Posted by J D Lowe at 5:25 AM No comments: 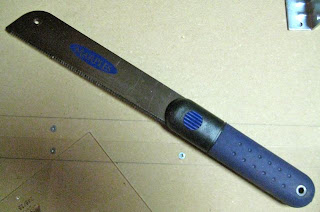 These days when I’m buying stuff I try and make a point of finding what I’m looking for from Canadian or US manufacturers first, and if I can’t find anything suitable, then I’ll buy from other sources. So, it was quite an education when I went looking for a small handsaw with a thin, flexible blade that I could use to cut the buildings in Scarborough Square from their Plexiglas base.

{An aside: I stupidly thought when attaching the various buildings to Scarborough Square that I’d never again need to remove them, so I attached them with dots of superglue. Now that I’m building a new layout, I want the buildings, but have no need for the Square. I had read that acetone was a superglue solvent, but I was concerned that it might also eat away at the styrene used for the building bases. I figured if I had a saw with a very thin blade I could just cut the building bases free. It turned out to be true, and the bases survived virtually undamaged.}

The lowest price saws of this type were manufactured in China by major brand names. There was a very beautiful saw I came across at Lee Valley Tools that was made in Japan, but the price was a bit high for me, and I thought I’d damage it since it wasn’t really meant to saw through plastic. The Marples saw shown in the picture seemed to fit the bill: made in the US and reasonably priced at around $13 or $14.

It’s an excellent saw and I highly recommend it. I had no problem cutting the buildings free from the Plexiglas base (its very thin, sharp blade made this relatively easy), it was then used to cut the curved perimeter support pieces on the new layout board (it was quite impressive at this job as the blade had enough flex to not bind during cutting and overall it had that ‘knife going through butter’ feel), and has been used to cut the layout board’s foam upper surface (an admittedly easy task for any saw). It turns out from my unscientific searching for a saw made in North America it was the only one I found that was made here, so I’m glad it turned out to be a good buy.

Table for the new train board 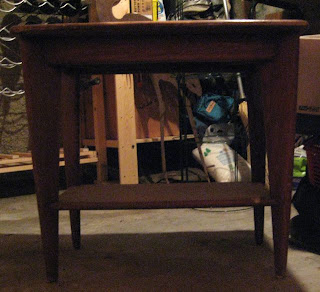 I was talking on the phone to vp last night about this and that. He mentioned that he saw some of the photos of the new layout and thought the workmate shown supporting the board in yesterday's post were its legs. No. Debra bought a nice little mid-50's end table at a thrift store a few months ago, and its been sitting in the basement ever since. It will be the stand when the layout's on display upstairs. Otherwise it'll be on shelf supports in the basement.
That little table looks like its had some rough handling from its previous owners. Its had paint dripped on it, someone signed their name on the top, there's a few gashes, and it's all loose and wobbly. In a few weeks I plan to fix it up a bit and hopefully return it to some of its former glory. 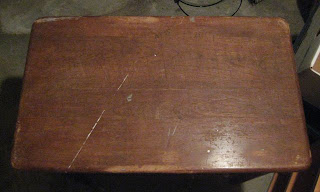 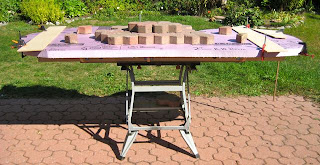 [I used some interlocking paving stones for applying pressure while the glue was drying. I miscalculated on the number of clamps I needed for clamping down the foam at the perimeter - I could have used half-a-dozen more.]
Over the weekend I glued a sheet of 2-inch thick high density foam to the top of the train board. Last week I finished stiffening the 1/4-inch hardboard substrate with 1x3 pine perimeter pieces in preparation for attaching the foam. Although the hardboard is rather thin, once the perimeter pieces are added, the whole surface loses its flexibility. The glued foam / hardboard structure is very solid and doesn't exhibit any flex. Once the board is ready for track installation I'll post more photos showing more construction details. The board is back in the basement awaiting final trimming of the foam to the hardboard perimeter. From there it's painting and then track installation. 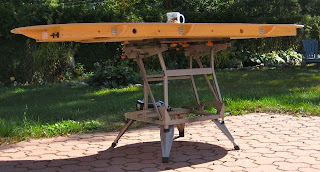 [This view shows some of the perimeter supports on the straight side of the board. They had to be installed at a higher density on the curved edge.]
Posted by J D Lowe at 8:12 PM No comments:

{The Hotel Kaladar two years ago}
We were away this weekend and I didn't get any work done on the new layout. But, we did drive by the closed down Hotel Kaladar that I mentioned awhile ago as being a candidate for an E. L. Moore-esque building project. Much to my surprise the old hotel had been converted to a 'chip truck'. All the windows had been boarded over. The siding was repainted in Harley-Davidson logo style colours and a chip stand had been set-up out front. 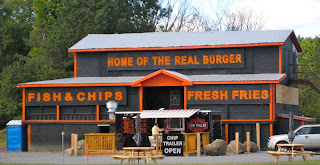 {The Hotel Kaladar today}
Posted by J D Lowe at 7:10 PM No comments:

The layout starts to take shape 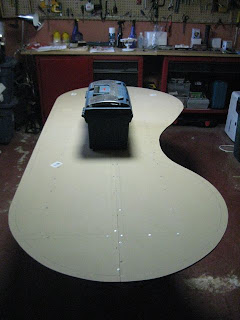 {The layout is 7'4" long and the maximum width is about 38"}
The basic frame and table-top for the new layout are starting to take shape. I'll post some more detailed pictures once it's further along. I was fretting over getting it flat and level and square, so it took a long time to even get construction this far. 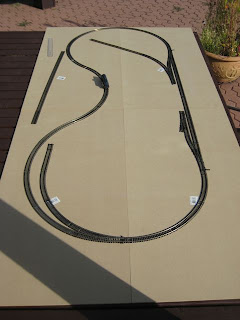 As summers go, this has been a hectic one. I had planned to build the base for the new layout over a couple of days in July – no such luck. I’m starting to get back in the groove and make some progress since I’d like to have something decent ready by the Christmas season. The new layout’s design isn’t completely random :-) and I thought I’d list some factors that are going into it.

When I finally received my copy of the Con-Car TTC Air Electric PCC streetcar from George’s in the spring I realized it would be good to have a continuous loop on the layout for just letting it run. This kicked off a long think about my layout, and in the process I decided it needed to be scraped and a new one built that better reflected my interests. Some items that might be incorporated (in no particular order):

3. Buildings can be swapped in and out and re-arranged and don’t have to be ‘realistically’ arranged.

4. Portable, easy to carry, fits in my econo-box car

5. Easy to take upstairs from the basement for showing off at Christmas and such

{I finally picked up a copy of this Eric Clapton classic this summer. I was too young to appreciate it when the lp was first released, but since I've been hearing a lot about it lately, I thought I'd finally buy a copy. It's good. Mr. Clapton's hit I Shot the Sheriff is on this disc. To me it sounds like it's the most polished piece on the album - so polished that the other songs, although good, seem almost a little rough around the edges.}
7. Ocean
8. Streetcar to the beach
9. Offers a little switching, but not overly operational in a classical sense
10. Roadless
11. The smaller, the better, but not too small.
12. Urban idealization
13. Linear
14. Innocuous track
15. Lights and lighting and LEDs
16. Surfboard sized
17. Pedestrian
18. Lightweight
19. No corners
20. Retro-future, modern, re-purposed stuff
21. Eye-level views
22. DCC
23. Landscape view
24. Sydney-by-the-sea
25. Blue, green, sunny, open
26. Percherons
27. People, figures, easy living 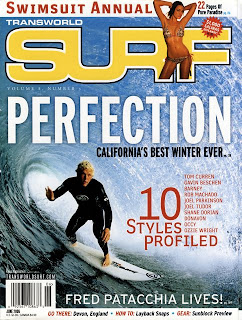 {A couple of years ago one of our friends stayed with us one weekend. He was a surfer who, although based in Ontario, had travelled to a few famous surf spots around the world. As a parting gift he gave me a stack of old surfing magazines! They're odd and good at the same time.}
28. Streetcars, small diesels, trolleys, railcars and any other small rolling stock
29. Clean construction 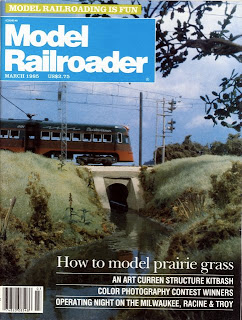 {I've been thumbing through my collection of old Model Railroader magazines. This one is the March 1985 issue. I love the cover photo - uncluttered and straightforward. The article the photo refers to - how to make prairie grass with fake fur - is excellent too. There's a photo on page 65 where the author shows a Boeing LRV model on the WWII (?) era layout and the editors give it something of a thumbs down for being unprototypical. But it still looks good and I think that is an important key.}

As I mentioned at the top, the biggest problem with my current layout is that it doesn’t have a continuous loop anywhere for just letting things run. After I had ran a few switching problems I was bored, but didn’t want to admit it. But that was probably because I was busy doing what I liked to do: build buildings. Scenes too. I had a lot of fun building the Bookery, and that experience also factored into the new layout. I wanted a display space that could be taken wherever I wanted and not confined to the basement. There’s probably many Bookerys in my future and I wanted some place where it was easy to show them off.

I'm finally back working in the base and hopefully will have some pictures posted soon.