I finally finished the commuter station at Scarboro Square. I must admit it’s a rather minimalist structure, but even with all its design flaws, I like it.

One thing I forgot to mention in the first post was that there is a styrene tube in the roof that all the panels rest against to give the structure some strength. You can see the tube fairly clearly in the end views.

The benches and figures are Woodland Scenics items, and the trash bins, bike-rack, and pay-phone are from a set of city details from Walthers.

The cars are - I think - all items from Model Power. They produce some fairly modern cars that aren’t too expensive, so I’ve bought a few from them. But, I’ve learned recently that ‘modern’ is a relative term. One 9-year-old visitor asked why I had so many old cars - ones from the 80’s that is - and didn’t have many new ones. I hastily pointed out that I did have a Porsche Cayenne and a Mecedes SUV. That didn’t seem to excuse the affront of the Gremlins, Pacers, Tempos and the 1980s Hondas. Yikes! My frame-of-reference is that cars prior to around 1975 are too old for the ‘retro-future’ of the 30 Square Line, but apparently my biases seriously dated me. I went out and bought a 2006 Audi from Model Power to help regain my with-it status, but no doubt, it’ll be seen for the lame attempt at relevance that it is :-) 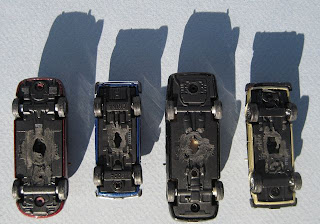 Whining aside, the Model Power cars are good value, but they need a little work to help them appear a bit more realistic. They are shipped in little clear plastic boxes and have a mounting moulding in their chassis to keep the model secure in the box during shipping and handling. This unsightly moulding is usually visible from a ‘street view’ of the vehicle. So, the first thing to do is grind it off with a Dremel tool. I don’t bother filling the resulting hole in the chassis since it can’t be seen once the car’s in place on the layout.

Next, you’ll notice that on many of these vehicles the side mirrors have mirrors that are the same colour as the body and need to be painted a silverly colour. After that, a wash of thinned flat-black paint over the wheels and grills helps to define the shadows on the recesses and tone down the flashy chrome.

I like to add license plates for a little extra realism. Penitentiary Products produces some excellent ones for Ontario - as well as a number of Ontario highway signs. Once they are in place I also tone them down with a wash of flat-black - but, be careful because it’s easy to completely obliterate the plate with too much wash. 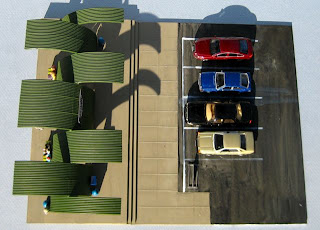 I need to add a few more details, but that’ll wait until the station is installed in Scarboro Square and some of the gaps in the landscaping are worked up.