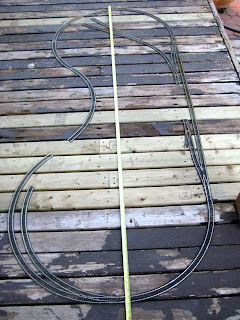 [The plan so far: about 6.5 feet long; far loop has a 30 inch diameter and the near loop is a compound curve with a 36 inch diameter.]
I've started to plan a new, portable layout to better match my interests. It'll replace my current setup. I've got a box of old track and thought I'd use it to try out some ideas on the back porch since it has a large flat surface and the weather is good. 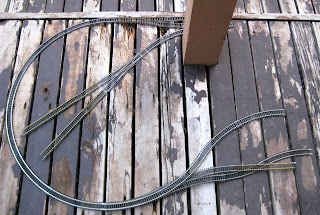 [Trying out some different curves for the squeezed in middle section - I'm in the middle of replacing those rotten deck boards!] 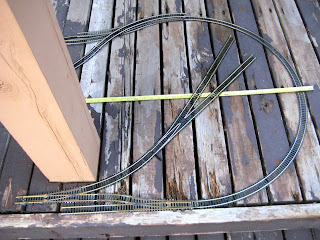 [There'll be a passing track on the back so some switching can happen independently of the main loop.]
In a future post I'll go into some of the drivers for this new design - and have the deck all fixed up too!
Posted by J D Lowe at 7:18 AM No comments: 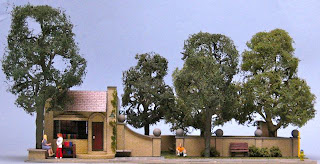 Last weekend I finished reading David Foster Wallace’s Infinite Jest. I finished Louis L’Amour’s The Daybreakers. I finished cutting the lawn. Finished getting the plumbing to work. And I finished The Bookery!
This last phase of construction was focused on building the courtyard and associated exterior detailing.
The base is cut from a sheet of 0.080 inch styrene that was sized so that it fit snuggly into the centre of Scarboro Square. This meant that the courtyard was considerably larger than the one shown in Mr. Moore’s article. He never specifies its exact dimensions, but it looks to be about the same square footage as the Bookery. Mine is around 2 or 3 times bigger. 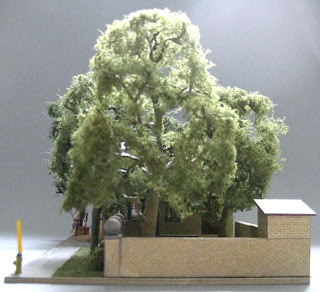 The sidewalk and concrete areas on the base were scored with simulated expansion joints and then painted with a loose mixture of Polyscale concrete, gray and flat black. The courtyard lawn is simply a piece of Woodland Scenics grass mat cut to fit the area and glued down with superglue. 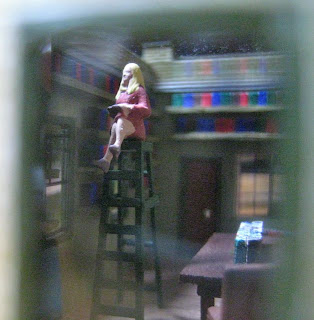 The courtyard’s perimeter wall stands 4 feet tall and is built up from pieces of 0.040 inch styrene covered with the same brick-paper used to cover the Bookery’s walls. I placed the outhouse in the far back corner because, well, it’s an outhouse, and it didn’t seem right to place it beside the public sidewalk  I also changed its roof to a slant-style to make it a little more outhousey. 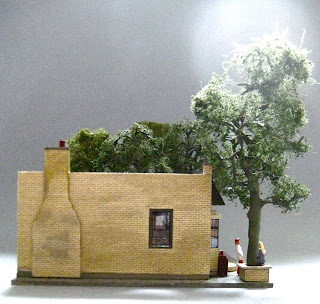 One thing I should note is that I mixed a thin wash of Polyscale concrete, a little gray, and a dab of flat black paint to tone down the brick paper a bit. Be careful if you do this so as not to obscure the mortar lines and lose the fine brick detailing. Keep a tissue at the ready to quickly soak up any excess paint. The wash also helps to hide the white edges of the brick paper wherever they might standout.
I built a second ‘roof’ for the Bookery: a simple piece of clear plastic to allow the interior to be viewable, but help keep dust out. The ‘real’ roof –made from a piece of 0.060 inch styrene with a piece of fine sand-paper bonded to the outer surface – can simply be placed on top of the clear roof when a more realistic look is desired. The clear roof wasn’t glued in place so that the interior can still be accessed if necessary. 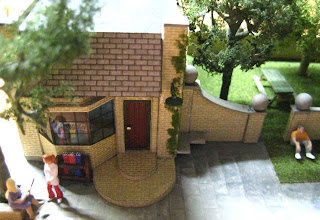 I figured the courtyard needed a few trees, and I decided to use some sold by Bachmann in their Scene Scapes line. I had used some of these for the Deroalow grounds, and was happy with them; however, I was surprised by the branch structure on these ones I bought last fall. I should have looked closer at them in the store because when I took them out of the box I was surprised by the flat, ribbon-like branches. The trunks are ok, as are the fine branches that connect to the ‘leaves’, but the internal branches are simply twisted, ribbons of metal. If you don’t look too closely, the foliage helps obscure them, but, overall, they detract from an otherwise nice product. Some judicious placing and orientation helps to come-up with an acceptable tree arrangement in the courtyard, so something was salvaged. 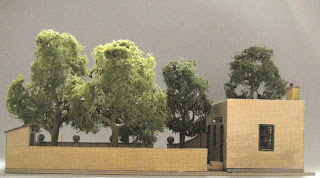 The bench outside the courtyard wall is built up from wire, styrene and balsa wood. It’s based on a bench design the city uses at some of its bus stops; however, mine isn’t an exact replica. The fire hydrant is a detail item from Walthers. I added a snow depth indicator arm because it is, after all, Ontario. The bookcase outside the Bookery’s bay window is built up from balsa scraps. I added some steps to the side-door because it seemed like a long drop to the ground without them. Also, I added a brick planter for the tree outside the front of the Bookery – it seemed that a tree was needed on the left to give some visual balance to all those trees in the courtyard. The planter is also built-up from balsa scraps. The nice little picnic tables in the courtyard are laser-cut kits I had bought awhile ago, but unfortunately I’ve lost the manufacturer’s name. 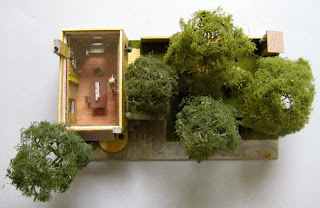 Well, that wraps it up for Uncle Charlie’s Bookery. Even though I flubbed a few things along the way, it’s been a fun project that I’d highly recommend to anyone looking to get started with old school builds. 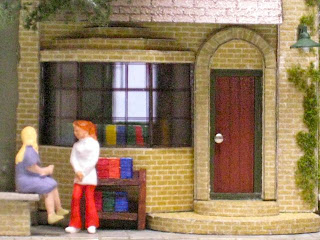