You may recall that Martin and I have been trying to track down the source of machine tools E. L. Moore used in his Uncle Peabody's Machine Shop project. After some intense investigation Martin sent me a page from AHM's 1963 catalogue that shows a set of machine tools in the lower left corner. Maybe they're the ones we're looking for. Or maybe they're the ones E. L. Moore thought were Airfix products that could be bought for the sum of 50 cents F.O. B.? Although, Vince had a different idea, and has been tracking down some machine tools by Alexander Scale Models, although I can't get the Alexander links to work to have a look. Investigations continue.
Posted by J D Lowe at 7:26 AM No comments: 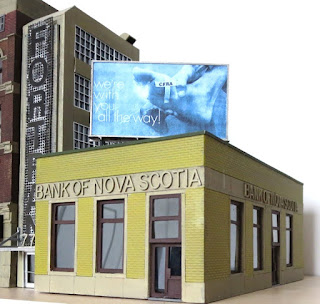 Yesterday I did something I haven't done in a long time: built a model in one day (ok, it was a simple one) :-)

Rooftop billboards were fairly common in Toronto at one time, and the real estate on top of the bank of Nova Scotia building looked like it needed one.

The entire project was freelanced from studying some pictures and then gluing up a structure from various pieces of Evergreen styrene strip along with a small piece of 0.020" styrene sheet for the billboard's main surface. 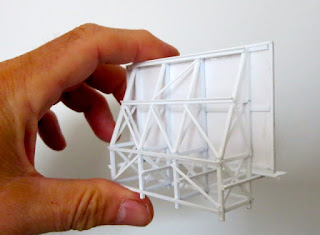 The advertisement for radio station CFRA was scanned from their 3 May 1971 top 30 leaflet I found stashed away with some old papers, and then sized to fit the billboard. According to their top 30 for that day, Three Dog Night's Joy to the World was number 1, and Chairmen of the Board's Chairman of the Board clocked in at number 30; however, when it comes to model building I usually relate more to their other hit, Give me just a little more time.
Posted by J D Lowe at 2:47 PM 4 comments:

I was fortunate in that the AHM Brewery also included the plans. In the photos the AHM plans are on the right, and those for the Model Power version are on the left. The AHM kit was manufactured by Pola in West Germany, and the kit was simultaneously released by Pola for the European market and AHM for North America. The Pola / AHM plan is wordless so there was no need to create versions in different languages. I assume this was done to keep costs down. The modern day Model Power plans seem overly busy, and I'm not a big fan of instructions that shout at me in ALL-CAPS.

A Tale of Two Breweries

Before diving into construction I thought I'd compare the parts between the Model Power version of the brewery that I bought new maybe 7 or 8 years ago at a hobby store in Montreal against those from AHM produced in the late '60s. In all the photos, the Model Power parts are on the left, and the AHM are on the right. 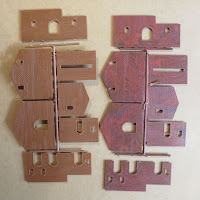 Let's start with the walls. Right away you can see the AHM kit has multi-colour brick wall mouldings in fairly brick-like colours, and the MP version are monochromatic and not too brick-like in colour. This feature of multi-colour AHM parts is carried through on the other parts, and they make the later day MP mouldings look rather crude in comparison. 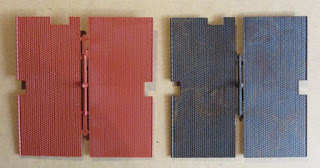 Same deal with the roofs. Much nicer colouring on the old AHM parts. 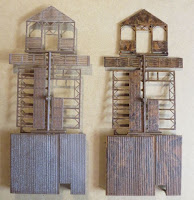 Same with the wood parts. I was planning on building the AHM kit and painting it up and detailing it like the brewery in E. L. Moore's article, but after seeing the parts, I think I might build up the MP version as I don't want to paint over the AHM's colours.

Here are the roofs for the auxiliary wings. I assume moulding the parts in single colours reduces production costs. But, for a model on the lower end of the price spectrum that might not be painted, the unpainted MP model would certainly look more toy-like. 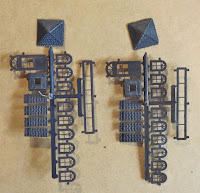 Not much difference on these detail parts sprues. 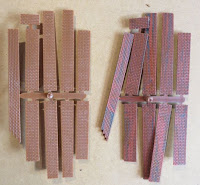 Chimneys and some brick whatnot. Again, the brick colour is much better on the AHM.

Another sprue of 'wooden' detail pieces. The MP version really falls down on the colour of these items. 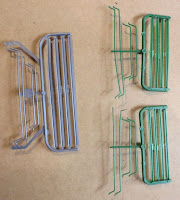 The biggest difference in parts is with the guttering and downspouts. It's quite different between the two kits. I guess the green coloured AHM parts are to represent aged copper, although the shade looks a little too strident for my tastes. This might be one area where the MP colours are better. 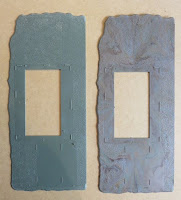 And finally the base. I usually leave the base off these sorts of kits, so to me the colour is irrelevant; however, again, the AHM one is more varied.

Oh, and there was a sprue of barrels with each model.
Posted by J D Lowe at 9:36 AM 1 comment:

Making a start on signs

I haven't been doing much model building over the last couple of weeks, but I have squeezed in a little time to make a start on signs for the buildings in the Canadian Press complex. The Quebec bank building on the left does have a hamburger place on the ground floor called Big Smoke Burger, which we've had great burgers at, so I copied the canopy sign from the prototype. It's just a paper and construction paper assembly. For the bank on the right, I painted up some plastic letters and glued them to the facade with Weld Bond. I think the prototype building was a Toronto-Dominion bank, but since the TD tower is down the street, I didn't want to have too many of the same company. Anyway, for some unknown reason, this little facade said bank of Nova Scotia to me, so that's what I went with.
Posted by J D Lowe at 8:59 AM No comments: 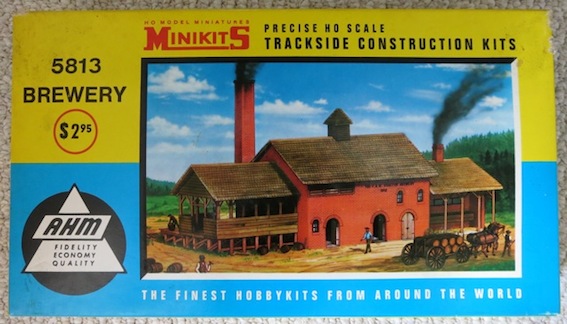 E. L. Moore's Brewery was the first of his plastic kits marketed by AHM. It was released late in 1967, and advertisements from that period show the price was $2.95US, the same as stamped on this box. An internet inflation calculator tells me $2.95US in 1967 is worth around $22.65US in 2020 (which, for reference, is equivalent to $30.75 Canadian as of today). 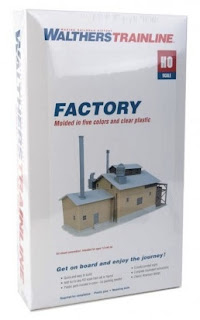 So, what kind of HO scale plastic structure kit can you buy today for $22.65US? Well, for just a few dollars more, for $29.98US, you can buy Walthers Trainline boxing of the Pickle Factory, which as we saw is a version of the brewery. Is the brewery still being manufactured? I don't think so. The last boxing I saw for sale new was the Model Power, but since it was acquired by MRC, and then Lionel, I haven't seen new boxings for sale - maybe there are and I haven't found them, but if I do I'll let you know.

Ok, well, this is a long way of saying that with Trainline being a budget conscious brand, around $30US will get you today what about $3US got you in '67.

Cheap and cheerful? For me the AHM boxing is cool. The Walthers pickle factory boxing will get you a version for less cash, but their boxing is overly clinical and has no vibe. Those boxtop paintings from the early kits are hard to beat.
Posted by J D Lowe at 5:22 PM 2 comments:

Houston, the Brewery has landed. 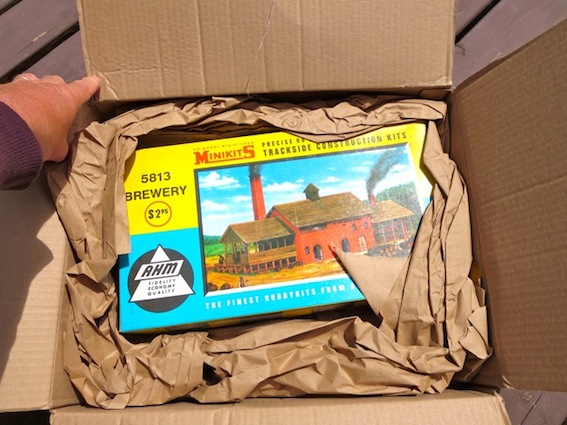 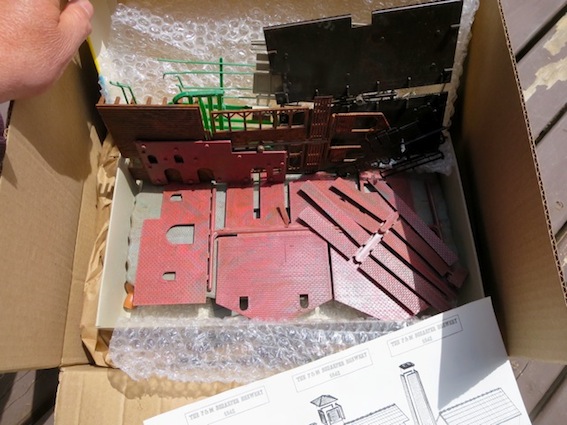 Martin sent me this photo of TycoKit No. 7781, their brown box Stockyard kit. Are you thinking what I'm thinking? Yes, that does look like Ma's Place, or maybe even Speedy Andrew's Garage given the big doors on the front. If you have a glance through the parts, its walls, roof, doors, and windows look like they've been pulled straight from those other kits. The fencing, windmill, and water tower have no doubt come from other kits, but I can't place them. And, to further complicate things, that water tower looks like an N-scale item - to me it doesn't look right for an HO scale roof top cistern. I'd like to thank Martin for his great work in identifying these E. L. Moore designed kits and generously sharing them! The world of E. L. Moore kits certainly is an extensive one. 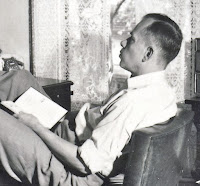 What about his legacy? Well, his name and magazine articles are known amongst some older model railroaders. He's known fondly amongst a few, but others associate his name with low quality work in balsa. Hopefully if you're a long time reader here you'll be aware that although there were indeed some questionable projects, the majority of his work was of good quality, with maybe a half-dozen or so reaching into the craftsman category. I think the photographic technology of his era did many of his projects an injustice, as it did with the work of many other builders.

The plastic kits he had some involvement with appear to be all out-of-production now, although a few of the kits were manufactured for 50 or so years under one brand name or another. There is healthy buying and selling of the old kits online, although it's generally not known he designed them. There are a few exceptions like the AHM kits that credit him in a red box-top label. It's a shame that he or his estate didn't profit financially from the popularity of these products, although I suspect the amounts of money involved would be small.

His plastic kits were in the cheap-and-cheerful end of the spectrum when they first hit the market. But, these days it's not unusual for them to get harsh reviews on auction sites - not to mention be misdescribed - and if built unskillfully straight from the box, they can look crude. But, as with all kits, a bit of care and creativity can yield a decent and interesting model.

The plastic kits constitute a sort of invisible history. Throughout the '70s and '80s they appeared in numerous magazine photos, and as basic components in many kitbashing articles, but in most cases their origin remained unknown. They formed a sort of background music to the model railroading vibe of those decades. Many of the kits are still seen on layouts today, and even in the odd magazine article or two. Again, their appearance in articles, layouts, and at auction sites is an almost silent Moorian melody still playing through model railroading.

And he's credited with influencing the design of a few laser-cut craftsman-style kits. I've found a couple online, there might be more out there. Time will tell.

Overall, I'd say his legacy is somewhat modest, and a bit on the invisible side, compared to that of say John Allen or John Ahern.

An aspect of his legacy that seems completely lost is his approach to modelling and writing that I touched on in The Moore Way. This aspect isn't alive in the kits simply because they're mass produced consumer products. And, ironically enough, Mr. Moore hated to build kits, so you can see why it's odd that the most enduring part of this legacy, kits, are things he himself hated building.
Posted by J D Lowe at 9:54 AM 4 comments:

I was doing what I do a lot these days, browse the internet during 30C+ heat, and as is often the case I stumbled across this E. L. Moore inspired kit: Builders In Scale's Lean's No. 2 Warehouse. The page states: It's based on an old MR construction article by E. L. Moore of a simple old fashioned warehouse that's all but falling down. Looking through my photos I think the kit is based on the large leaning building part of E. L. Moore's Central Warehouse model described in his article Turn backward, O Time that appeared in the January '67 issue of Model Railroader. The kit looks quite nice, and once again we see another E. L. Moore design surviving into our times.
Posted by J D Lowe at 7:57 PM 6 comments: