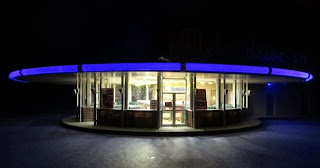 I finally got around to installing the roof-top perimeter light as well as the light in the peak. The perimeter light is a length of 3mm diameter, side-illuminating optical fibre I purchased from The Fiber Optic Store. It's lit up with one of their blue LED illuminators. The peak light is simply a plain old clear LED.

Now, a 3mm diameter perimeter light isn't too prototypical since that translates to around 10 or 11 inches in HO scale. The kit's box top shows what looks like two, smaller diameter tubes wrapping around the dining room roof; however, I thought that was beyond my skill level to replicate, so I chose an optical fibre whose diameter was close to the roof's edge thickness. 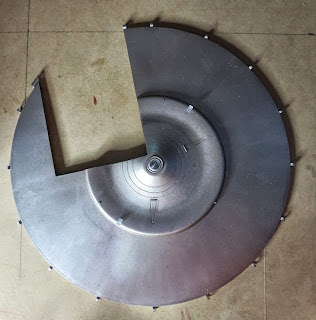 The roof was base coated with a spray of Krylon aluminum paint. Once dry, it was then lightly dusted with Krylon gold. Then, after curing for around a week, it was washed with some highly thinned flat black to tone things down a bit and highlight some of the panel lines on the Enterprise's contribution.

Before painting, I glued to the perimeter a number of styrene pieces cut from a tube with an inner diameter of 3mm. They were first attached with tube glue since it allows some time for getting the alignment right before hardening. Once the little pieces were all in place, I then went back and carefully dabbed on some liquid styrene glue to get a very solid joint for each mini-tube. 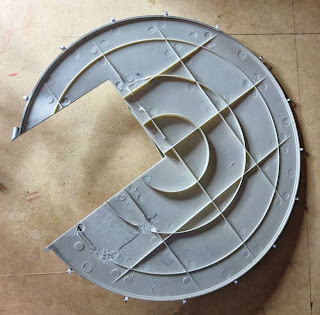 Some of the ribbing on the roof's flip-side had to be ground out to create passageways for the wires from the interior lighting. 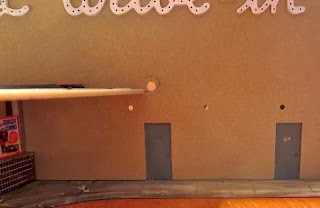 Before installing the roof, a 3mm hole has to be drilled in the wall with the 'Mels' sign for the optical fibre to pass into the main building.

Likewise, a hole had to be drilled near the building's inside corner for the wires from the peak light. At this point I went on a little diversion. I just wasn't happy with the height extension I built into the walls - the more I looked at it, the more it seemed way too tall. I got out the hot-knife and cut it down to size. Caution is the word here. 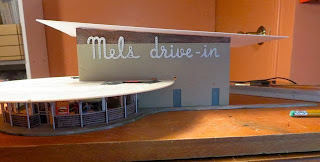 After a half-hour of nerve wracking work, it didn't look to bad and no major goof-ups were made! The above picture is a test to see how the roof might look. After some more humming-and-hawing, I decided it won't have that extreme overhang so the sign isn't overly blocked from view. 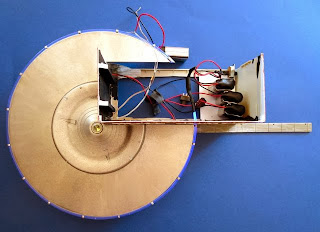 Here's what it looks like from above. The lights are still turned on in this picture. 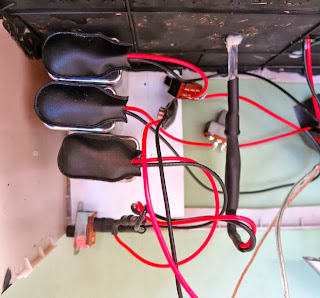 The blue LED in the fibre illuminator is connected to the fibre by a piece of heat-shrink tubing. The wiring is a complete mess, and I need to get this sorted out before installing the main sign fibres.

I was rather happy with the fibre installation. All the little edge tubes and holes were lined up quite well, and the fibre easily slipped into place. 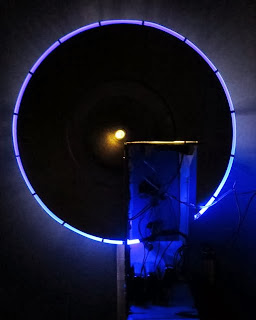 Post-script
I plan to take a break from posting on 30 Squares for awhile as I’m feeling a bit burnt out posting-wise. I’m not sure if I’ll just cut back on frequency, or completely stop for awhile. When I was making the two balsa buildings for the second installment in the E. L. Moore series I found it to be more fun than I first expected, and realized that posting was turning into a bit of a job and might be cutting into my enjoyment of the hobby, so I thought I’d park posting for awhile so I don’t completely sour on it. Thanks to everyone who has dropped by over the years! I appreciate your readership and comments!
Posted by J D Lowe at 1:28 PM No comments: 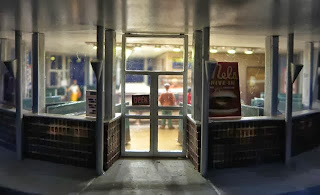 It took me a long time to figure out what to do for lighting this thing. For some buyers, the kit box might be a little misleading because it shows an extravagantly lit building, and it might be interpreted as a message that the box contains all the parts necessary to produce that sort of lighting. To get to the box top state requires some creativity from the builder. My stab at it is hardly perfect, but hopefully it’ll cheer the place up a bit because I think the kit would look a little dark and dreary without some lights. Maybe if there is a second edition of this kit, a photo of the actual painted and assembled building on the bottom of the box would be good so the buyer knows what they’re getting. 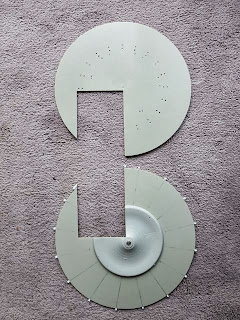 [Inner ceiling is the top piece, and the outer roof is the lower. The ceiling piece was spray painted white.]
For the dining room I settled on two small strips of micro-LEDs. This is the first time I’ve used these types of lights. I bought them for $1.50 each (this is probably high priced from a bulk purchase point of view, but it’s an economical way to buy these things if you just want a couple to play around with) from Caboose Coffee Hobbies at the Victoria model railway show. Basically, all one needs to do is connect a 9v battery to the terminals. No figuring out what resistors are required, and they’ve got an adhesive strip on the back, so attaching them to a structure is clean and easy. 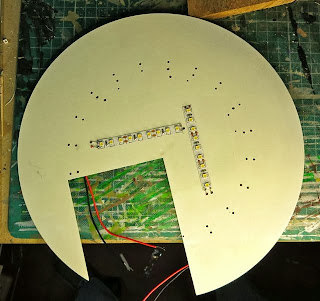 [Here the leads have been soldered to the terminals on the LED strips, snaked through holes I drilled in the ceiling, and are ready for inserting through corresponding holes I then drilled in the building's walls.] 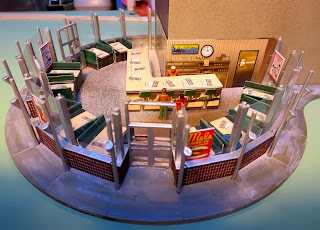 [A shot of the interior before installing the ceiling. A couple more figures were added after this picture was taken. As well, a number of advertising posters - which are supplied in the kit - were glued to the windows at this stage.] 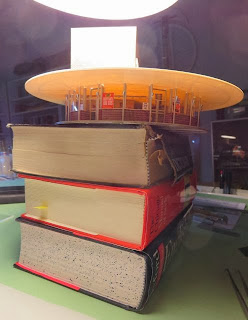 The trickiest part was getting the ceiling attached to the dining room’s circular wall. There are 37 holes in the ceiling and they have to be carefully lined up with the corresponding poles and posts that make up the wall. In preparation, I  raised the building up with some books so I didn’t have to contort myself while fiddling with the pieces, and then shone a bright light over the ceiling so that light came though any of the holes that weren’t secured into the wall frame. I then started at one end and carefully used a pair of tweezers to move each post and pole into its corresponding ceiling hole, gently pushing down on the ceiling to secure each as it was set in place. The kit is well engineered, so everything does line up in the end, but it takes a little patience to get it all together. 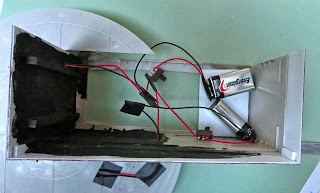 [The power and wiring is in need of some organization so I can get everything neatly into the main building. I'm using battery power so I can move the building around and not be dependent on an external power supply.]
The box states Mels is a level 3 kit and I agree. It doesn’t have a lot of parts or complex assemblies, but the dining room’s circular wall is a tricky structure to get right, but as I mentioned earlier, the kit is well engineered and the parts fit together well unlike the AMTronic, whose manufacturer also rates it a level 3, which I think is because it seems that every single part requires special filing and fitting – so much so that I’ve lost my patience with it for the time being and it’s gathering dust on my workbench.