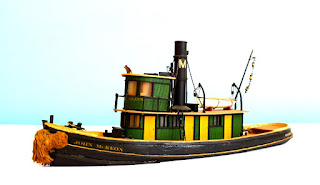 Part 1 of E. L. Moore's article add a Harbor, that appeared in the January 1968 issue of Railroad Model Craftsman, dealt with building two tugboats: the Taurus and the John McKeon. Part 2 dealt with the harbour, and the Sail Loft was part of the scene. 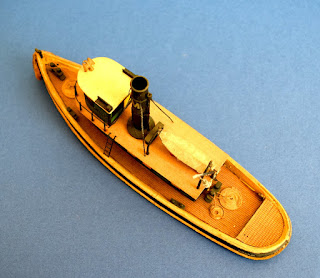 The Taurus was a kit by Model Shipways, but the John McKeon, which looks like it was based on Taurus plans, was scratchbuilt by E. L. Moore.

Mr. Moore notes in the article that he got familiar with ship modelling via "a marked down copy of a book on ship models". I hope I can figure out the title of that book. 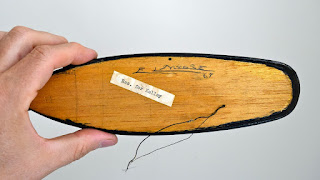 Yeap, there's a light in there.

This boat doesn't appear in either parts of the add a Harbor article. Paul Zimmerman has done extensive research into E. L. Moore's lost articles and informed me earlier in the year that one dealt with the construction of canal boats. I suspect that the Long Beach is one of them. 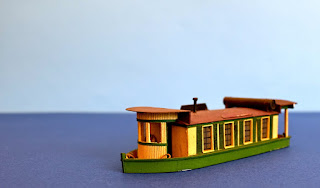 It's the ratio of length to width that suggests it might be a canal boat. 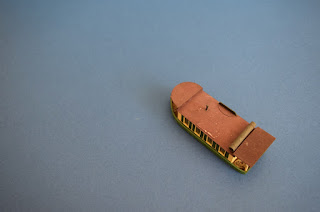 I read that E. L. Moore served on the U.S.S Georgia for 2 years during World War I. There is an interesting article at Wikipedia about this ship, but most of its WW I activity is summarized in this opening paragraph,

When the United States entered World War I in April 1917, the ship was tasked with training naval recruits for the expanding wartime fleet. Starting in September 1918, she was used as a convoy escort. Her only casualties during the war were due to disease, the result of poor conditions and severe overcrowding aboard the ship. Georgia was used to transport American soldiers back from France in 1918–19, and the following year she was transferred to the Pacific Fleet, where she served as the flagship of the 2nd Division, 1st Squadron. 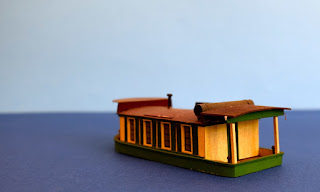 My guess is that E. L. Moore built a number of boats if he followed the precedents he set with buildings. 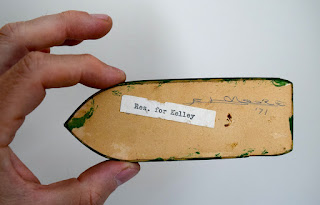