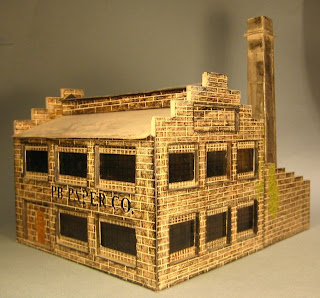 This model was the only E.L. Moore building project that I actually completed back in the 1970s. It’s a build of Mr. Moore’s RMC Paper Company that was published in Railroad Model Craftsman in April 1974. My build isn’t very well done, but it does have one retro-construction method that I still find interesting even though these days your computer and printer could certainly do it better. 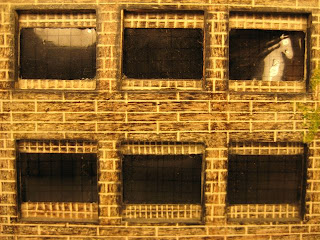 Mr. Moore’s project calls for commercial brick embossed paper for the exterior surface. I’d didn’t have much cash in those days, so I used a technique I had read about in the British magazine Model Railway Constructor instead of buying brick paper. In the November 1973 issue, Mr. Dave Booth wrote - in an article called Rowsley modelled in card - about a very simple method he had developed to replicate stonework on buildings. Here are the steps:
The black-and-white photos accompanying Mr. Booth’s article show two pictures of a building clad with material using his technique and they look good. My young and rather unskilled hands didn’t pull it off too well, but the hues and colours that resulted have some promise. With some finer and more closely spaced scribing work, this old technique might still have some life in it for use in background buildings, and maybe even foreground ones if very carefully executed. 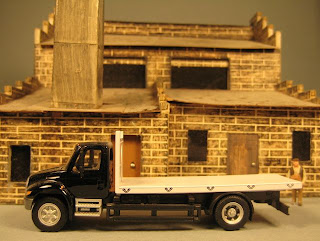 I imagine that I could make my own brick or stone paper with a digital camera, some photo manipulation software, and a printer – and no doubt I suspect someone has in the vastness of the internet. This would provide an infinite source of very good exterior surfaces, and might also point to a way to revitalize many of the projects in Mr. Moore’s legacy.
Posted by J D Lowe at 8:00 AM