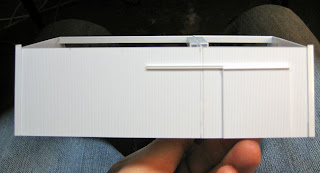 E.L. Moore published his architectural building projects in the model railroading press from 1962 to 1980. His last one was published just a few months before his death. It should go without saying that was a far different model building era than ours is here in the early 21th century. Today we have a vast selection of highly detailed kits and finished structure models that we can buy. In Mr. Moore’s time there was little available for purchasing, and the quality was nowhere near today’s standards. His work helped fill the gap with interesting projects that could be built with common materials – a fair amount of balsa and card – and average model building skills. I guess the question for today is, why bother when we have all this plenty? For me, it comes down to being able to build what you want - instead of just what’s available - without too much overhead. Once you’ve mastered some relatively simple skills, you can construct a wide range of buildings you might see in photos or out in the world. I wouldn’t recommend following all of Mr. Moore’s techniques to the letter since many are quite dated, but pursuing simple – and hopefully cost effective – methods is a worthy pursuit. There’s a path there, even though I often inadvertently stray from it now-and-then. And good humour on the journey is always important  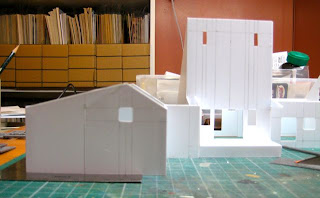 The recyclery – I admit I made this word up, but it seems to fit – is a new addition to the older barrel and marble works wings. Those sections were obviously parts of a mill of some sort that has been re-purposed instead of demolished. This being the case, parts of the recyclery were modeled to reflect being built from relatively new metal components. So instead of a plain styrene sub-structure, several walls are built from molded styrene whose surface will be the final surface on display. The plan with the barrel and marble works portions is to cover them with a metal siding that will be given a moderately distressed, aged finish. 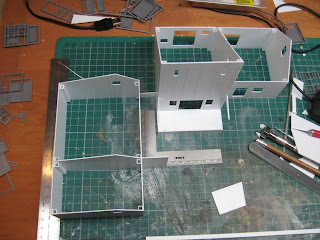 The prototype recyclery is a rather large structure – far too large for the layout. I sized the model so that it fit on the layout - between the tracks separating Bunn’s Feed & Seed and Art Park – and visually retained the look of some of the prototype. I had to pay special attention to making sure various types of freight cars wouldn’t rub against the building as they were switched. In the real world it’s unlikely that clearances would be as tight as on this layout, so this is rather unprototypical, but I think an interesting scene is going to result if I can eventually pull the various visual elements together. 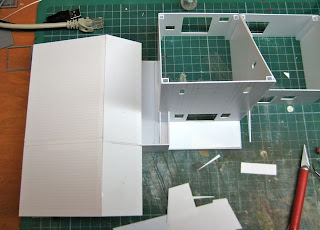 The upshot is that once I settled on the dimensions, I drew the walls directly on the styrene and skipped making any working drawings. The recyclery is interesting in that it’s a modern building grafted onto an older one. The old one is built from 0.040 inch plain styrene and will be paneled in the same style as the other old parts, and the new graft is cut from a sheet of Northeastern styrene that has molded panel lines to represent vertical metal siding (unfortunately I’ve discarded the plastic envelope it came in so I don’t have the part number). 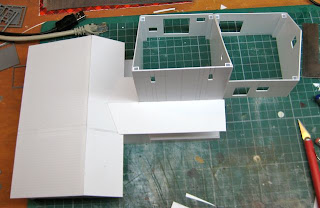 With this post I’m almost caught-up with the current state of construction. Right now I’m in the process of gluing the siding to the older parts. Hopefully I’ll soon have a post on how that’s going.