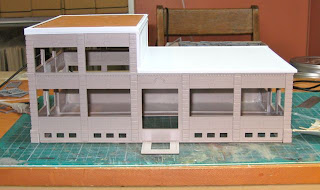 Other than cutting up the kit into a new shape, the biggest job on this building was constructing the new roofs and the hanger facility doors. Both were fairly straight forward tasks. 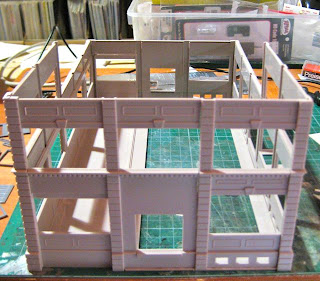 {Here's the glued back together building after the shortening.}

First though the newly cut building halves were fitted, glued together, and puttied to get the basic structure back in one piece. The next job was to build the hanger-door wall for the second floor. This was easy. It’s just a piece of 0.040 inch styrene with some Northeastern styrene simulated metal sheeting laminated to the front with Tenax glue. I don’t normally use Tenax, but it came in very handy here since it made a very quick and strong bond. The doors are cut from the same Northeastern sheeting and bonded to the wall face. Note that I didn’t actually cut a door opening in the front hanger wall. Some u-shaped styrene was then added along the top to simulate a track for the doors. 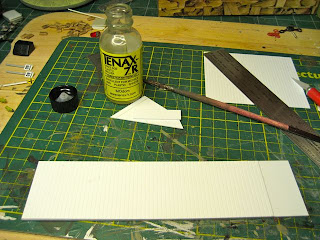 {Bonding the plastic 'metal' siding to the hanger door sub-structure.}

Both roofs were cut from 0.100 inch styrene for extra strength. Gluing to the roofs to the tops of the walls was a bit tricky because the wall panels were a little warped. Some dexterous pulling-and-pushing, along with some clamping, while the glue was setting up helped get everything square. The gluing sequence was: first, the shuttlecraft landing pad roof was glued to the first floor, then the hanger door wall was attached, and finally the hanger roof on the second floor was added. 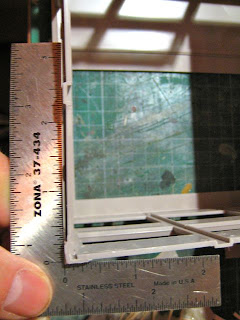 {Shortening the building weakened it a bit and it was out of square.}

The hanger roof then had a piece of fine sandpaper superglued to it to simulate roofing material. Finally some L-shaped trim was used to edge the roofs to clean up the appearance.