When we last saw Ed and Leslie, Leslie was waiting for the police at Dr. Ellesmere's house in Cobs' Corners, and Ed was hopping a train to Ottawa to follow-up on a clue a thumb pointed out. Could you turn up the volume a little before they get started .... 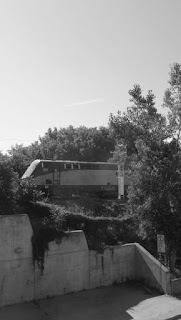 Ottawa’s a weird place. Don’t just take my word for it. Go there and find out for yourself. I did.

Leslie stayed behind in Cobs’ Corners to deal with the cops. It was the logical thing. She knew Dr. Ellesmere best. They were good friends. Me, I only met her once, and that was only briefly. So, I drew the metaphorical short straw and got the next train to the city where, I’m told, fun goes to die. Hopefully Dr. Ellesmere hadn’t done the same.

My train pulled into Ottawa’s downtown station around 1. I called the Lord Elaine from a bank of phones on the concourse level and was glad to hear they had a room. I asked for a cheap one, but all they could do was inexpensive. Beggars can’t be choosers, so I took it. Then I called my hotel in New Toronto to cancel my room and asked to hold my bags. They did and they would - for a fee of course. Here I was on another investigation, but this time without the cushy expense account perks of the Office of Scientific Investigations. I had some dough, but I needed to minimize the damage.

At least the maps were free and there was a large one of downtown Ottawa under glass near the concourse ticket booths. I went over to figure out where I was and where the Lord Elaine and Bank street addresses were. Luckily, they were all fairly nearby and I could walk.

First stop, the Lord Elaine hotel to check in and see if Leslie had left me a message. I followed the signs to the street exits and pushed open a door. I greeted by dead silence.

Ok, dead silence is an exaggeration, but compared to New Toronto’s 24-hour cacophony, this was a Simon and Garfunkel song. I’d forgotten that cars and trucks were banned during the day and only rubber-tired trolley buses, pedestrians and bicycles plied the streets. The worst problem you might have is that some spandex clad Tour de France wannabe on a carbon-fibre bike would knock you over as he dreamed about baguettes and berets. I kept that in mind as I gawked at the deco-gothic-modern-postmodern street-scape architectural melange as I headed over to the hotel.

The war wasn’t as hard on Ottawa as it was on Toronto. Harsh winter weather during the Battle of Ontario worked to Ottawa’s advantage. Toronto didn’t fare as well. All those high school history classes like to tell us it was Ottawa’s brave resistance fighters that made the difference. They were brave. No question about that. But, old man winter was on their side. Staging a ground invasion of Ottawa in late January and expecting to win is pure crazy. Two metres of snow, frozen rivers, and bone-chilling cold did wonders on invading ground troops. An air attack would have worked better, but those guys running the show weren't geniuses. I guess after levelling vast stretches of Toronto they figured Ottawa would just be a no effort mop-up operation. Pure genius.

The end result was Ottawa was a mish-mash of ancient gothic buildings and modernist boxes with lots of frippery tossed in for good measure. A Transylvania meets bargain basement Madison Avenue with a dash of a down-on-your-luck Las Vegas vibe. Toronto was so devastated that the post-war city bore little resemblance to its pre-war self. So, as well as re-imagining and rebuilding and resurfacing and reconsidering, it was renamed: New Toronto.