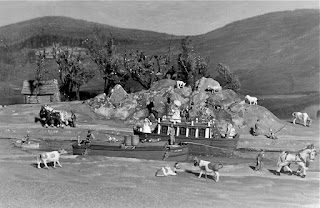 I heard you were in the boat buildings business for canal boats on Bart's Kneehigh Canal so wasn't too surprised to see the manuscript.

Although not definitely model railroad stuff, we think they will add to the scenic effects on some pikes, especially as many modelers are going to olden time railroading, so we're taking the piece and I'll have the cashier's office send you a check for $75 for it.

Glad to see you haven't forgotten MR with your stories....

That was the acceptance letter Model Railroader sent to E. L. Moore for his manuscript, A Pair of Canal Boats. Unfortunately, it never saw publication. Hopefully, the models made their way to Bart Crosby, a friend of E. L. Moore's who commissioned them. 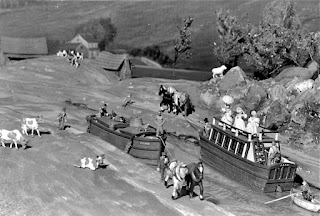 This was E. L. Moore's second manuscript on boat building. The first was add a Harbor to your Pike, Part 1: Tug Boats that was published in the January 1968 issue of Railroad Model Craftsman. I was fortunate to see one of those the tug boats at last year's meet-up. 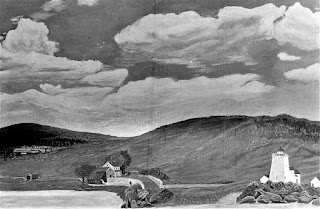 [This background painting was used in the canal boat photos as well as a few others. I think it uses oils painted on a board. Did E. L. Moore paint it? I don't know.]

But, there was also a canal boat on display at the meet-up - it's in the second half of the tug boat post - it was called the Long Beach and was made for his friend Fred Kelley. You'll notice that the Long Beach isn't one of the boats in these photos, so Mr. Moore may have built other boats than were described in these articles.
Posted by J D Lowe at 12:23 AM