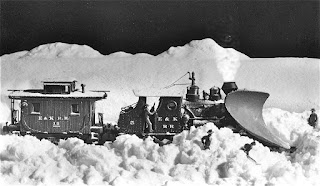 E. L. Moore's articles have mentioned at various times three model railroads that he's built: the Elizabeth Valley Railroad, a 4'x6' foot HO-scale layout, pictures of which were featured in many photo essays and building construction articles; The Enskale Hoentee Railroad, a 30" x 30", N, HOn2 1/2, and T scale project layout he built for Railroad Model Craftsman in its October, November and December '68 issues; and the Eagleroost & Koontree, an HOn3 'layout'.

I put layout in quotes because I think it wasn't a layout in the usual sense, but a narrow gauge model railroad that was staged on some sections of the Elizabeth Valley Railroad and in temporary stand-alone dioramas and scenes. 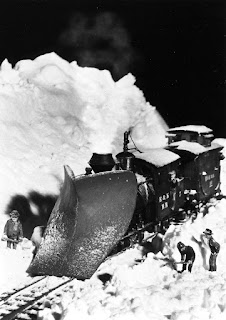 These are some photos Mr. Moore staged along the E & K to show-off a giant snowplow that was featured in his January 1961 Model Trains article, Snowplow in an evening. 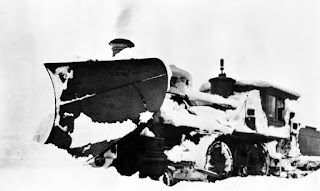 [Virginia and Truckee Railroad Locomotive #18 with snowplow. Sourced from the University of Nevada, Reno Library]

When I came across these photos I thought that plow was some fanciful thing that E. L. Moore had cooked up, but he states in his article, when you've finished, you should have a graceful replica of an oldtime plow such as was used on the old Virginia & Truckee and many other lines back around the turn of the century. And some internet searching confirmed that it was an actual plow. 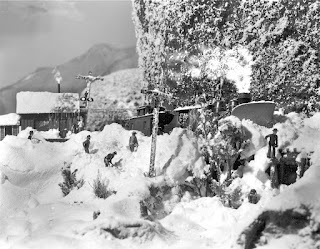 The thing I find mindblowing about the article is the lavish attention paid to what is admitted to be a model that cost no more than 10 cents to make. The article has no photos of the plow in various stages of construction, but instead has 4 large, elaborately staged photos of the plow in action clearing Goat Pass on the E & K. I think the 'construction' article was just an excuse to show-off some fine photos. 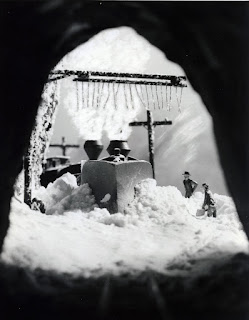 Here's a game to consider: take a cheap, insignificant piece of model railroad equipment, or some other innocuous model railroad prop you happen to have around, and use it as the centrepiece in a staged scene. Photograph it. What kind of story can you tell? Where does the story lead? 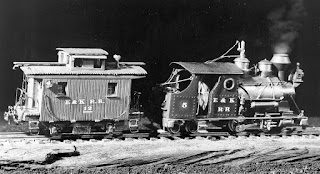 Here's the locomotive and caboose without the plow. The loco's likely freelanced, or "mongrelish", as Mr. Moore notes in the card taped to the back of the photo. 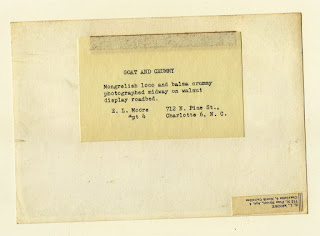