I've been working on converting the first series of Streetcar Noir posts, Light Ray Blues, into a Kindle book, and figured I'd release it before continuing on with the second series. The conversion is a pain and although I'm close to finishing, there seems to be more pain on the horizon. So I thought, 'why wait', and go on with series 2. There were 4 earlier posts,
Package Deal
Gone to the country
Secret Origins
If a phone rings in the forest

along with a little side trip into The Twilight Zone,

Today's instalment, Late for Work, is part 5. So drop your ticket in the fare box and grab a strap for a second wild ride with Leslie and Ed! 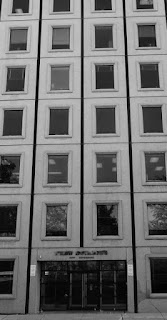 I guess my enthusiasm for trolley riding through the woods, looking for lost observatories and what-not, is a lot less than I thought. As soon as Leslie hung-up I started closing up the shed and began preparing to go meet her the next day at Dr. Ellesmere’s lab in New Toronto. At 9am or 9pm, I wasn’t sure, but I decided to leave immediately and get a hotel room by the Davisville station. From there I could drop by the lab at 9am, or later at 9pm, or just call her, or while away the day. Hell, I didn’t care, I just wanted to get back to town.

Turns out when Leslie says 9, she means 9am. As I walked into the lab at 9:03 am the next day, there she was, standing in the foyer to Dr. Ellesmere’s simulation complex, talking to another woman. Well, maybe not talking. Yelling was more like it. As I got closer, the body language suggested all was not ok. I had arrived in the middle of a heated exchange.

Leslie’s a real pip. You can set your watch by her too. As long as your watch is one of those Salvador Dali melting things. But, today was different: Leslie had arrived around 8:45. She was on a mission.

“We don’t know where she is,” was the grad student’s wrung out reply.

Leslie glared at her. If looks could kill.

The grad student took this as her signal to make a call. She hightailed it to the nearest phone.

Leslie turned to me and got right to the point, “Mary said she had the results of her analysis of the fusor and to meet her here this morning.”

“I take it that it’s not like her to be late for an appointment and not call?”

“No. She’s very punctual. If she’s not here and didn’t call, then something’s wrong.”

We watched the grad student make concerned faces as she held the receiver to her ear. After about six or seven grimaces she hung up and came back to us.

“Dr. Ellesmere didn’t answer. I let it ring a dozen times. I guess her answering machine is off because I couldn’t leave a message,” reported the grad student.

Leslie gave me a concerned look that was even more concerned than those grad student poses, “Let’s go to her house.”

Leslie wasn’t asking me, she was telling me.

What else could I say. I’m a sucker for travel.