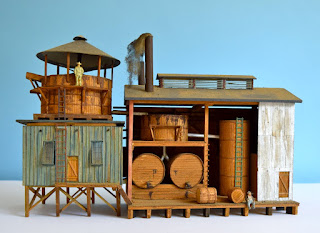 Imagine my surprise at seeing this build, and that it's in excellent condition. This is another of Mr. Moore's builds that was turned into a plastic kit. Last year I stumbled across a still factory-sealed one and built it over the summer of 2014. That post is now one the top 5 most viewed posts at this blog. Before we go on I should note that the roof is on backwards in my photos. Those smoke stacks should be sticking through the roof over the metal-covered portion of the building on the right. At the time I was excited to see this model and overlooked that misconfiguration before I took these photos. It's easily righted, since, as we'll see, the roof comes off and can be flipped around.

The Molasses Mine and Factory was published in the February 1969 issue of Railroad Model Craftsman. I'd always wondered why this project was turned into a kit because this is an odd building and a complicated one to construct. The magazine photos didn't make it seem too appealing, and even the box art on the kit was rather dreary. But, seeing it in person blew all that away. It's well designed, skillfully built, and, just as importantly, intriguing to look at and stands up to multiple viewings - which is an important quality to have. Yeah, it's function is odd, but as long as one isn't too straight-laced about industrial relevance, it could be a great destination on a model railroad. 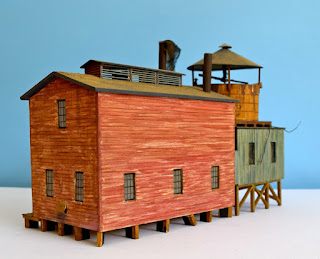 The kit had no windows on the back wall, but you can see on the 'prototype', they, along with the uneven colouring on the siding, help breakup the vast expanse and make the wall appear more than an afterthought. 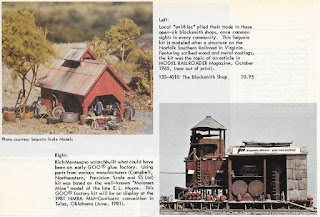 [Paul Zimmerman has done extensive research into the kits that have been produced from E. L. Moore projects - and I'm grateful that he has shared it with me. As well as the initial round of plastic kits that were licensed by Railroad Model Craftsman and produced by AHM, there have been a number of craftsman kits produced by a variety of manufacturers over the years. This scan is from Paul's collection and shows a version of the Yard Blacksmith Shop that appeared in the October 1965 issue of Railroad Model Craftsman in the upper left, and the Molasses Mine and Factory down below. I don't know what Mr. Moore's involvement was with the creation of those kits.]

A gentleman who worked at a hobby store E. L. Moore frequented back in the '60s and '70s told me that Mr. Moore was paid in kits for the consulting work he did when a number of his builds were converted to mass market plastic models. Railroad Model Craftsman owned the rights to the builds, and as part of the process of preparing the plastic versions, a technician with the manufacturer periodically consulted with Mr. Moore on various aspects of the job. 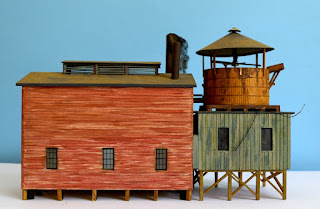 Apparently they met a handful of times. In the end, for this work, E. L. Moore was given a carton of kits. He was free to sell them as he wished to raise money. That was the extent of the cash he saw from those models. Perfectly legal and above board, and maybe even standard practice for the time, but it seems a little shabby.  Especially since Mr. Moore lived on a meager Navy pension from his service in World War I and money from the sale of his articles. From what I can tell, he could have used some extra cash. 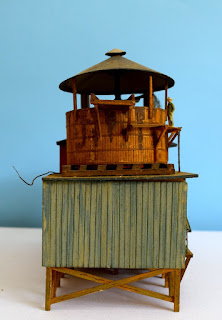 Given that some of those kits have now been in production for close to 50 years, a regular royalty cheque, even a small one, would have been a nice thing have show up in the mailbox. I can’t change the past, but it’s unfortunate to learn that he didn’t profit from the plastic kits. It would be nice to learn in future investigations that he did receive some royalty. I’m not hopeful, although I’d like to be wrong. 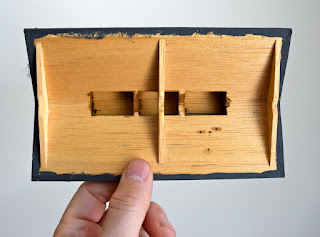 On the drive home recently I heard on the radio a certain obscure folk musician described as a ‘legend’, but the person doing the describing prefaced his comment by saying that he thought it was better to be a star than a legend. Stars have popular acclaim and the money and perks that come with that. Legends on the other hand have enormous influence on the field and its stars, but their work never catches on with the public in a big way. Consequently, the money and fame passes them by. I’m thinking E. L. Moore was in the legend category. 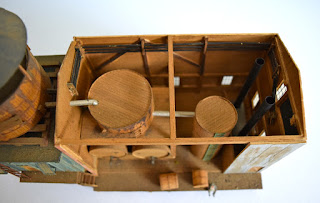