Was E. L. Moore Gil Mellé’s successor?: A bibliography and some wild speculation 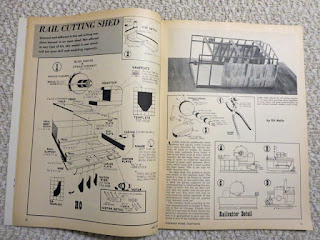 Awhile back I wrote about how jazz great Gil Mellé was also a prolific Railroad Model Craftsman writer in the 1960s. I spent a little time compiling a bibliography of his Railroad Model Craftsman stories as I want to have a reference when, hopefully, I get around to building a couple of his projects – I particularly like his Rail Cutting Shed  that appeared in the May '61 issue of RMC.

I thought compiling this bibliography would be a simple task, and maybe a little tedious. It turned out to be a bit more demanding than I had expected. RMC didn’t appear to have the highest standards for copy at the time. There were numerous instances of table of contents titles not matching story titles, mismatched attribution, and attribution given in the story, but missing from the table of contents. Hopefully, I’ve straightened things out for the Gil Mellé stories. In particular, I should note that as far as titles are concerned, if there was a conflict I’ve used the ones printed on the stories instead of the ones in table of contents. If you see problems with this attempt at a bibliography, please leave a comment so I can fix them up.

If you drop by 30Squares frequently you know that I think everything somehow relates to E. L. Moore :-) and this bibliography is no exception. The thing that struck me as I was compiling it was that during Mr. Mellé’s high output years in the first half of the ‘60s, Mr. Moore’s publications were more-or-less equally spread out across RMC, Model Railroader and Model Trains. E. L. Moore wasn’t predominately being published by RMC; it was just a smattering of stories, and his output in RMC was quite low in comparison to Gil Mellé’s. But when Mr. Mellé’s run ended in ’65, E. L. Moore’s publication rate in RMC took off from then until the end of the ’60s. My speculation is that when Gil Mellé stopped publishing in RMC – likely because his musical career was taking off again -  E. L. Moore was his de facto successor since he could also produce stories at a high rate. Going further with the speculation: if Gille Mellé hadn’t left the scene, it’s an open question as to whether E. L. Moore would have had the impact that he did, and whether any of those AHM plastic kits based on a number of his RMC projects from ’67 and ’69 would have been manufactured.

Well, that's all for now. I leave you with Gil Mellé and his awesome Percussotron.


[4 March 2019 update: Vince cross-checked my list against the online model railroad index and found Mr. Mellé's Dec '64 story was missing from my list, so I've updated it. Turns out Dec '64 seems to be missing from my RMC collection :-( I note that the online index leaves out the Gil Mellé articles that appeared in RMC's Right o' way Models column. It's easy to miss because Mr. Mellé is only credited in small print at the bottom of each column, and not in the magazines' tables of contents - indexing tools would likely have a problem with that, score one for us humans! From what I've read so far, it appears that all stories that appeared in Right o' way Models were by Gil Mellé.]
Posted by J D Lowe at 8:52 AM