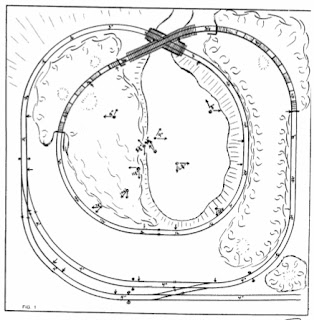 
For years I'd been clinging to a little clipped out photograph showing an HO pike on a card table; just a loop the loop affair with scenery but no switches. I dug this out and did a little doodling and came up with what we have here.
E. L. Moore explains the origins of his Enskale & Hoentee layout in the Oct. '68 issue of Railroad Model Craftsman.

... I read back to those formerly ignored articles and Trade Topics, sent off for about every catalog in the country (one box filled with N scale catalogs now) worked up a track plan that had lain dormant for years with only now and then passing thought...
E. L. Moore explains in a letter to Bill Rau the inspiration for his Enskale & Hoentee.

I warn you now before we go any further, there's wild speculation ahead. You can turn back and I won't hold it against you :-) 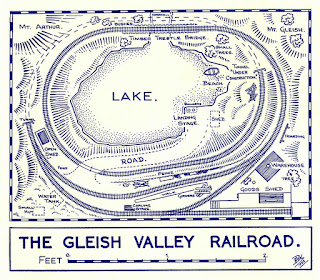 Look carefully at that track plan for The Gleish Valley Railroad. It looks the same as the one used by E. L. Moore for his Enskale & Hoentee RR.

Now, the Gleish is a layout in 2 mm scale, measuring 24" x 36", isn't HO, and does make use of switches. So, on the face of it, its specs contradict E. L. Moore's stated inspiration for his layout. And Mr. Moore would have had to adjust the plan a bit to get it to fit on his 30" x 30" base. Although he did use N-scale, which is pretty close to 2 mm. And both layouts are set in mountainous terrain and both feature a lake in the centre. All are curious similarities.

Even given E. L. Moore's statement on inspiration, cast your thoughts back to The Great Dilly Manufacturing Controversy. E. L. Moore claimed in print that plans for Dilly Manufacturing / 8-Ball Loco Works were owned and developed by a certain person, but it turned out to be otherwise. He could get attributions wrong now-and-then because he used clippings from reference materials and not the full sources. So, there might have been a similar attribution problem over the 15 year gap between the two layouts.

Would E. L. Moore even have read Mr. Hancock's article? We'll never know for sure, but in the introductory paragraphs to the Enskale & Hoentee story, Mr. Moore states he got started in HO scale railroading 15 years earlier, which would be 1953, the same year the Gleish plan was published. When model railroaders get started, they often read everything they can get their hands on, which in those days would be the magazines, so it's a possibility that E. L. Moore at least had a glance at the Gleish Valley.

Or, maybe both are based on that mysterious HO scale card table layout E. L. Moore mentioned? Maybe there is an ur-progenitor layout waiting to be discovered.

Or, maybe it's all just coincidence because a lot of 1950's and 1960's vintage model railroads did share a lot attributes - loop-the-loop, short tunnels through mountains, central lakes, etc.  Given the laws of chance, there was bound to be the appearance of unrelated duplicate layouts.

All that aside, The Gleish Valley Railroad is a gem in its own right. It follows British railway practice and uses English style buildings and rolling stock even though the scenery is very reminiscent of the Rocky Mountains. Everything is scratch built including all track work and the loco. Its modelling and construction standards are very high, and it wouldn't look out-of-place in today's world.
Posted by J D Lowe at 12:34 PM