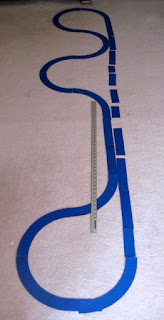 I've started to fiddle around with some ideas using the blue track templates for a very simple layout I'm tentatively thinking of as Edward St. The only thing I've more-or-less settled on at this point are three locations: The Central Experimental Farm at one end, an urban setting in the middle centred around the WSMoftheWBB, and Bluffer's Park at the other end. The Central Experimental Farm will be loosely based on the Ottawa's Experimental Farm, and Bluffer's Park will be even more loosely based on the Scarborough Bluffs - that is, no bluffs, just park and water :-) Addressing the transitions between these three areas to make them seem natural is going to be an interesting challenge.

My blue template experiment was a little hard to keep the pieces aligned while trying out ideas, so I went a little less old school and drew up some simple plans with an old version of MacDraw. In the above picture, a section of the experimental farm would appear in the streetcar turn-around loop on the left and the WSMoftheWBB would sit in that centre dip with some other buildings. Towards the right the scene would transition to a couple of townhouses and Bluffer's Park. 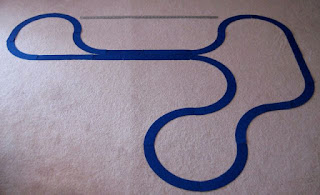 I'm playing around a bit with the templates just to see want might be built. In the above picture, Bluffer's Park is on the right and made to extend down into another secondary loop. Maybe there would be a pond and a picnic area in and around the lower loop. 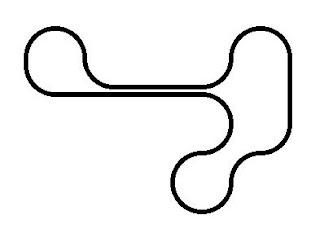 There's the MacDraw-ized version. This of course lead to some 'loopy' variations. 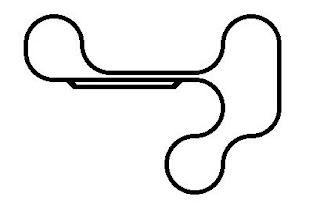 Just tacked on a siding to that one. 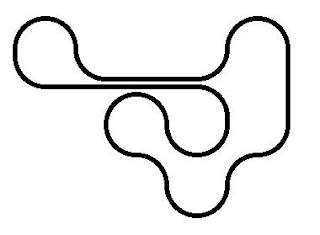 And I got silly with this one. These are nowhere near finished plans; they're just a little exploring with the tools a this stage. These plans are too 'loopy', but after thinking about that last picture it struck me that with some tweaking it might make for an interesting little N-scale setup running Kato RDCs in a rural setting. Anyway, there is still a lot of refining to go.

This week the blog exceeded 20k views. I'd like to thank everyone who stops by for a few minutes every now and then for a read.
Posted by J D Lowe at 8:32 AM