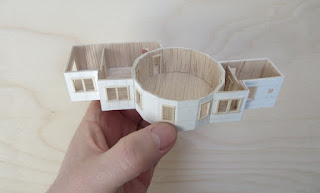 The next step was to add the left and right wings to the telescope room. 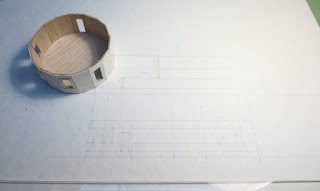 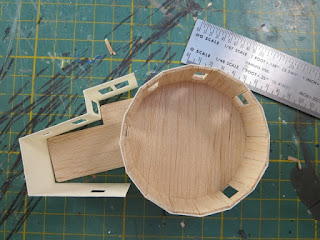 After the wall strip was cut out, the wall corners were scored and folded into shape. In this picture you can see that I've also cut the floor from a piece of 1/16" balsa and used it for some test fitting before gluing everything together. 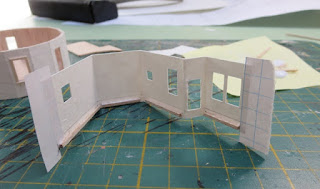 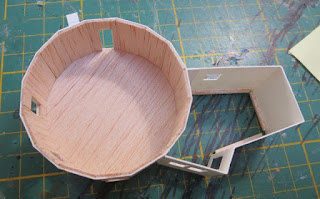 It's a little misshapen before the floor is squeezed into place. Keen-eyed viewers will notice that I've glued the wing onto the wrong sections of the telescope room :-( Once I clued in, I carefully sliced it off, cleaned the residue off the telescope room, and then glued it to the correct section. 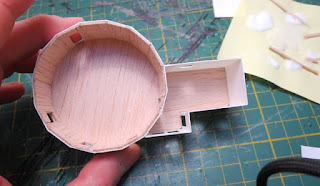 The wing shapes up nicely once the floor's in there. White glue holds everything together. 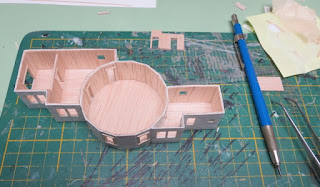 The other wing is assembled the same way. Once the wings were in place, all of the inside walls were panelled with 1/32" balsa. This helps to significantly stiffen the structure and will make for a nice interior since the roofs will be removable. Again, the eagle-eyed will notice that I've cut another door in the telescope room wall that leads into the left-wing - I had mis-located the original connecting door. The left-wing's internal partition is made from a piece of 1/16" balsa. 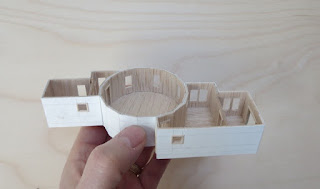 After the interior work was done, all the windows and doors were framed with strip basswood I had in my scrap box. I used the smallest and thinnest material I had on hand as I didn't want to buy anything, but you'll note that it's a little oversize for N-scale.
Posted by J D Lowe at 7:49 AM