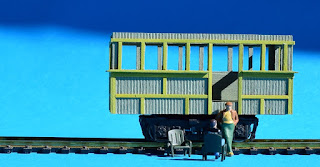 There is no use pussyfooting in this matter. Do we or don’t we wish to wade into a passenger-car? We do? All right, let’s start. If we use home materials, the least we can do is to squander some time. If the result of our labors should not be satisfactory, we always have the trash can.
[Raymond Yates kicks readers in the metaphorical butt regarding passenger car construction on page 273 of his 1939 opus, Making & Operating Model Railroads] 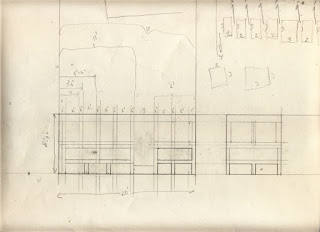 At this point I thought it a good idea to make a drawing of a side and end to better understand the sizes of things. I laid out the drawing in 1/4" scale so I wouldn't have to fiddle with a tiny picture. The drawing's rough, but accurate - it's for working, not showing. You could do this on a computer, but I understand things better when I draw them with a pencil.

Since there are quite a few windows it would be wise to take the precaution of cementing a piece of thin stripwood above and below the window areas to prevent splitting while cutting out the openings (see Photograph A, inside of coach [this photo is missing]). At the same time another piece of stripwood should be cemented all around just 1' from the bottom edge for purpose of providing a ledge, simplifying matters when you come to assembling ends and sides around the floor.

I didn't do that prep work, but cut directly into the basswood without problem. Later, I did install an interior ledge so that the body fit properly on the the floor. 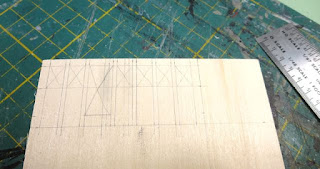 For the coach walls I used 1/16" basswood HO scale clapboard siding. An odd choice I realize, but I had a sheet - from the Mt. Albert Scale Lumber Co. - in my scrap box. The inscribed angling wasn't all that pronounced, so I decided to use what I had on hand inside of buying new material. E. L. Moore used 1/16" corrugated basswood sheet with the corrugations sanded down, so he too likely made do with what he had lying around. So, at least the 'made-do' ethos was preserved :-) Using the plan I drew the side in reverse on the sheet back. 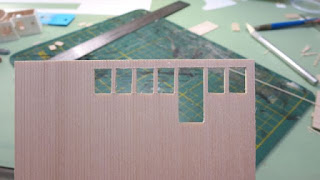 I used a brand-new #11 Xacto knife blade to cut out the openings, and used a new blade on each side. 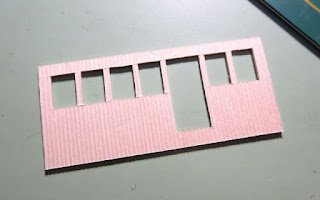 Then the side was cut free from the sheet. At this point the openings are still a bit rough and need to be cleaned up a little with sanding sticks and files. After all this work, and staring at that ribbed paneling for so long, I was reminded of my sandwich grill and had worked up an appetite :-) 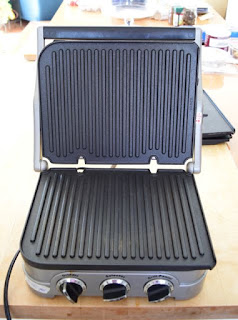 My favourite sandwich is a grilled cheese. Luckily, Debra had read my mind and had bought some aged cheddar, so we were ready to go. 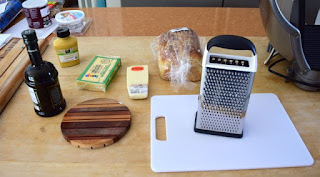 5 year old aged cheddar - Debra picked some organic stuff
Oatmeal bread
Honey mustard
6 slices of double-smoked bacon - if you're in Eastern Ontario, I recommend the stuff from Roadapple Ranch
Honey mustard
Olive oil
Once you've gathered that up, let's move on to assembly. 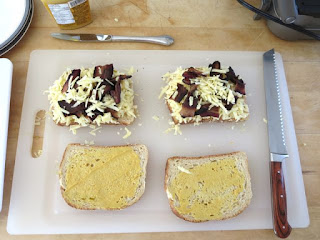 1. If you can convince your significant other to fry up the bacon while you prepare the sandwiches that would be most excellent, otherwise you need to get frying.

2. Brush olive oil on the outside surfaces of the bread. This is so the sandwich doesn't stick to the grill.

3. Shred enough cheese to make a significant pile as shown in the photo.

4. Spread the honey mustard on the bread's inside surface and then pile on the shredded cheese.

5. When the bacon is done, drain off the excess grease, cut into bite-size pieces and then stack equal amounts on both sandwiches. 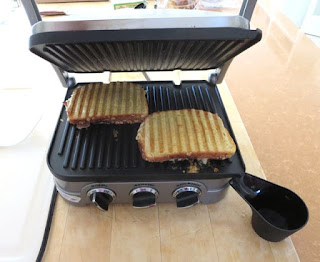 Once the grill is hot, stick the sandwiches in and grill until they're golden brown and the cheese is melty. The aged cheddar will look a bit curdled when done, but everything will taste just fine. 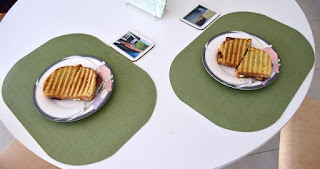 Get some plates; you're done! These sandwiches have intense flavour, so If you want something a little milder, as we did the next day, use a 50/50 mixture of a medium cheddar and mozzarella instead of the 5 year old aged stuff. 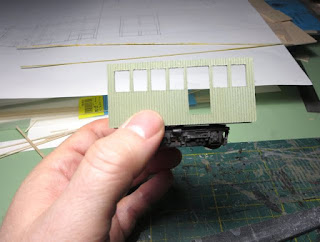 After sleeping off lunch for awhile, it was back to work. The coach wall openings were cleaned up with sanding sticks and files. The pieces were then painted with Tamiya acrylic XF-76, Gray Green (IJN).

Each opening is then fitted with an inner sash of 1/32" square stripwood cemented in so as to be flush with the inside surface. Then, after painting, a single strip of acetate will serve for the row of openings. 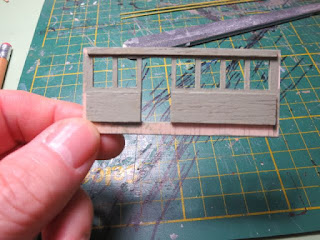 Instead of Mr. Moore's recommendation, I glued in some 1/32" balsa sheet to the inside of each wall. You can see that a ledge is provided for the wall to rest on the floor. These inner panels also act to form a recess for some clear strip to be used as window glazing.

The door isn't cut all the way through. The wood was shaved down to a smooth surface and a simulated door worked in with pencil and knife. It's the type of door which might have been salvaged from a bus, opening as it does, in the middle.

I did go ahead and cut the door all the way through. I'll make up a separate door and install it when I get around to adding the windows.

For trim, I used Mt. Albert Scale Lumber Co.'s 2x4 scale lumber strips I had in my scrap box. Trim pieces were painted with Tamiya acrylic XF-4 Yellow Green prior to installation. I thought it would be tedious gluing all that trim into place, but it was a surprisingly pleasant activity. I think it was because the sides seemed to come to life as each piece was added. 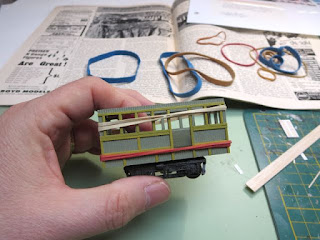 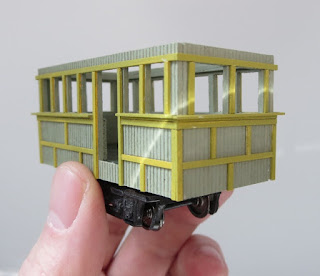 Well, it was a little awkward to apply trim strips to the ends after assembly, but it wasn't too hard and I got the alignment I was looking for. Digital photos are unforgiving, I see a few areas that need some touchup painting :-( Gotta go clean up the grill - until next time. 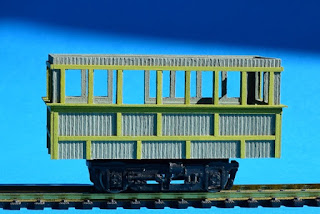 Probably there is a moral side to this car building. Many beginners are afraid to tackle the job of making a car of any kind, feeling that it is quite beyond their skill. This is a rather cowardly attitude. Perhaps our first work will not merit a blue ribbon, but what of it? As we move along, we shall gain in experience and, if we are made of the right stuff, we shall eventually reach a point of perfection that will permit us to fashion cars of all sorts with really delightful results. It costs little to nothing to try our hand at it. We don’t need to buy our scale trucks or couplers unless the body of the car merits such attention when it is finished.
[Raymond Yates revels the secret that all experienced model builders know: keep building, don’t give up on page 278 of Making & Operating Model Railroads]
Posted by J D Lowe at 7:03 PM