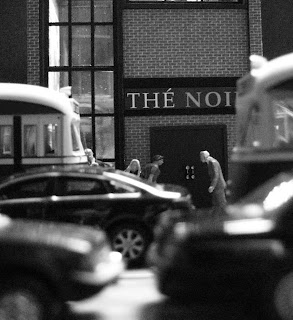 I ran up the stairs beside the escalator to bypass the exiting crowd. I was puffing by the top and stopped for a second or two. She was already outside. I pushed through a stream of people heading down to the trains like a salmon going upstream. By the time I was outside on the sidewalk she was across the street. She went into a coffee shop.

I followed and stood outside at what I thought was a discreet distance and tried to act nonchalant. I probably stuck out like a sore thumb. I sneaked a glance in the window to see where she was. I couldn’t see her anywhere.

She walked back into the coffee shop from an interior door wearing the chain’s blue uniform and stepped behind the counter. Killer by night, barista by day.

There was a payphone between two curbside charging stations. I needed to call Adams. I fished in my pocket for the card he gave me, dropped in a dollar and punched the number.

His secretary answered. I explained what was happening. She went to find him. I held.

The traffic cops were finishing up their daily ticketing sweep of cars whose hapless owners had left them charging on the street at the beginning of rush hour. That free charge was going to cost three hundred bucks and maybe a tow if they didn’t get out here before the hauler did.

Finally Adams came on the line. I explained. I thought he’d be skeptical, but all he said was to stay put and he’d send a constable.

I needed to get home.

I needed to wait for the constable.

I needed a coffee.

And I needed to see what a ruthless killer looked like, so I went inside the coffee shop.

When it was my turn I asked her for my usual, “Americano please. Medium. Black.”

“Single,” I was trying to be arch. She didn’t bite. She went about her business with the machines. She didn’t seem to recognize me. Why should she? Last night when I wasn’t cowering in the back seats and peeking over the front seats of a car with tinted windows, I was on its plush floor mats barfing my guts out.

It was hard to believe this woman, who with short brown hair, home-spun, girl-next-door looks - with light freckles even - could charcoal-broil a stranger in cold blood. For some stupid reason I thought she’d have nauseating body piercings, tattoos, purple hair, b.o., black lipstick, trashy clothes and maybe a studded dog collar around her neck to complete the ensemble, not be someone who’d pass for a stereotypical volunteer in an old folks home. I was stupid.

She deftly squirted a shot of espresso into a paper cup and then swung it under the hot water spigot. I was half expecting her to heat it up with a blast from her ray-gun. I was extra stupid.

I paid, left, and waited for the constable on the sidewalk a tad out of view of the coffee shop.

The illegally parked charging cars were all gone now, but there were still lots of people on the sidewalks determinedly trying to get home. That’s what I should be doing. I sipped some coffee,

“I’m Constable Catherine Logan and this is Constable Brian McFarland,” She motioned to the gray, middle-aged man standing beside her. Two constables. Adams must be worried. “Where is she,” Constable Logan asked?

“She’s behind the counter in the coffee shop. Short brown hair” I glanced towards the shop.

“We can handle it from here,” she prodded.

There was a break in traffic. I ran across back to the subway entrance. I had to get home.