The B3 and the small buildings game 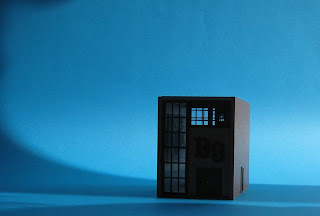 The B3 has been an interesting project for me. I usually have a few on the go, ones I ‘should’ be making progress on, and others that I’ve started more or less on a whim. The whim ones more often than not turn out to be more fun and surprising. That was certainly true for the B3. Once the basic building was glued up, I lifted off the old dictionary I was using to hold the walls down on the floor during the drying phase, had a good look at the project, and, presto!, I got an instant feeling of goodness from it. I still need to add lighting, a bit of roof and interior detail, and a little light weathering, but I liked how it was shaping up. 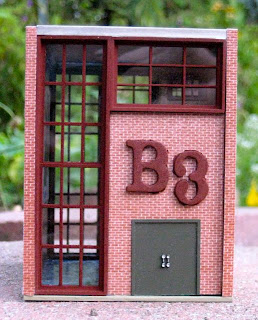 As for construction, all the pieces, except for the floor, were cut from 0.020 inch styrene; the floor is 0.080 inch. The L-shaped windows on the ends were glued up from Grandt Line O-scale moldings. All the other window and door moldings are HO-scale Tichy Train items. The brick paper is from Micro-Mark. The B3 letters on the end walls are foam items that scrapbook hobbyists use that I picked up at Michaels’ and painted to match the main windows. However, I’m a little ambivalent about them and they might get scraped off. 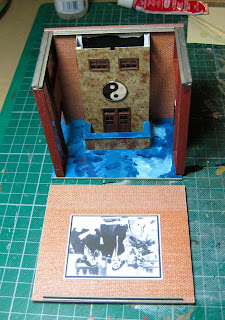 Over the Labour Day weekend I learned about H.G. Wells’ 1911 book Floor Games (You can find a copy of the text here). It’s a charming description of games he and his young sons played based on ‘building’ cities and towns and landscapes on the floor of their house using wind-up trains, tin soldiers, wood blocks and other found objects. I’ve been thinking for awhile that the projects I’ve been working on like the B3 aren’t model building projects at all, and reading Floor Games made me think that these projects are more the result of game play than model building. Some sort of ‘small buildings game’ following Wells’ lead. 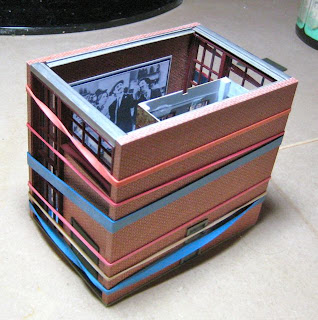 The game is pretty simple once I started to think of the activity in those terms. The game pieces are: 1, a selection box of HO-scale window and door moldings from Tichy Trains (some other brand or set would do just as well); 2, some miscellaneous window and moldings that I’ve bought because they were either on sale or looked interesting or both; 3, some miscellaneous sheets or pieces of styrene – some with molded patterns like metal siding or bricks; 4, brick papers; 5, paints. Also, some figures and vehicles are good to have around for scaling things. A well stocked spares box comes in handy too but isn’t a strict necessity. Some basic tools for making styrene models are needed. 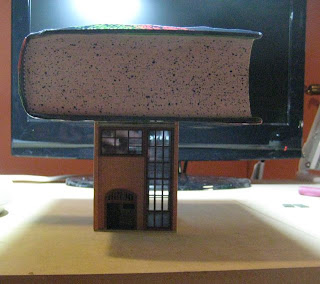 The ‘game’ involves fiddling with the pieces to find arrangements that seem interesting and maybe meet some need for the layout. For me, I usually have a starting idea and then play around with the pieces to try and make it happen, but usually what actually occurs is some other configuration arises based both on the original idea and the parts – basically, game play changes preconceived ideas. There really aren’t any rules, just as what is described in Floor Games doesn’t seem rule bound. One gets a sense of how to proceed by just proceeding with what’s on hand and seeing where that goes. In Floor Games, Wells goes on at length about what happens during a game and its outcome, but doesn’t elaborate much on rules. In more conventional terms, the small buildings game is a type of scratch-building, but without an emphasis on replicating a particular real-world object, or even being close to similar to a real building. 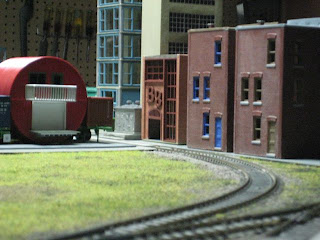 Anyway, I think I’ll park the B3 project for awhile and move onto some layout work.
Posted by J D Lowe at 5:06 PM