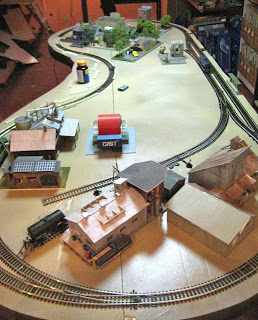 I decided to build the city section like a jigsaw puzzle. There are two types of pieces: 1) buildings on bases that aren’t glued to the board; and 2) landscape pieces that are glued down and butt against the building bases to hold them in place. For transport, the buildings can be removed so they don’t get damaged. The landscape pieces are held in place with rubber cement so that if I want to change the arrangement I can peel them from the board fairly easily. On the other hand, all the plastic track inserts used to make the snap track look like it’s embedded in concrete are superglued in place after some sanding and fitting to make sure they don’t interfere with the operation of rolling stock.

After looking at the evolving urban area on the left, and the Moore-ian country area on the right, I realized the train board was developing what one of my old painting instructors called ‘a two-ness’. This was a term she applied to paintings that had two objects front and centre without any connection to each other or other visual elements– it makes the painting look un-unified. Since I also need a program track for the DCC system, I plan on running a track from the right-side industrial area into the centre, ending close to the urban area. Along with the ocean front, scene transitions, and some careful placing of the track inserts in the straight section of the main loop, the passing siding and the new central straight, I think this additional track section will help join things up into a unified whole. This new track section will also create a switching problem which may add to operational interest: it’ll take two short locos to move cars into the central straight section. Certainly not prototypical, but it should add to the game play aspect. 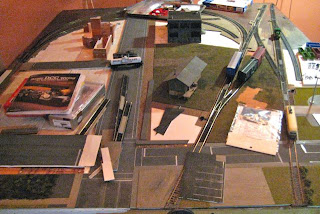 [I’m cannibalizing the old layout for parts. I plan to salvage as many as possible and then disassemble the train board. I’m going to modify its wheeled stand a little so it can be used as a stand for the new layout when it’s in the basement since it won’t be permanently living upstairs. It’s sad to see the old layout go, but I’m liking the way the new one is developing. This blog was named because the old layout measures 6 x 5 feet and had 30 square feet of train space for what I then imagined was going to be a layout situated in Ontario – well, at least have many visible characteristics I associate with Ontario. Hence, the ’30 Squares of Ontario’ name for this blog. Maybe I’ll need to rename it. Maybe I’ll just keep it as a relic.]