Museum and gallery and studio 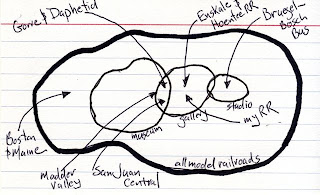 My inner nerd likes to classify things, so I made this Venn diagram, in the style of those in Indexed, to show where my thinking is on this whole Museum and Gallery thing. I introduced a new subset, Studio, for objects that have some resemblance to model railroads, but aren’t, and don’t feature actual running trains. I think members of the Studio subset are mainly art objects. I put the Brugel-Bosch Bus in this group. It’s clearly art. It has tracks and trains. But they don’t operate. It’s not hard to imagine that they could be made operational, but that would change the nature of the entire piece.

I’ve only indicated placement of model railroads that I’ve touched on in this blog, so it’s in no way complete, and probably very debatable anyway 

Classification schemes are ultimately a losing game, and thinking too much about them usually degenerates into arguments about what goes where; what’s in and what’s out; categories to include and exclude. The list of problems is endless. All schemes have to be worn lightly to get the most out of them, and if not, discarded.