The part that got away 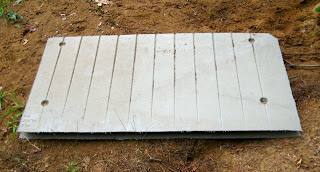 Two years ago I had to replace my old, weather-beaten pumphouse – well, pumphouse is a rather regal term for what amounts to a big box that shelters a pump from the elements. After lots of humming and hawing and cogitating about what to replace it with, I finally settled on simply buying a small RubberMaid outdoor storage shed kit, cutting out the floor, and popping the whole thing, kit-and-kaboodle, over top of the pump on the foundation where the previous pumphouse stood (and if my wife is reading this, it should be noted that she did play a big role in figuring out which of the many shed kits that are on the market to buy when I couldn’t make up my mind  ). It worked like a charm and has been through two winters so far. It still looks and works as good as new.

And after those two winters I still had the section of floor I cut out stashed in my junk pile. 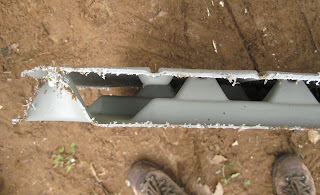 Well, this last summer I finally realized that my junk pile was going on forty years old, and was starting to make our place look like a candidate for an episode of Hoarders! I separated out some useable stuff, and carted the rest off to the junk-yard (10 trips and 3 Saturday mornings in all with our poor cars stuffed to the gills with ratty old junk).

My regret is that I took the floor section on one of those fateful trips and I have it no more. 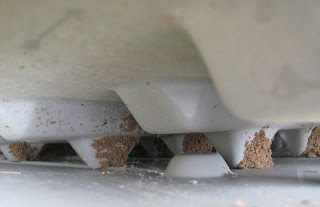 Even though I was hauling junk to the dump I was also thinking about how to build the base for the layout. That scrap floor section was speaking to me. It was light. It was rigid. It had lots of interstitial spaces for plumbing wires through. It was plastic. All good things. But it wasn’t completely flat – if it was a piece of wood for sale in a store, I would have put it back on the shelf and selected another. In this case it went to the dump. My mistake. I now think I could have reworked it a bit to make it a little flatter, and maybe useable.

I obviously used a more traditional approach to building the layout base. It’s got the flatness and rigidity I want, but it weighs more than I’d like. Weighs way more. In retrospect, I’d try an experiment where the upper surface of the train board would still be made of 2-inch thick high density construction foam board, but the lower box frame used for stiffening and wiring infrastructure would be something like the floor scrap from the pumphouse. 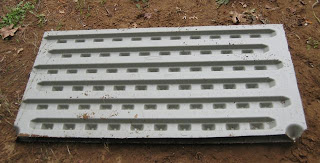