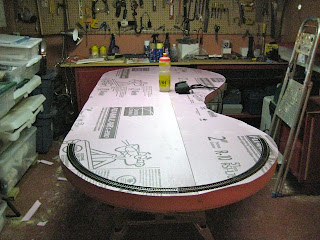 [Ok, I got back to work and trimmed the foam back to the perimeter of the hardboard substrate and smoothed its edges with sanding blocks. Although it can be carried by one person, it takes two to safely turn it over. Thankfully Debra didn't mind helping me. Next step for the weekend is painting, laying the track, and getting the DCC installed.]
I knew that E. L. Moore had written an article (maybe even articles) on how to build an entire - but small - model railroad, and since I’m doing the same thing I tried to find out what he did. One thing I found out was that Mr. Moore published a three-part model railroad construction article in Railroad Model Craftsman called The Enskale & Hoentee RR, with the first part appearing in the October ’68 issue. Basically, the series explained how to build a small – 30 inch x 30 inch – N-scale railroad running through mountain scenery. Well, it wasn’t purely N-scale, it could also run HOn21/2 equipment (which uses N-scale track), and was populated with TT-scale buildings as well as N-scale ones, hence the railroad’s name. Also, in true Moore-ian fashion the cost to build it was low – Mr. Moore stated it could be built for around $50 in 1968, which is about equivalent to $325 today – and only required 2 ‘unhurried’ months to construct.
That first article in October started off with a little statement from Mr. Moore about his reasons for building this charming little railroad:


And on my pike, as though a mixture of N, TT and HOn21/2 wasn’t enough, we have a horse and wagon era into which contemporary rolling stock intrudes: and had that little beauty, Rapido’s old time gaily painted locomotive been available at the moment I bought my motive power, you might have seen a further scrambling of time. You can put me down as an opportunist rather than a purist.

As it stands. mine is purely a subsidized railroad, makes no pretence of industries nor is it scouting for any. Tourists, maybe, since it is little more than a scenic park railroad. True, there is an outside curve on the southwest corner where a mine structure could rear its ugly head and be placed extending over the track - could, but never will. For when I dropped my tools and picked up my camera I was through! No matter what writers and editors say about a railroad never being completed, this one is!

You might wonder why I built such a small pike in the first place, when the bigger they come the harder you fall for them. And frankly it was because I was suddenly smitten by this petite little N scale, and then too I wanted to see if my old love affair with HO might be rekindled to include N in a bigamous union. And too, I wanted to try my hand at scenery again; and being both too old and too lazy to put forth any great amount of effort, I confined myself to as small a pike as I thought practical.

This, of course, is strictly a pike for beginners or others who do not take their railroading too seriously; who are content just to own and run a couple of engines and a handful of cars, but still want something at which they can point with pride. Anyone can build this little pike, but if scenery happens to be your dish it can be made quite spectacular for so small a layout. If it doesn’t disillusion you too much, look at it this way. Just how much railroading would you expect from a space 400’ x 400’, or an area scarcely larger than a city block, and with less than half a mile of track? For, as I said, it is little more than a scenic park railroad. But somehow, as you look at it and the little train comes ‘round the mountain you sorta forget that aspect and your imagination takes over.


I can’t imagine an article like this being published today in the mainstream model railroading press, although it sort of fits with today’s micro-layout movement. I admire its good-natured stance and forthrightness in building something that seemed interesting to the author even though it was rather unconventional. Now, the practical side of me thinks RMC may have commissioned Mr. Moore to write an article on how to build a modest model railroad that a reader in October could have more-or-less ready by Christmas (which is my goal too). He could have easily chosen to build something in a single scale on a rectangular piece of plywood as is the convention, so they may have been rather surprised with the result. Although some might not classify the The Enskale & Hoentee RR as a model railroad – and even Mr. Moore seems to back away from that saying it’s not for ‘serious’ model railroaders - but I’d simply say that it’s in the Gallery school of thought rather than Museum.
Posted by J D Lowe at 7:56 PM