I'm going to finish off the diecast series with one long post of the leftovers. Those two Hot Wheels motorcycles used to have training wheels attachments that would allow them to race down the orange track, but those have been lost to time. I'm pretty sure I have a trike as well in some box around here. 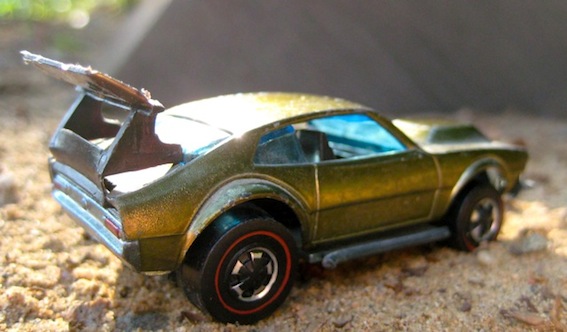 Ah, the Hot Wheels Mighty Maverick. This was another of my favourites and luckily it too is intact. That giant rear wing was the highlight for me. Well, just about any car with an airplane sized wing bolted to the trunk caught my attention back then. The proto-aerodynamicist in me I guess. I considered the Richard Petty SuperBird the ultimate in automotive big-wing technology. I don't know if there was a Hot Wheel of that thing, but I did at one time have a model kit, but, alas, it's lost to time :-(

I found this other picture of the T-Bird misfiled somewhere, so for completeness I thought I'd post it. 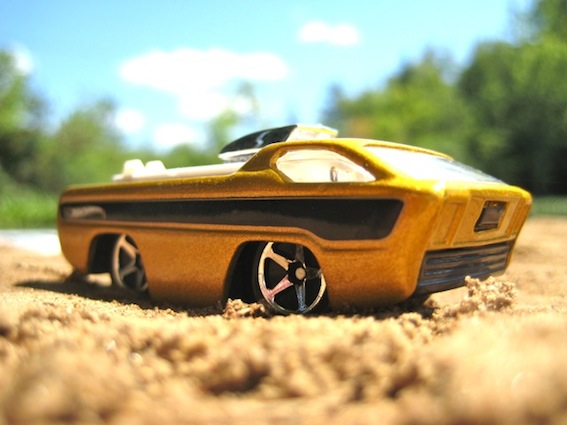 The Deora is my favourite custom car and this is Hot Wheel's Deora 2003. 'Nuff said. 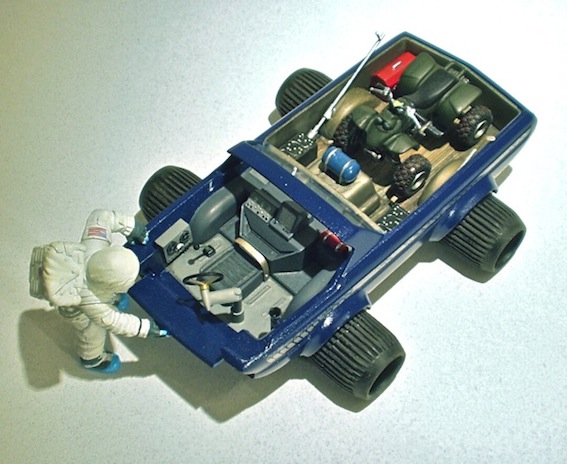 While I'm on Deora memory lane, back in maybe 2005 or there abouts, I kitbashed this lunar hot rod from 1/24 Deora and Moon Scope kits from AMT. No, the ATV in the back isn't gas-powered. It had all that removed and converted to electric :-) Looking back on this thing I think lunar dust would have gummed up all its works and left it inoperable.

The green Hot Wheels Hot Heap over on the left is the closest to mint condition of all the old cars in this collection - I think that's because it didn't get raced much. Original colour. Windshield intact. Straight axles. All signs of not much use.

This Hot Wheels '68 El Camino is virtually brand new compared to most of the other Hot Wheels shown here. Back in 2011 I was picking up some things for my father at a Zellers near his house, and decided to drop by the toy department to see what was new in the Hot Wheels world. I thought seeing the El Camino was a good omen as I'm a big El Camino fan. It's too large for the layout, but I'll think of someway to incorporate it into the Alta Vista TC.

I think this Hot Wheels bug was originally my sister's. We had a coding scheme where we used flower-power decals to identify her's. It's missing its engine.

The Hot Wheels Lotus Turbine. And following the trend that if a wheel is missing, it's missing from the rear on the driver's side. Ok, in this case the driver's side is both sides :-) so let's say on the left.

These are fairly new Hot Wheels T-bird convertibles and they had a supporting role at The 2016 LOL Bring What You've Got Car Show held along Ocean Blvd.

When I bought these Hot Wheels Radio Flyer and Express Lane cars not all that long ago I recall they reminded me of MPC's Zingers kits.

This Johnny Lightning Sunbeam I think dates from '98 or thereabouts. A excellent rendition and a favourite.
Posted by J D Lowe at 4:23 PM