The E. L. Moore Files: The Buddha, The Bookery and The Man Cave

While down by the railroad yard one day who should I come upon but Uncle Charley, standing in a weedy, vacant lot. “I own this lot,” he says, “and I want to build a little shack here so I can sit and mediate in peace. You’re a builder. Build me something.” Just like that. Uncle Charley has always lived with his brother George; but George’s wife, Ma, is sometimes short tempered about having two retired railroad men underfoot. I could understand his wanting a place of his own....
[And so E. L. Moore opens the story of Uncle Charley’s Bookery and its construction.]

I usually start these sort of posts by saying how back in the ‘70s I tried my hand at building such-and-such a project by E. L. Moore, and moaning about how it was too much for me then, but how decades later I tried again, and lo and behold, I could build it and had a good time doing so. Well, this time, the last part is true, but the part in the ‘70s isn’t. I didn’t even learn about this Bookery thing until a couple of years ago, but when I tried it, it turned out to be one of my favourite projects. Still is.

Here’s the letter of introduction E. L. Moore sent along with the Bookery manuscript to Railroad Model Craftsman. The transcript follows. 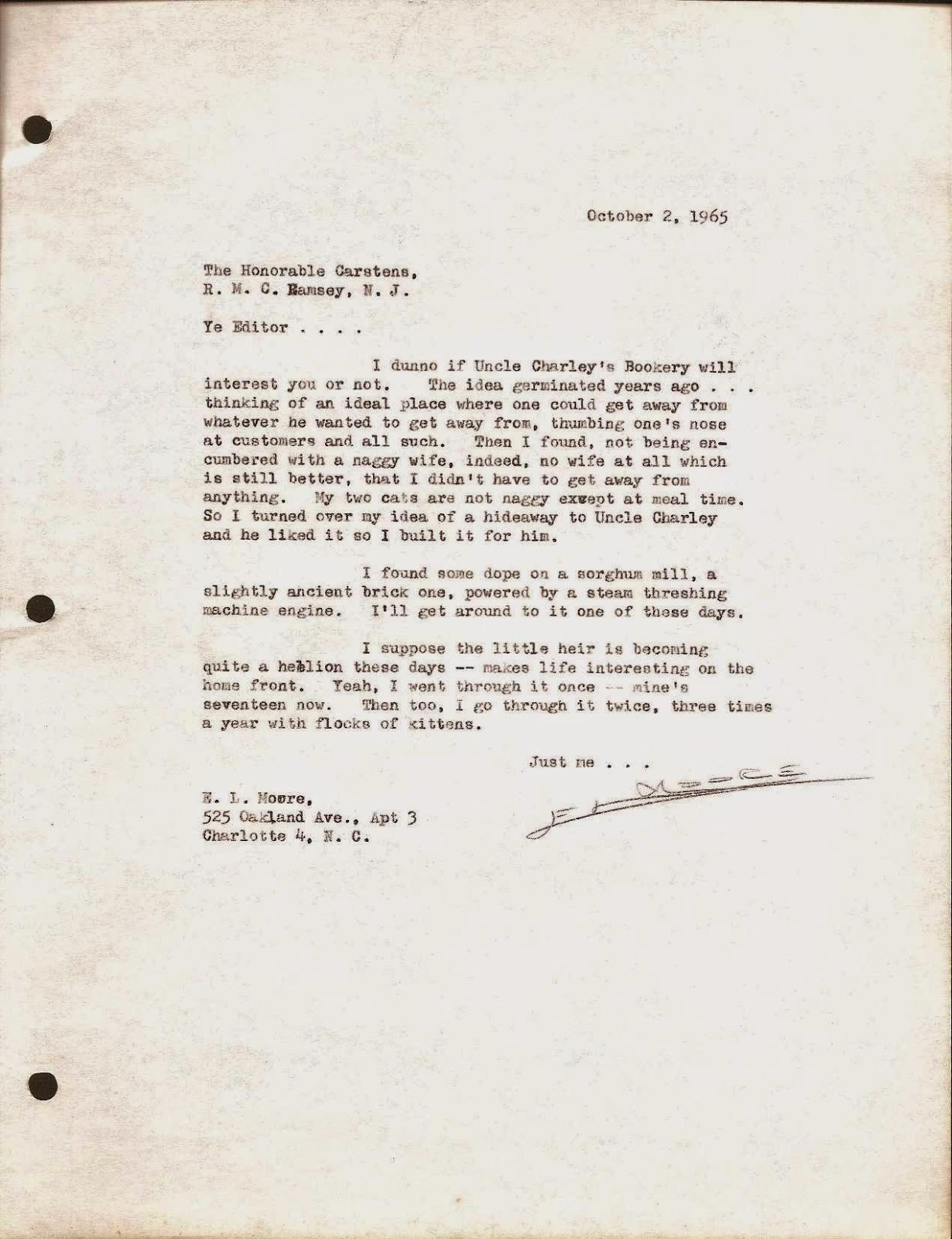 I dunno if Uncle Charley’s Bookery will interest you or not. The idea germinated years ago ... thinking of an ideal place where one could get away from whatever he wanted to get away from, thumbing one’s nose at customers and all such. Then I found, not being encumbered with a naggy wife, indeed, no wife at all which is still better, that I didn’t have to get away from anything. My two cats are not naggy except at meal time. So I turned over my idea of a hideaway to Uncle Charley and he liked it so I built it for him.

I found some dope on a sorghum mill, a slightly ancient brick one, powered by a steam threshing machine engine. I’ll get around to it one of these days.

I suppose the little heir is becoming quite a hellion these days -- makes life interesting on the home front. Yeah, I went through it once -- mine’s seventeen now. Then too, I go through it twice, three times a year with flocks of kittens.

The Bookery manuscript accompanying this letter appears to have been reproduced without changes in the published article. Given that the article was submitted in October ’65 and published in the December ’65 issue, maybe it was used to fill a hole in a production schedule and there was no time for the niceties of reflection and editing.

Story-wise, it’s right up there with his classics. I read it again and one of the asides deals with how he based the structure on Benjamin Franklin’s Printing Shop in Philadelphia. Mr. Moore spins a bit of tall-tale and notes that he got the plan for the building when he bumped into Mr. Franklin himself at the post office, and during some grumbling about the price of stamps, got Franklin to draw it on postcard. I seemed to be plum out of postcards, so I tried asking Mr. Google instead, and in the process stumbled across this interesting image that is noted to be the facade of Franklin’s print shop. That section with the bay window and front door bears a striking resemblance to E. L. Moore’s model.

.... but I was thinking in terms of a tarpaper shack, so when he showed me a history book picture of a brick-fronted shop ... “But the cost?” I protested. “Hang the cost,” says Uncle Charley expansively.
[The full scope of Uncle Charley’s project is sinking into our narrator-builder.]

I also found the idea odd. A substantial brick building for what would today be called a Man Cave, maybe along the lines of the ones shown in this book about Australian men and their sheds I bought from a used bookstore years ago. 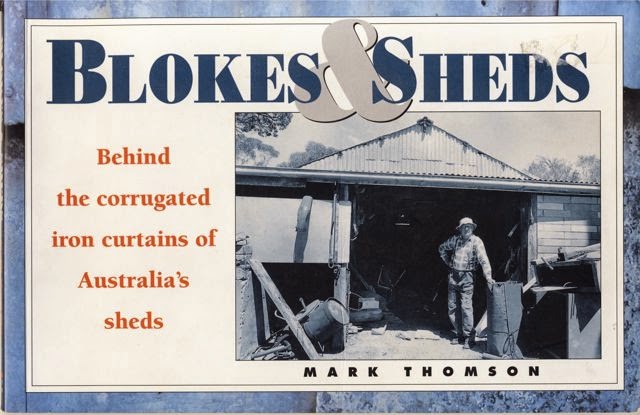 [Blokes and Sheds by Mark Thomson. Published by Angus and Robertson in 1995.]

They aren’t tarpaper. They’re built mostly from metal and wood. Not a brick one in there. No bookeries either. Mainly various types of workshops, with a rumpus room and a boxing ring thrown in for good measure. E. L. Moore, being located in the southern USA, might find that these sheds from Australia would likely fit the climate, although all that metal construction might get pretty hot in the summer.

And that sorghum mill he mentioned in the letter? My guess is that it’s the Moe Lass’ Old Sorghum Mill project that appeared in the April 1966 issue of Railroad Model Craftsman. I built that one too - but, again, not in the ‘70s :-) - although I converted it to a Barbecue restaurant. Mr. Moore must have liked that building’s shape because he basically used it again, but with larger windows, as the basis of Uncle Peabody’s Machine Shop that was published in the June ’72 issue of Railroad Modeler. 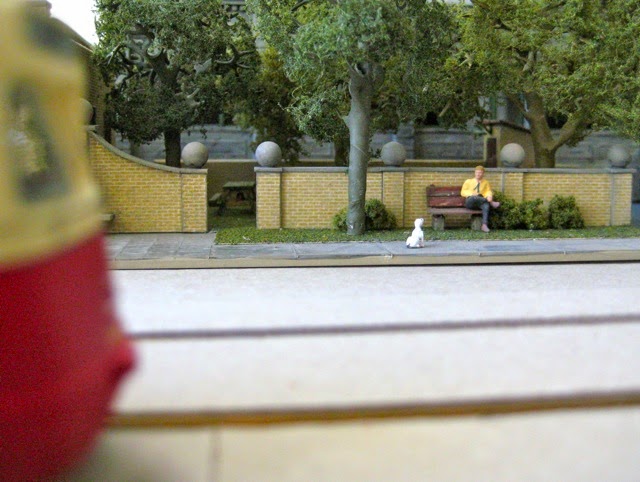