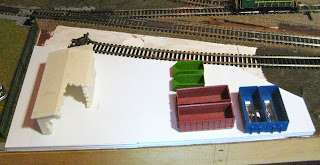 A while back I mentioned that I’d try and camouflage the board-top track controls a la the example set by New WopiLand instead of moving them to a dedicated control panel. After thinking about what I had on hand, I decided to build something based on the idea of using Walther’s dumpsters as the camouflaging element. Basically, I’d cut out their bottoms and place them over the controls.

Well, as usual, I had to do a little more site preparation than I had originally thought to pull this idea together. Since the controls sit flush on the train board, I raised the surrounding area a bit with stacks of ¼ inch foamboard, and then laminated a sheet of 0.040 inch styrene to it for construction of the finished surface. I also added a new siding for bringing in car-loads of junk for recycling in the Boneyard, and adjusted the level of the Boneyard site to be roughly level with the floors of those cars. 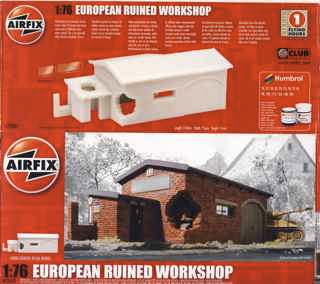 I recently saw an ad for the Airfix European Ruined Workshop. This item is a basically a 1/76 scale model of a bombed-out building for World War II war gamers and diorama builders. Nothing really to do with trains, but I liked its look and the idea that you could look into and through it. Luckily my local hobby store had some in stock because I had an idea for using it in the developing Boneyard scene

It’s not a kit, but a one-piece resin casting of an entire building. The only parts to be attached are two window frames and a little clear plastic window ‘glass’. Other than adding those, all that it needs is painting. And the back of the box it comes in has a handy painting guide: recommending none other than 15 ! different colours of Humbrol paint.

The European Ruined Workshop is a nice piece: crisp moldings, solid construction, interesting subject – all and all it’s rather good. The down-side is cost: $28 + sales taxes + all those paints if you go for the advertising. Given my respect for E.L. Moore projects, it’s the anti-Moore as far as cost goes. Given its simplicity, something similar should be scratchbuildable for a third the cost at most, and probably less if I thought about it some more.

Ok, well, grumblings aside, the next step is to start assembling the scene.