Track in the Valley 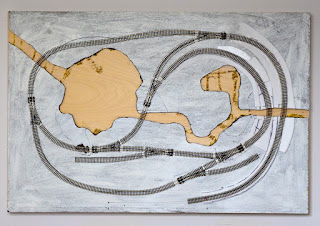 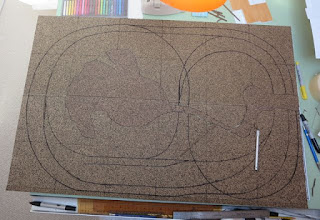 Don't listen to him. Of course this is a model train layout that's being built, just don't take everything you see being done here as gospel. A couple of years ago I made a start on the EVRR by gluing a cork base to the panel with the lake and river cut out. I had a rare blast of foresight at the time and kept the cut-outs. Well, I dug them out of the storage and glued them back in. 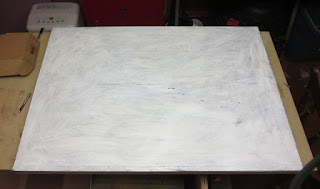 I had to get rid of those old, wrong layout lines, so I painted the cork with Zinsser white primer. I painted a little corner of the cork first to see if the paint attacked it, then after sitting a few days, all seemed stable, so I painted the entire panel.

What it is is the physical embodiment of Mr. Moore's ideal world: the rural world of 1890s and 1900s America, complete with his love of trains and railroad stuff. It's his world. A small portion of his mind and soul made real. That's the prototype. Is that worth replicating today? 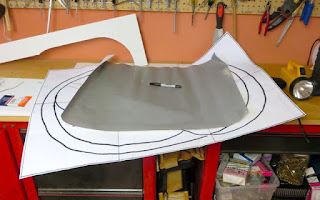 I used a sheet of graphite paper to transfer the track plan to the primed cork. It's the grey sheet and it cost $1.79 at a local art supply store. 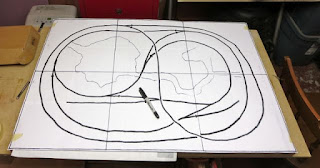 I taped the plan to the panel and slipped the graphite sheet between them - graphite side facing the cork of course. Use a pen - I used a capped Sharpie - and trace the plan. Use firm pressure, but don't press too hard or the papers will tear. 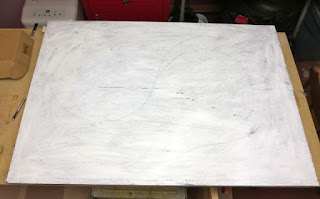 When you're done you'll see some faint lines. At this stage I only drew in the valley's track. 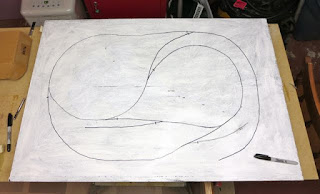 I used the Sharpie to darken all the lines. 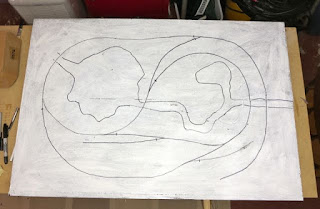 Then the outline of the water features were drawn in using the same process. 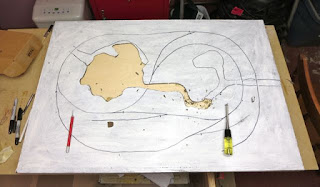 I cut out the lake and rivers with a chisel and X-acto knife. 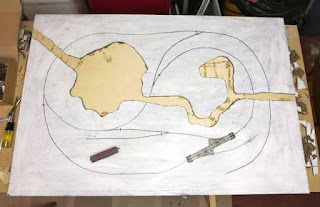 It sort of looks like the digestive tract of some strange animal who I think needs to see a gastroenterologist pretty soon. 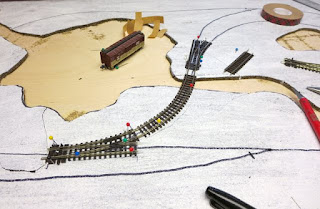 Ok, let's get down to the business of track laying. All the pieces were laid with more-or-less the same procedure, so this example is typical. I started in the centre, positioned two neighbouring switches with pins, and then bent and cut a piece of flex track to join the switches. I used a Xuron track cutter and it works great. 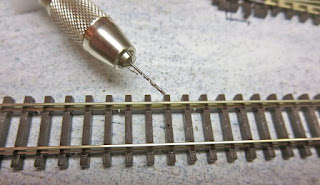 Before final installation some of the flex track ties were drilled out to accept pins. The switches come with two holes already drilled and I just added one more in the tie at the switch's entrance. Then transfer tape was rolled out on the cork where the track goes. Ok. It's now time for the part where I didn't have a third hand to take pictures. Press the switches and flex track onto the panel into the tape and then insert pins into the tie holes. Maybe the pins are overkill. I don't know for sure if they're needed because the tape seems to hold things quite well, but I wanted that extra assurance a mechanical connection provides. 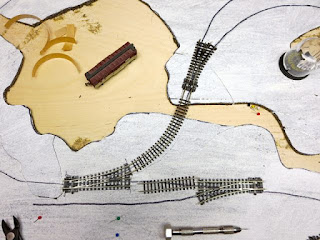 The pins have a little ball on the end, so you need to cut that off with a pair of side-cutters. Don't use your Xuron track cutters! The blade will be damaged and you'll no longer get good, clean track cuts. A couple of years ago I ruined a pair when I was lazy and used them to make a 'quick snip' on some wire. It was an expensive snip. 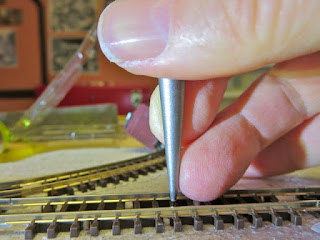 There'll be 2 or 3 mm of pin stub sticking above the tie. Use a nail set to press the pin into the panel. 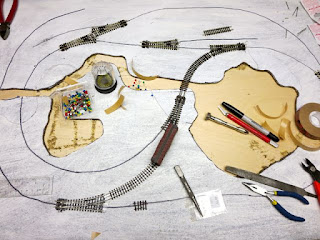 I wasn't always able to get the track to lie exactly on the lines because I tried to make sure the rail joints from one piece to the next - especially at a joint with a switch - were as smooth and kink-free as possible. So there was a bit of fiddling and fitting and adjusting needed to make that happen. I didn't always succeed 100%, but the joints are fairly smooth and trains seem to run ok. 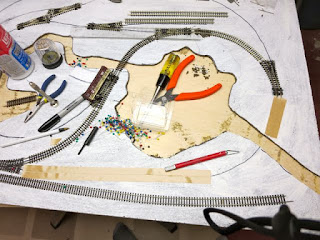 I used Peco code 80 flex track. I found it wasn't as flexible as Atlas, and I suspect the way I'm using it in this project amounts to contorting it way beyond what's considered normal by the manufacturer. For awhile I thought I'd use Peco ST-5 and ST-6 Set Track switches with Atlas flex. Problem was, the ties are thinner on the Atlas flex, and I'd have to shim them to have an nice even surface when connected to the Peco switches. That cinched it: those Peco switches and Peco flex. 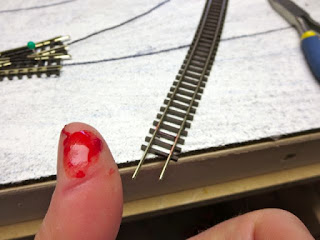 While I was pushing a rail end on that long piece in the previous photo, trying to get a nice tight joint between two rails, I punctured my thumb with the rail. I have a desk job and my fingers don't have the calluses of honest work, so twisting and pushing rail constitutes hard labour. While I get some Bactine and bandaids, I'll leave you with one of my favourite singers.
Ok, well, now that I'm back, let's keep on trackin'. 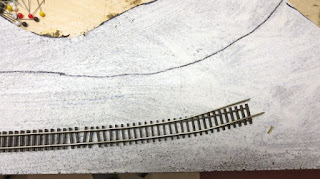 I twisted the piece too much and the rails popped out from the molded-in spikes. I couldn't re-seat the rails and had to start over with a new piece. This happened a couple of times during this project. I had to learn the hard way to be more gentle with the flex. 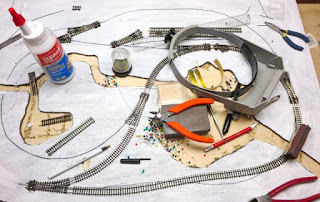 On the second try, everything worked out ok. Well, only ok, not perfect. I had to make some off-plan adjustments to get smooth transitions from one switch to the other. That's a tight curve over on the right, but trains roll over it without issue, so I'm ok with it. 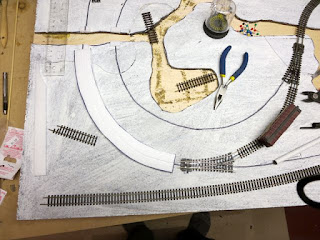 Over on the other end of the layout, the return loops are at a slightly higher level than the track looping the lake. The terrain elevations were cut from foam sheet. That one up there in the photo is 4mm thick. I bought some foam sheets from the hobby store for these, but I think meat tray foam would work ok too since it has the same density as the store-bought stuff. 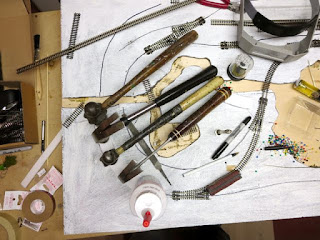 It's hammer time! White glue was used to attach the foam to the cork base. While drying I broke out the hammers and used them to weigh down the foam. 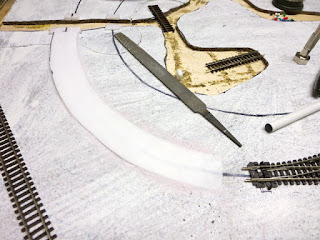 After the glue dried, grades were sanded into the foam to get nice smooth elevation changes. I used a sanding block. 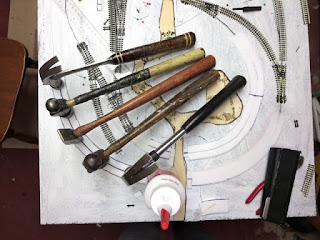 Installing the other foam pieces followed the same procedure. The inner loop foam is 2mm thick. On E. L. Moore's layout I think both the inner and outer loops were the same height, but I can't tell for certain from the photos. I think it looks a little better with the loops at slightly different levels. 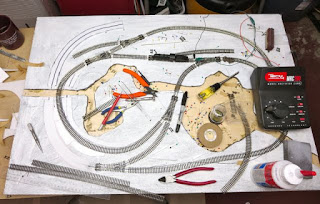 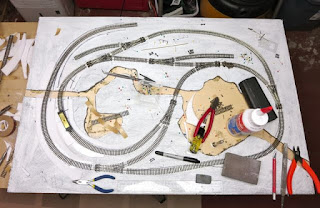 I had a bit of luck and found some old-style, 35' wooden boxcar models on sale at the local hobby shop's resale table. I don't have the coaches finished yet, so they were unavailable for track testing. I shot a little video during testing of some blocks.
One thing I found was that cars need to be older prototypes - 35 footers or so - and their couplers need to be truck mounted. 40 foot boxcars seemed to handle the curves ok as long as couplers were truck mounted, but I haven't done much testing with longer cars. The problem with body-mounted couplers was that the wheels jammed into the coupler box on the tighter curves. 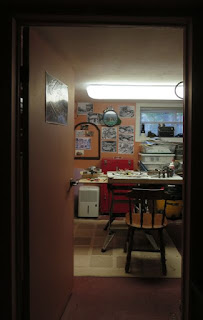 One last thing. As I built my way through the valley I got a sense that this layout is more sophisticated than I had realized. It’s electrically blocked so you can run a couple of trains, maybe three. There’re places for them to go. Not a lot, but some.  There’re many places to build small scenes to detail to your heart’s content. There aren’t too many places for buildings, but it’s easy to change the scenes with alternatives you might have around to try out different looks. That all seems important.  I want this little layout to be close to E. L. Moore’s original, but I also want to be able to have enough flexibility to support some other scenes and configurations. It shouldn’t be a dead, static thing, but something that can still be the stage for new ideas. That’s my recommendation if you decide to build some sort of tribute layout based on an old plan: don’t think of it as dead and sealed in amber, but as something to riff on as well as honouring a great, past idea
Posted by J D Lowe at 7:06 PM