There was a brief discussion in the comments section of the E. L. Moore on Brevity post about the type of building presented in the A Fort by E. L. Moore?  post. I mentioned an unpublished article by E. L. Moore, Shades of Buffalo Bill, I recently came across in his files that described a model much like the one in the Fort post.

Shades of Buffalo Bill was submitted to Model Railroader on 15 July 1968. Unfortunately for Mr. Moore it was returned, and did not get submitted elsewhere or see publication. The manuscript contains no model railroading material, so rejection seems a foregone conclusion. It’s a relatively short and lightweight story about how he built what we might consider in this day-and-age a stereotypical cowboys and Indians table-top diorama based on classic Airfix figures and some scratchbuilt buildings and scenery. 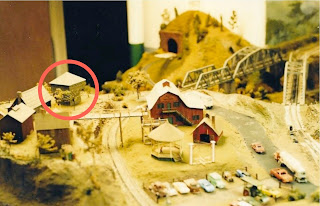 [At one time, the Fort resided on the layout of E. L. Moore's friend, Fred Kelly.
Photo courtesy of Paul Zimmerman]


Frankly, I think Mr. Moore was taking a bit of a breather with this piece. In April he submitted an epic-sized manuscript for the Enskale and Hoentee layout to Railroad Model Craftsman: 34 manuscript pages, 10,350 words, 30 photographs and 17 sheets of drawings along with an additional manuscript on how to kitbash some coaches for that layout in what would be published as Easy Narrow Gauge Coach which added another 1,100 words, 2 photographs and a sheet of drawings. Right after Buffalo Bill, in October ’68, he submitted the first of what he and Hal Carstens would refer to as his ‘fantasy’ builds: The Molasses Mine and Factory.

The notes accompanying the Buffalo Bill manuscript indicate there were also 3 photos and a sheet of drawings. These are missing. Without the photos I can’t say with 100% accuracy that the blockhouse described in this manuscript is the Fort, but the description is quite similar to what’s seen in the Fort photos. So, without further adieu, here is the Shades of Buffalo Bill manuscript.

[30 December 2016 update: There was a photo found of the setup described in Shades of Buffalo Bill and you can see it here.]

Cowboys and Indians, anyone? With a wagon train and some cavalry thrown in for good measure? We can give it plausibility by stringing it to the occasion of a centennial or holiday celebration. It can really be fun too, although you probably wont’ be able to devote a card table top to your spectacle as I have, but then my set-up is only meant to give you ideas for your own smaller space. 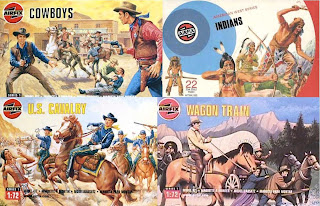 As many of you are aware, Airfix is a source of quantity figures at a price -- from 35 to 45 well molded plastic figures for only 50¢, with a choice of cowboys, Indians, wagon trains, cavalry and many other subjects. All that’s needed is to paint them. According to instructions the figures should be first washed in a detergent, then rinsed and dried. That little item of information escaped my notice, and I painted mine just as they came from the box, with Floquil Railroad Colors, but with no ill results. I did try Floquil’s Barrier on some, this being necessary as an undercoat on Poly-styrene, but it flaked off when dry, so I just painted them as I came to them not wasting a great deal of time on any one figure. And, in some of these sets you get a variety of the finest horses available anywhere, standing, trotting and running, some with saddles and others in harness.

Additionally, Merten and Preiser have sets of more detailed and painted figures of cowboys and Indians, albeit naturally more expensive. A. B. Boyd Company was the source of my Preiser cowboy and Indian figures, the band, the set of four wigwams, and the stagecoach. 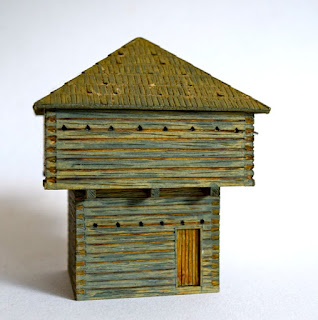 For years I’ve wanted an excuse to do the Tennessee blockhouse which I found pictured in THE KENTUCKY RIFLE by Dillon -- and so the opportunity came. This is built of balsa at a cost of only a few cents plus a couple of evening’s work. The pole fencing, as shown, was built of June grass stems with balsa posts.

So it’s hardly worth while to list a bill of materials.

We’ll begin with the blockhouse which has walls of 1/8” balsa, and whose lower section is 16’ x 16’ x 12’ high (in HO, of course). Logs are simulated and square cut, the divisions being deliniated with a sharp hard lead pencil in the absence of an electric burning pen. Corners are beveled and the butt log joints are faked as shown in the drawing. A floor of 1/8” scribed balsa is installed with a ladder leading to the upper section.

The upper overhanging section is 22’ x 22’ x 9’ high and is constructed in the manner just described. Gun ports are placed at intervals each side a heights indicated. The photograph shows the placing of the upper beams and method of joining the two sections.

I weathered the structure with a gray oil and turpentine wash, and gave the door a contrasting wash of raw sienna and brown. It will probably be necessary to use brown ink to deliniate the log divisions and butt ends after supplying the gray wash. Short bits of wire will do for gun barrels protruding from the gun ports.

Should you want to make your own Indian tepees I am giving you a drawing of one similar in size and design to the Preiser ones, although it’s hardly worth while with the colorful set of four selling for only a buck. All tepees are patterned to a similar half circle design, but often with smoke flaps attached. I’ve never seen this bird wing smoke flap except in the Preiser tent, but it’s graceful and adds to the looks of the finished wigwam. A handful of what night be brown dyed broomstraw is included in Preiser’s kit for use as tent poles. Whisk broom fibers might be used should you make your own. And in any case here’s a few pointers in setting them up. Run a dry ball point pen or similar instrument down each line and bend until tepee will fold around and stand after flap is cemented. I cut the finest poles in two, each about an inch long and pasted them along the lines inside letting each protrude about half an inch. This done, I cut a circle of 1/16” balsa 13 1/2’ in diameter, shaped the edges to a slanting octagon shape and fitted this inside the bottom of the tepee, fastening it with cement. After cementing the smoke flaps in place at the top I attached two long poles to the top ears or tips and that was that. Water colors can be used to paint bands of colors with here and there an animal or head drawn in for good measure. They’ll get lots of attention.

As mentioned, I built my pole fence of June grass stems, selecting ones 1/16” in diameter or less. I usually got about two 50’ lengths from a stem. When dry these are quite strong. Make posts as shown in drawing, of 1/16” square balsa, add short pieces, then cement the other post on. Thread five such double posts onto five 50’ stems, space and cement, then add a top rail. A stiff half inch strip of paper to the bottom of every other post will make the fence stand up. Paint stems and posts with gray railroad paint. Such a fence may not be quite up to prototype with its 50’ poles, but if you prefer to do it the hard way that’s up to you.

For grass I used finely sifted green sawdust into which some green flock was mixed and all the actors in the drama, including the horses, have their bases well covered. Painting of figures need not be too carefully done, and in the case of the Indians a variety of gaudy colors seemed most desirable. Goo appeared to work out best in making riders stick to their saddles.

Kids of today really have it made. When I was a lad I had to use beans and kernels of corn for my characters -- plus a lively imagination. But it’s a lot more fun, I find, when one has realistic figures with which to work. And the fact that I could capture the results of my playing in a photograph afterwards added to the enjoyment. That I’ll get paid for playing does nothing to detract from the pleasure of it either. 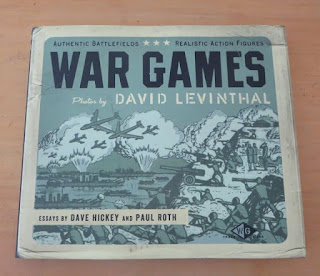 [The book War Games by David Levinthal presents a selection of his photos of war scenes staged with miniatures.]
Capture the results of my playing in a photograph is more-or-less what artist David Levinthal did in his series of photographs called Wild West. Ok, well, I suspect there was a little more to it than that as his playing was somewhat different than E. L. Moore’s. David Levinthal has created a series of photographic works of table-top scenes utilizing toy figures, such as the Airfix and Marx figures, to illustrate and comment on war, historical events and pop culture using pop cultural artifacts. Hitler Moves East, IED and Wild West are three of his most famous series. Mr. Levinthal has revisited the Wild West series 5 times over the course of his career making it one of his most deeply explored ideas. These little figures can be used for many purposes and likely have more waiting to be found by some future artist or modeller.
Posted by J D Lowe at 2:14 PM