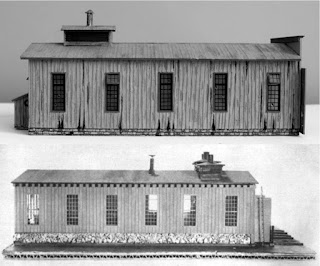 In doing a little research on engine stalls and such I discovered one thing ... you can put an article out in less than 2500 words that used to take three or four times that. Eric Stevens in an old issue of MR used two issues to tell about his three stall engine house. Every minute detail was explained. Nowadays we’re inclined to skip a lot of that and give the reader credit for figuring out a few things for himself. But at the same time I did enjoy some of those lengthy dissertations by George Allen that went on issue after issue ... but they’ve had their day.
Extracted from E. L. Moore’s 16 Oct ’72 cover letter to Denis Dunning, editor of Railroad Modeler, that accompanied his manuscript for the Home for Small Locos article that appeared in the Mar ’73 issue of Railroad Modeler.

The Eric Stevens article E. L. Moore is referring to is Three-Stall Enginehouse that appeared in the January and February 1953 issues of Model Railroader. E. L. Moore’s model seems rather similar to Eric Stevens’. I like the extensive and detailed drawings in the Stevens article. They seem to be well integrated with the text and make the series  more graphic oriented than text oriented in its explanations. Interestingly, part 4 of George Allen’s long running Tuxedo Junction series appears right after the first instalment of Eric Stevens’ article.

I agree with your thoughts on the shorter articles, some of these how to give much more than most people care about. And yes, I too loved the stories by George Allen, but it is a rare individual that had the writing gift like his.