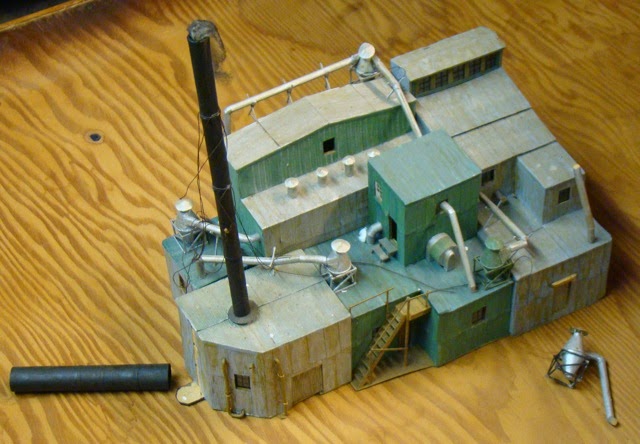 E. L. Moore built a manufacturing complex called the HOJPOJ. MFG. CO. - which I believe is meant to be pronounced, ‘Hodgepodge Manufacturing Company’ - that appeared in the April 1968 issue of Railroad Model Craftsman. Recently, half of that model has been found, and what’s left is shown in the lead photo.

Mr. Moore drops a couple of clues in his article about the prototype and its whereabouts: there’s a photo of part of it in the article, but the only discernible signage is the partial ‘BARNHA’ and ‘MFG.’ printed high up on the water tower, and there's his opening comment that “...this factory is only a few minutes walk from where I live...” My friend Google tells me it’s actually a 14 minute walk. 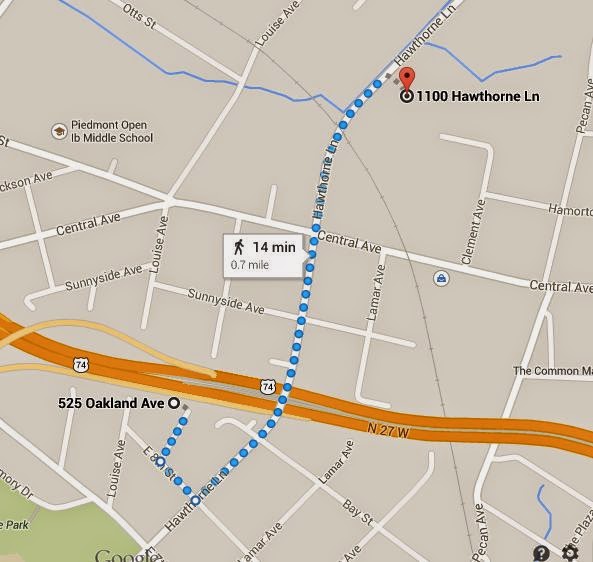 Putting the pieces together, the prototype was most likely the Barnhardt Manufacturing Company that is located on 1100 Hawthorne Lane in Charlotte, N.C., around 3/4 of a mile from E. L. Moore’s residence at 525 Oakland Ave. The company website states it was opened for business in 1900 - just as E. L. Moore notes in his article - and grew and expanded and diversified over its long life.

[What's at the site of the HOJPOJ facility today according to Google Streetviews.]

Now, E. L. Moore’s model isn’t an exact replica as he notes in the text. First, he designed the model’s footprint to fit into a 9 inch by 9 inch area, so there was a lot of selective compression applied, and second, he notes that of the two major parts that make up the model, the two-story main brick building, which is the other half that’s missing in the model photos, is something he made up to “rise above the jumble of units and achieve some sense of balance.” 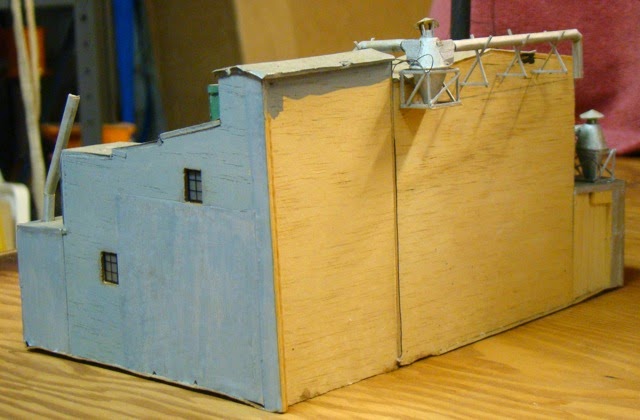 [That unfinished wall is where the two-story brick building attaches. Photo courtesy of the owner.]

So, the half shown in these model photos is his interpretation of pieces of the actual Barnhardt Manufacturing facility as it appeared sometime in the mid-1960s, and the half not shown - which the model’s owner informs me he has - is something Mr.  Moore added to make the whole look right. The model is a good example of using a prototype for inspiration, squeezing away the irrelevant stuff with selective compression, and applying some artistic license to pull together a visually interesting and balanced model.

25 April 2016 update: I was given the HOJPOJ and you can read about how it was restored in this series of posts.
Posted by J D Lowe at 5:18 PM