A review of Kim Adams’ AGO Exhibition 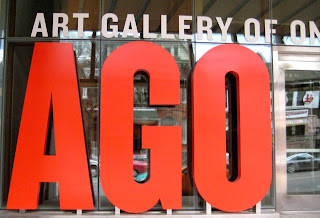 Back in March Debra and I were in downtown Toronto. While she attended to her business, I went down to the Art Gallery of Ontario to see the new Kim Adams show.

There are two pieces on display: a big diorama called Artist's Colony (Gardens), and a much bigger stand alone “ship-in-a-bottle” type model railroad / spacecraft / farm equipment piece called, Travels Through the Belly of the Whale. 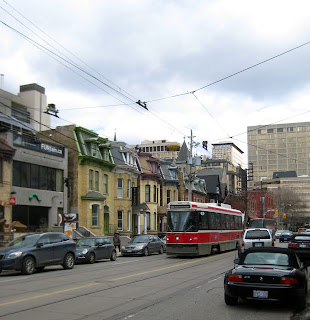 [The Dundas streetcar goes right by the front door of the AGO]
The diorama is located in the AGO’s Thomson Collection of Ship Models gallery, which as the name makes clear, is full of excellent ship models, and Artist's Colony (Gardens) is located in a little brightly lit nook at the bottom of the stairs leading to the ships. Surprisingly, the light down there is rather low and gloomy – other than the bright, clear light over the Artist's Colony (Gardens) – and doesn’t do justice to the ship models.  I thought the placement of Artist's Colony (Gardens) in this gallery rather odd, but maybe it’s the only place it could be properly lit, and possibly the gallery staff figured all models belonged in one place (there are boats in Artist's Colony (Gardens) after all). Artist's Colony (Gardens)  does make for an interesting contrast to the traditionally constructed ship models, and, if there weren’t any practical constraints, it would have been better placed in the centre of the gallery under spot lights instead of tucked away in a alcove. This might be more dramatic, and would require visitors to snake their way through the ships, toward the brightly lit diorama. This would also allow visitors to walk around all four sides of the diorama. As it is, only three-sides are freely accessible, and the fourth is against a wall. 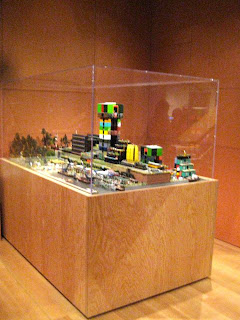 [Artist's Colony (Gardens)]
I won’t give a detailed description of the diorama, but there are some photos at the AGO site. It’s basically a wild, densely packed, free-lanced assemblage of scenes built up from HO scale model railroad components – the operative word being ‘free-lanced’, followed closely by ‘wild’. Its production values are high, and clearly a great deal of thought and care went into its construction. Although I’m ducking out of describing it, I can offer a tip for looking at it since actually spending time viewing its various parts is the most important thing. There’s so much going on in the piece, I needed to look at it several different times. Basically, I’d have a look for 5 minutes or so, wander off to see a few ships when others came by, then wander back to take a look at another section when there were no other viewers around. After a couple rounds of this, I’d wander off to another gallery and then come back and repeat the sequence. So, view it in several short sessions, taking a good break in between. I think that way you can avoid being visually over-saturated by the density of the thing and get a better appreciation of the whole. But, I can’t guarantee that this odd behaviour won’t get you flagged as suspicious on a security camera :-)

Artist's Colony (Gardens) is sort of reminiscent of a side of model building that isn’t seen much anymore. Back in the ‘60s and early ‘70s monthly hobbyist periodicals aimed at scale model builders like Car Model magazine often featured projects and models that weren’t so much meant to be replicas of prototypes, but were imaginative what-if exercises – often rather wild and exuberant ones at that. The model railroad press wasn’t immune either, although the free-lanced stuff seen there was nowhere near as wild as what the model car builders were up to.


These days free-lancing - whether extreme or mild - and imaginative explorations in model building seems rather uncommon. The detailed representation of actual prototypes with models is dominant, and far more advanced from a technological standpoint than it was 40 or 50 years ago, and its wilder cousin – the Yeti of the model building world - is elusive and relatively hidden. It’s too bad that this kind of thing is not as easily accessible as those long ago Car Model pages. Having to go to a gallery to see this sort of thing instead of in a magazine I could once buy at a corner smoke shop seems like an unfortunate development. But, maybe I’m just looking in the wrong places – it wouldn’t be the first time :-) 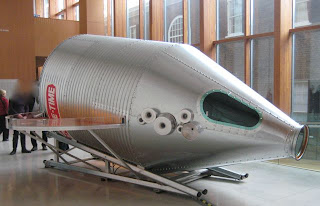 Yeap, that’s right, the bottle is the hull of a spaceship built from farm equipment. As soon as I saw it, the conical front part said Gemini capsule, and the cylindrical back part – that houses the layout – said Apollo Service Module. But unlike either the Gemini or Apollo spacecraft, this structure has clear, stubby wings where the model train loops out and back into the bottle. Also, the spacecraft has large windows to the interior where the nose-cone and the rockets would go, as well as a smattering of smaller viewing ports.

Unlike Artist's Colony (Gardens), Travels Through the Belly of the Whale is carefully staged in its own gallery. The natural lighting is excellent, and there’s lots of room to walk around the piece and get a good look from many different angles.

I’m not much into finding meanings in art works. Basically, I’m happy if I like looking at them. I think art works should stand up without ancillary explanatory material.  If I don’t find something interesting to look at, I move on. Back when I was in the 5th or 6th grade in the early ‘70s, our class was taken on a day trip to the AGO. There was one gallery where the ‘art’ consisted of a bunch of rusty old chains strewn about on the floor. As we entered we all dutifully gave it a studious look for a few seconds and most, like myself, probably then wondered when we were getting lunch. Once our guide had everyone corralled around the chains, she asked if anyone could describe what they meant. My friend Rob, who was off to one corner of the group raised his hand and gave what seemed like some sort of sophisticated answer. Our guide was stunned by such an articulate response, so she naturally followed up by asking how he knew that. Rob promptly told her he read it off a little card on the wall. The kids laughed. The guide went red. And so went my introduction to finding meaning in art. I can’t say that this apocryphal story has influenced me to this very day, but it has stuck around in my memory as a lesson of some sort.

All I can say is that I find both of Mr. Adams’ works quite interesting and fun. It’s probably because I’m intrigued anytime someone uses common place objects to make things that weren’t intended to be made from them, and Mr. Adam’s work is a highly inventive take on using every day, utilitarian objects, and the common materials of traditional scale model building, to construct fascinating things. If you’re in the AGO part of Toronto before the exhibit closes on 11 August, I’d recommend seeing these pieces.
Posted by J D Lowe at 8:09 PM