And now for some silliness.
In most of my posts about HO buildings I focus on construction, but I’m not going to do that here because I tried something a little different construction technique-wise with this project that seemed like a good idea, but doesn’t quite seem that way in retrospect. So, any construction photos should be taken with a grain of salt as to whether you want to use the same methods  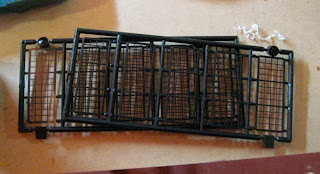 I’d like to say that this project, and others I’ve built, just magically popped into my mind from some model railroading muse. Far from it. They usually start with me rummaging around my spare parts box, unbuilt kit collection, hobby stores, or my junk pile just looking for interesting stuff. Same thing happened here. I bought these window moldings at George’s Trains last year because they looked interesting and were cheap. I had no idea what they’d be used for. Although, these days I’m in a frame of mind where I’ll buy just about any window moldings that seem intriguing – I bought some O-scale ones at a show a while back for just that reason. 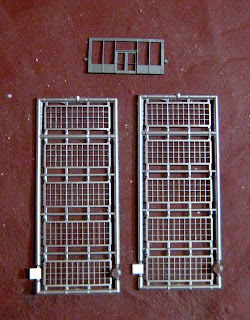 One day I decided to cut the window frames from their sprues and play with them like puzzle pieces. I shuffled them around looking for some pattern that looked good. Some arrangements seemed ok, but nothing ‘clicked’. I got bored and set the pieces aside. 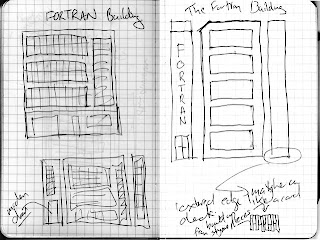 At times I thought about the project. Sometimes I doodled a bit. After all this pump priming, one morning the arrangement that became the FORTRAN building did all of a sudden pop into my head. 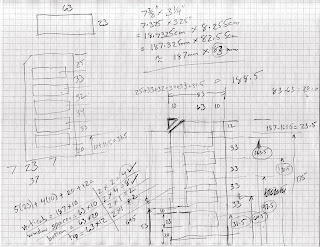 Still, no big deal. It’s not like it’s a cure for cancer. But, I think interesting things can happen when there is less planning, more playing with whatever is on hand, and then going in whatever direction that takes you. It can be a good approach for more than just model building. 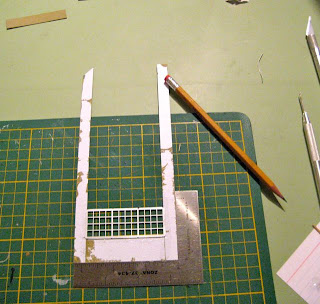 The other thing with this project is I wanted to build it fast – well, at least faster than my usual approach which is quite slow, so I kept the building fairly minimalist so I could keep it moving. In those old articles by E. L. Moore, he always reminds the reader that his projects can be built in just 2 weeks. I’ve always failed miserably on that score. I have other things going on. I’m waiting for sub-assemblies to dry. I get distracted watching tv. I start other projects. 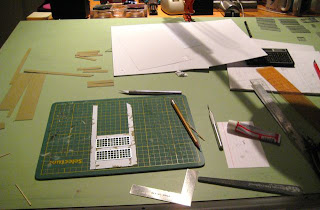 And so on. And so on. I’m an infinite excuse machine. I started actual construction on this project on 8 May and finished on 20 May. Mission accomplished! I decided to be an obsessive with this project and I made note of how I spent my time: 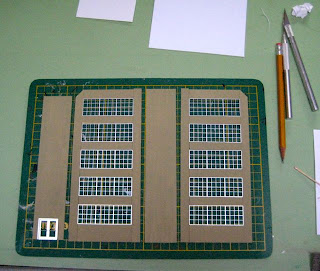 8 May: cut out all pieces for the walls; painted all pieces.

9 May: glued all wall and window pieces into complete walls; let dry.
10 May: cut out clear window panes; reinforced walls; glued 1 pane into place; made lots of dumb mistakes and then stopped working before I ruined something. 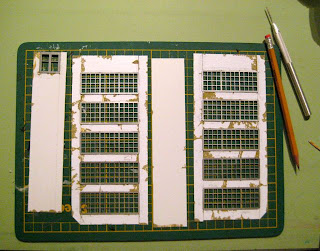 13 May: finished gluing in the window panes; glued all walls together; added view blockers; did some touch-up painting.
14 May: built the roof and glued it in place; applied base coat of paint to roof.
15 May: second coat of paint to roof; built up roof details and painted; puttied some gaps in walls; fiddled about trying to figure out how to build the sign. 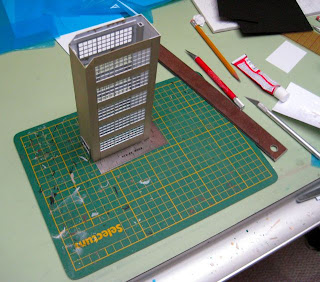 16 May: did some more touch-up painting; figured out how to build the sign and made all the components.
17 May: glued up the sign and installed; installed rood details; did some weathering washes.
18 May: 10 minutes of colour correcting washes to the sign. 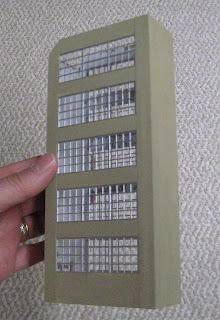 20 May: applied some light weathering washes to the walls.

{Aside: Yes, you’re quite right, the build diary does show that I don’t fully appreciate blogging yet. I still have a default setting in my brain that I don’t post about things I sorta feel that I can’t or won’t finish. This might pass with time, but I’m not holding my breath  Also, I sometimes think that posting about a project while I’m working on it impedes progress, because writing and posting takes time, and maybe also takes away some of the momentum from a build. I can’t prove this. It’s just a feeling.} 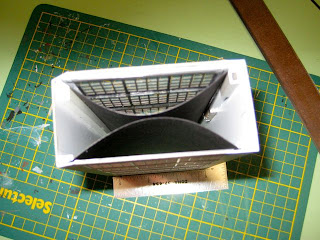 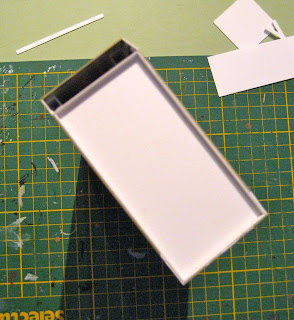 This project was more about an idea instead of detail. I'd like to eventually get to a point where idea and detail balance out. Right now I'm at a stage where there is just enough detail to just satisfy myself that it does seem 'building-like', but more is needed to cross over into the won't-give-it-a-second-thought-it's-a-building zone of plausibility. I'd like to try and go there in future projects. 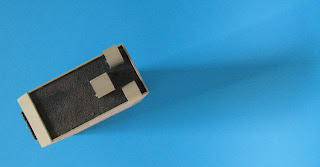 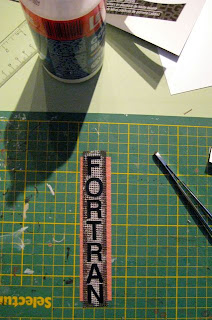 I had some trouble building the sign. What resulted was something too garish and sort of too big. There wasn't much I could do about the size short of rebuilding, but the garish colour could be easily corrected. I re-painted the most offensive parts - the overly red brick - with washes of Poly Scale aged concrete mixed with flat black. This calmed things down a bit and returned some sense of stability. 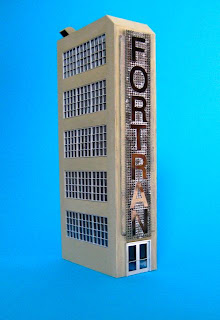 At one point I thought I’d use a couple of old computer punch cards to make the main walls. I looked high and low throughout the house to see if I had any relics stored away with my old junk. No such luck. As a kid, my father brought home a bunch of discards and I used them for the siding on the Mineral City Depot and Perkins' Produce. I thought for nostalgia value using some real punch cards on this project would be a nice touch. Since that didn’t work out I designed the main walls to have the dimensions of a punch card, and used some Poly Scale Aged Concrete paint to try and mimic the colour. 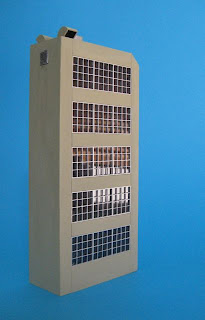 Well, there you have it. Finally, a build completed in 2 weeks! Now I just need to figure out what sort of freight car to use to haul all those translated formulae 

J D Lowe
At 30 Squares I write about making miniature things with detours into a few other arts, crafts, and sciences.

I see a saw problem 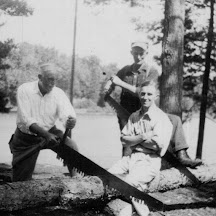 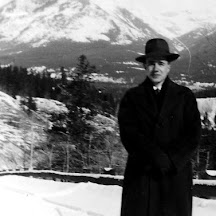 What's in the feed? 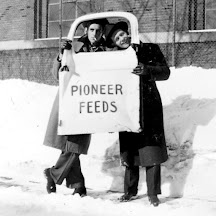 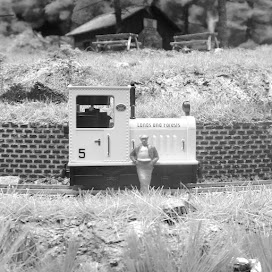